House Minority Leader Nancy Pelosi (D., Calif.) gave a rant on the definition of the term "scapegoat" after she was fooled by a parody account for Gen. Michael Flynn, who announced his resignation as White House national security adviser on Monday.

"While I accept full responsibility for my actions, I feel it is unfair that I have been made the sole scapegoat for what happened," wrote the fake account, which is in no way associated with Flynn. 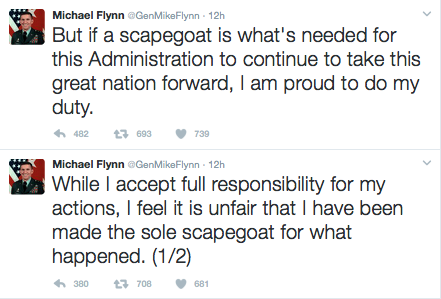 Pelosi, fooled by the account, decided that the public needed to be told what a scapegoat was.

"Do you know what a scapegoat is?" asked Pelosi. "It means in a community where people want to absolve themselves of guilt, they get a goat and they heap all of the ills onto the goat and then they run the goat out of town."

"So the inference to be drawn from his statement is that other people have blame that should be shared in all of this," she explained.

According to Buzzfeed, Pelosi was told by an aide that the tweet was fake and reacted in disbelief, asking "what do you mean it's fake?"

Aide tells Pelosi the "scapegoat" Flynn tweet was fake, "what do you mean it's fake?" She says. pic.twitter.com/tLNQswqfpb

The source of Pelosi's confusion appears to have been Rep. Elijah Cummings (D., Md.), who according to the Washington Examiner's Gabby Morrongiello was the one who alerted "Madame Leader" Pelosi of the fake tweet.

.@RepCummings sends out his own remarks from this AM, fails to note that it was a fake Mike Flynn account that sent the "scapegoat" tweet pic.twitter.com/abRcG5XHW4

It was reported on Tuesday morning that other news outlets such as the New York Times were also fooled by the parody account.

UPDATE 2:30 p.m.: Following the confusion caused by the Tuesday morning tweets, the @GenMikeFlynn parody account was suspended by Twitter.

UPDATE 2:40 p.m.: In the ten minutes since it was noted that the @GenMikeFlynn account was suspended, the account was made active again.