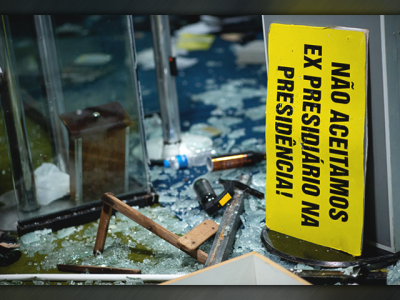 Politico fails to disclose pro-Murphy source is a Murphy donor

The Murphy campaign was put on defense following a report by investigative reporter Jim DeFede, which showed Murphy exaggerated claims that he was a small business owner and a certified public accountant.

The Murphy campaign quickly responded with a lengthy memo saying that "CBS Miami's deeply false story is completely inaccurate in several claims." Its defense was supplemented by stories in Politico and the Sun Sentinel in which two people who know Murphy, one of whom is quoted extensively in the CBS4 report, push back against some of the discoveries made by DeFede.

Both of the interviewees have made political donations to Murphy.

Politico's story quoted Taylor Beery, a former business associate of Murphy, who said that his comments to CBS4 were "taken out of context."

Beery was the owner of Crescent SQ, an oil skimming company that was purchased by Coastal Environmental, the company that Murphy used to label himself a successful small business owner.

Murphy has said Coastal Environment was heavily involved in cleaning up the BP oil spill. The CBS4 report showed that it was Beery's company that won contracts and that Murphy's father purchased Beery's company after it already had the contracts.

It also showed that Coastal Environment was involved in the oil cleanup for seven weeks at most and also that it has likely lost money. Beery told CBS4 that he couldn't remember when he met Murphy but that he was certain that he 'started the concept before I met Patrick."

Nonetheless, Beery had only positive things to say about their work together.

'Patrick was a vital part of the management and success of our small business," Beery told Politico, adding that he characterized the CBS4 report as "completely false."

"Anyone who disagrees with that wasn't there with us on the deck of the skimmer pulling oil from the Gulf in the 95 degree heat of August of 2010," said Beery.

Not mentioned in the Politico piece is that Beery, a Louisiana resident, has been a financial backer to Murphy since his first run for Congress. Beery contributed $500 to Murphy in 2011 and an additional $250 in 2014.

Politico reporter Matt Dixon said he was unaware of Beery's donations, but that he thinks "the story made clear [Beery] was someone who still supported the congressman."

A story in the Florida-based Sun Sentinel also sought to defend Murphy from assertions made by CBS4 that Murphy was never a licensed CPA in Florida and that he was exaggerating the scope of the work he did when employed by Deloitte.

Courtney Connolly, a former supervisor at Deloitte, told the Sun Sentinel that the "suggestion there's anything wrong with Patrick's credentials as an accountant and CPA are incorrect."

"After receiving his CPA license, Patrick was promoted from audit staff to audit senior, where he did important work, and the idea that Patrick exaggerated any of it is absurd," said Connolly.

The story was updated shortly after its initial publication to add the fact that Connolly donated $250 to Murphy's 2011 campaign. Also added to the story was that Connolly left Deloitte only one month after Murphy received his CPA license.

Murphy obtained his CPA in Colorado because he did not meet the standards to take the test in Florida. Without a CPA license Murphy would not have been allowed to prepare much more than simple tax returns.

The Murphy campaign did not respond to questions regarding its involvement in getting Beery and Connolly to contact the press.

Update 5:14 P.M.: This story has been updated to reflect comment from Politico reporter Matt Dixon.