Velshi: 'I'm going to get some tweets from some of you who think you don't want to hear it'

MSNBC host Ali Velshi on Monday urged his viewers to stay tuned to his show while they aired the White House Medal of Honor ceremony, acknowledging some viewers "don't want to hear it" and become "frustrated" when MSNBC airs White House events.

Trump awarded the Medal of Honor to Staff Sgt. Ronald Shurer II, a former Army medic who helped save the lives of U.S. and Afghan troops who were under assault by enemy gunfire during a 2008 mission that was.

"We are going to listen in to the Medal of Honor ceremony. I will tell you, it is important. These ceremonies, this is the fourth one under the president," Velshi said. "I know I'm going to get some tweets from some of you who think you don't want to hear it. This isn't about the President of the United States. This is about Ronald Shurer II, a former Green Beret staff sergeant and an American hero, and that's why we are going to listen into this."

Trump commended Shurer for his heroism in Afghanistan, saying, "Not a single American died in that brutal battle thanks in great measure to Ron’s heroic actions."

Shurer provided aid and helped suppress the enemy fire for five and a half hours during a battle in 2008, ABC News reported:

Shurer was awarded the medal for his actions during the Battle of Shok Valley. In the early morning hours on April 6, 2008, Shurer was one of the last U.S. Special Forces soldiers to exit a Chinook helicopter and land in the Shok Valley of eastern Afghanistan. There was a moment of quiet as the soldiers began to scale a steep hill – when suddenly everything around Shurer exploded.

According to a U.S. Army narrative of what happened next, Shurer’s unit took heavy fire, including rocket-propelled grenades, small-arms and machine-gun fire. The forward assault team became pinned down and sustained multiple injuries. That’s when Shurer sprang into action. Disregarding his own safety, Shurer sprinted through the fire to reach the forward team and treat the wounded.

Shurer’s heroic actions, moving through heavy gunfire multiple times to provide aid to the wounded, saved the lives of all the U.S. soldiers injured in the battle. Shurer is the 11th U.S. Army soldier to receive the Medal of Honor for actions in Afghanistan and the 15th overall from that war.

Shurer was honorably discharged from the Army in 2009 after two tours of duty in Afghanistan and currently serves as part of a U.S. Secret Service counter assault team.

"Today is a truly proud and special day for those of us here in the White House because Ron works right here alongside of us," Trump said.

This is not the first time Velshi has told his viewers to stay tuned for the Medal of Honor ceremony. Back in August, Velshi told his audience that Medal of Honor recipients deserve their time and that they should stay tuned, despite their personal views about Trump. Velshi's comment occurred as he prepared to cover a White House ceremony to posthumously award the Medal of Honor to Air Force Technical Sergeant John A. Chapman.

"I know sometimes some of you tweet me that you’re frustrated when we go to the White House for events," Velshi acknowledged at that time."I will beg your indulgence when it comes to Medal of Honor recipients. These are American heroes who do deserve your time."

"So it is important, and this is sort of what I was sharing with my viewers, it’s important that we pause and we listen to these stories very fully," Velshi said. 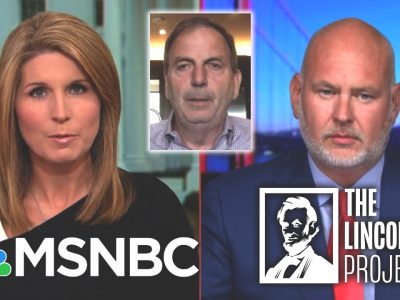