SAN FRANCISCO—Wealthy liberals from across the country discussed strategy and finances this Sunday during the Democracy Alliance’s biennial donor confab, where the number of supported groups grew by more than a dozen and funding targets grew by tens of millions of dollars above previous years.

The Alliance is a hub of liberal and Democratic fundraising. It steers tens of millions of dollars each year to leading political and policy groups strategically vetted and endorsed by its staff of progressive operatives.

"If there was an attack on this building, the Democratic donor base would be gone," joked investor Joe Sanberg. "There are probably a lot of conservatives who would love to drop a bomb on this building."

Security was tight at San Francisco’s Four Seasons hotel, as the group hired its own security to prevent unauthorized individuals from accessing the hotel’s conference area.

It set up disposal bins for "confidential" conference materials, where attendees could dispose of sensitive paperwork for "secure shredding." The group brought along its own paper shredders. 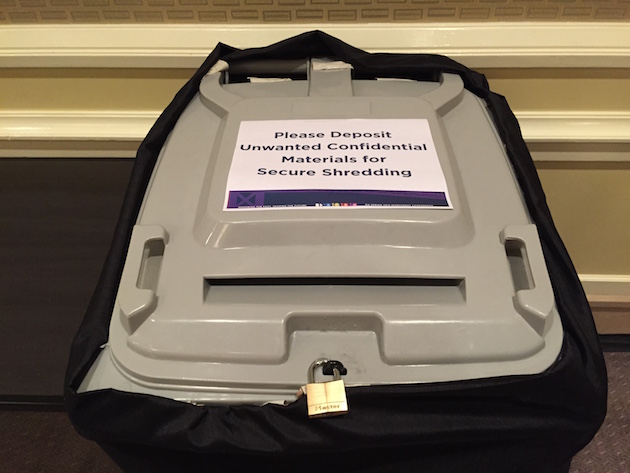 Attendees dined on goat cheese and garlic polenta, sourdough French toast, Kobe beef, and chorizo-stuffed dates. They sipped fine Napa Valley wine. The minimum food and beverage charge for the event was $130,000 according to hotel documents.

"Do you wonder why Elizabeth Warren memes dominate your Facebook feed? Come join us for a discussion of bold and winning strategies to alter the existing economic power structure," one panel description asked of its considerably powerful audience.

Most conference-goers were wary of speaking with the press. One attendee who asked not to be identified said he had been instructed to inform Alliance staff of journalists asking questions about the week’s proceedings.

That is consistent with instructions given to attendees of prior conferences.

"Contact [DA vice president] Ryan Rodriguez … if you are contacted by a member of the media or a blogger about the conference," instructed "participation guidelines" handed out at DA’s November meeting.

"Democracy Alliance conference participants have an expectation that their conference experience and their identity shall remain confidential," the guidelines stated.

The group acknowledges that their pledge of donor anonymity to groups that demand more political transparency is "ironic." It has pledged to increase transparency in its operations, but has also assured DA "partners"—as its donors are known—that they will remain anonymous if they choose.

Certain policy themes animate the Alliance’s conferences and behind-the-scenes collaboration. While present at past meetings, environmentalism was perhaps the most prominent policy topic this week in San Francisco.

Attendees showed up at the Four Seasons in Bentleys, Maseratis, Porsches, and Escalades to hear about the dangers of America’s growing carbon footprint.

Four events featured, or were sponsored by, billionaire environmentalist donor Tom Steyer. One promoted the work of LeadingGreen, a joint venture of Steyer-backed groups including the Natural Resource Defense Council and the League of Conservation Voters.

Clinton’s presumptive campaign manager John Podesta was in San Francisco at the time, where he joined Neera Tanden, president of Podesta’s Center for American Progress, and DA founder Rob Stein for a panel discussion over dinner.

Podesta helped devise Steyer’s political strategy before leaving for a top White House position in 2014. However, Clinton and her relative lack of environmentalist bona fides provided a contrast between Steyer’s strident environmentalism and a likely Democratic presidential nominee who has some environmentalists worried.

As the moneyman with the deepest pockets in the 2014 election cycle, Steyer also stood out among conference events that bemoaned the corrosive influence of money in American politics.

"Big money is drowning our political system after the Supreme Court declared that corporations are people and money is speech," one panel description inaccurately stated. Speaking on that panel was Jonathan Soros, son of billionaire Democratic financier George Soros.

The younger Soros also spoke on a panel on "the electoral arms race." He joined David Brock, the president of Super PAC American Bridge, a post-Citizens United creation. Democracy Alliance-backed groups will "probably break our own records" when it comes to election spending, that event’s description said.

To that end, Alliance documents first revealed by Politico show that the group added 18 organizations to its core list of recommended "investments." It will aim to steer an additional $20 million to that portfolio.