The Lincoln Project, a Democratic-aligned super PAC widely loathed for enabling the sexual exploitation of young men, has abandoned its once-celebrated headquarters in Park City, Utah.

Visual evidence obtained by the Washington Free Beacon confirms that the office space is now empty, save for the memories its former inhabitants made along the way and whatever ghastly demons they may have conjured in the process. 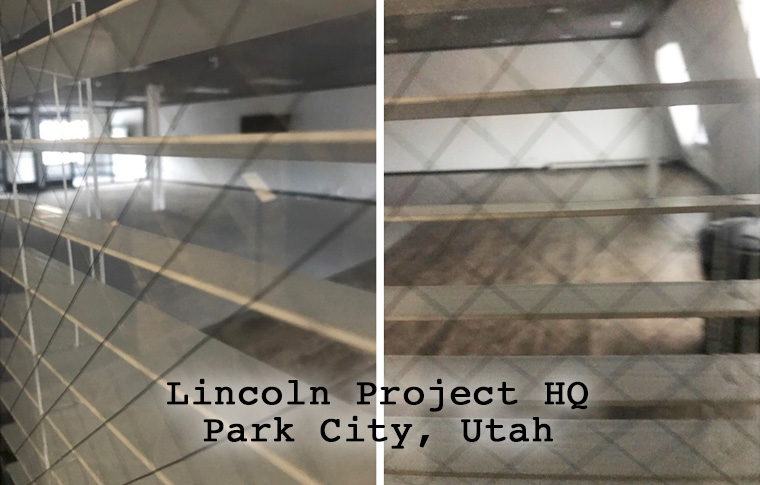 The abandoned headquarters, located in suite 310 at 1910 Prospector Avenue in the luxury ski resort town, was featured in a 60 Minutes segment on the Lincoln Project's largely unsuccessful campaign to defeat incumbent Republicans in the 2020 election.

According to federal election records, the Lincoln Project paid a total of $24,229, including a deposit of $6,923, to rent the office space from B&B Prospector Properties LLC, a Florida-based real estate firm. The group's final rent payment of $3,461 was recorded in May 2021.

The super PAC's official mailing address, according to its website, is a P.O. box in Washington, D.C., near the Capitol building. The Lincoln Project shares that P.O. box number with several left-wing activist groups, including Forward Majority and Defend the Vote. It also shares personnel with those groups and was funded by many of the same left-wing donors during the 2020 election.

The Lincoln Project has been the subject of extreme bipartisan derision since the abrupt resignation of cofounder John Weaver in January 2021. Dozens of young men, including one who was just 14 years old, accused Weaver of inappropriate sexual behavior, such as sending unsolicited photos of his genitals and grooming them by offering career opportunities in exchange for sex.

Lincoln Project cofounders Reed Galen, Steve Schmidt, and Rick Wilson were aware of Weaver's problematic behavior yet only took action after a January report from the New York Times.

In addition to enabling Weaver's sexual predation of young men, the Lincoln Project founders have been widely criticized for running a shameless grift and using shady financial practices to hide their income from public view. Schmidt reportedly bragged that the super PAC, which raised nearly $100 million during the 2020 election cycle, was his ticket to "generational wealth."

Weaver and Wilson, meanwhile, used their Lincoln Project income to pay off massive debts. Records show that both men settled massive tax bills with the IRS and paid off hefty mortgages decades ahead of schedule. According to the Times, the super PAC's founding members were paid indirectly through Galen's consulting firm, Summit Strategic Communications, to avoid disclosure requirements. The firm has raked in more than $27 million from the Lincoln Project.

George Conway, an uncompensated founding member, is among those who think the Lincoln Project is too corrupt to continue in its current form. The super PAC "should shut down, absent full disclosure of its finances," he tweeted in March."There's simply too much money that hasn't been accounted for, and, I fear, never will be."