For weeks Katie McGinty has had to fight back against her opponents’ charges that inhe has ties to the oil and gas industry, and she tried to hide those ties when she was asked about them during a Democratic debate.

Candidates at the debate were asked whether they had received money from the oil and gas industry, and when McGinty answered no she was called out by rival John Fetterman, who released a video hitting her ties to the industry.

Although McGinty presents herself as an environmentalist, she has openly supported using hydraulic fracturing to extract natural gas from Pennsylvania’s vast Marcellus Shale region, calling it the "secret sauce" for economic growth.

This stance explains why McGinty received $2,000 from Walter Hufford, the head government affairs executive at Talisman Energy—the fracking company responsible for creating Talisman Terry, a "friendly Fracosaurus" that made an appearance in a coloring book to teach children about the innovative method of extracting natural gas. 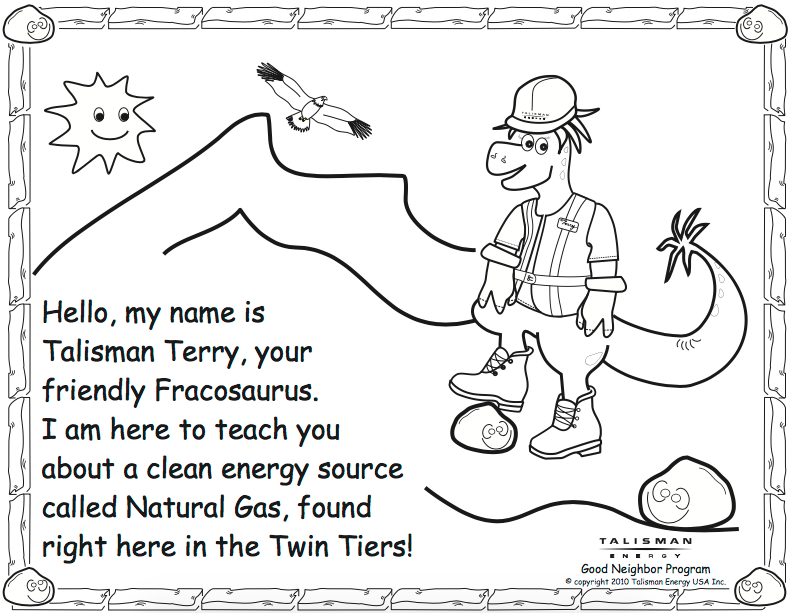 The McGinty campaign disputed the fact that it received money from the Talisman executive, stating that it was actual Walter Hufford's wife Tandy that signed the $2,000 check from the couple’s joint bank account.

Walter Hufford was listed as the donor to the Federal Election Commission by mistake and the campaign has already asked for the record to be amended, it explained.

The campaign also pointed out that the call from Fetterman and Joe Sestak for a moratorium on fracking in Pennsylvania is a big change from their past statements.

Fetterman in September told The Nation that "fracking is here to stay in southwestern Pennsylvania" and that people's "lives depend on fracking." He also said, however, that "we need to tax and we have to have three times the most stringent environmental regulations than we have today."

Sestak has similarly said that "drilling can ensure a common good by offering reduced carbon emissions and less dependence on foreign oil" but that a balance must be found when it comes to damaging Pennsylvania’s environment.

In an interview with Politico, McGinty defended the support she has received from the oil and gas industry but said she has a record that proves she is a fighter for the environment.

"All the candidates in the race have individuals who work in and around the energy industry that are supporting them in the campaign," she said. "The question is: Do you have a track record of fighting for the environment? And I'm the only person in the race with that track record."

Talisman Energy has had "tremendous success" extracting natural gas from Marcellus Shale, controlling 170,000 acres of land in the state and drilling 30 oil wells in 2014.

In an effort to market that success to the public, they introduced Talisman Terry to explain to children just how great fracking is.

The 24-page tale of a friendly dinosaur working the gas drill was created as part of a community outreach program in Pennsylvania where Talisman operated, but grew into a much bigger phenomenon once it was noticed nationally.

The Guardian labeled it "environmental propaganda" created by corporations to target "innocent minds."

Much of the criticism was directed at the book’s depiction of drilling as a simple and harmless process.

"During the drilling process, you may see a lot of big equipment, including a drill rig, large trucks, and tanks of water," it explained. "The area where the well will be drilled is cleared, with the dirt saved so that it can be used later on to reclaim the land. This means it will look the same as before, once the well is no longer in use."

Here's what things will look like before drilling, according to Talisman Terry: 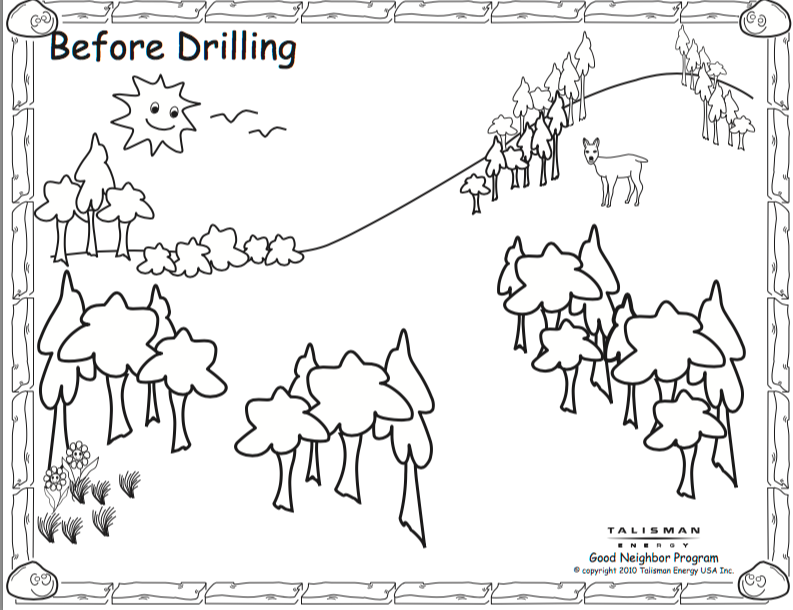 After the fracking is done things are basically the same, except for the addition of an eagle, rainbow, and drilling rig. 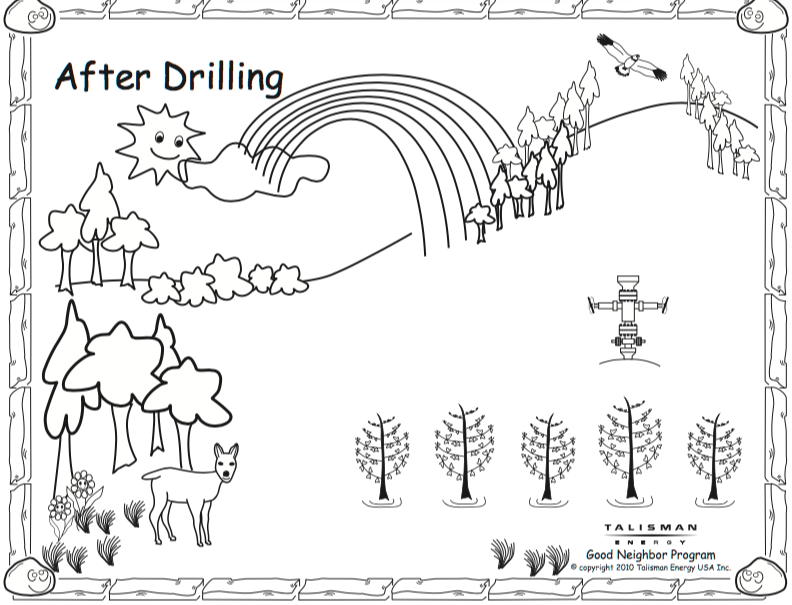 The Talisman Terry book furor quickly grew. Rep. Ed Markey (D., Mass.), a critic of the oil and gas industry, presented it on the House floor as a book where a "lovable dinosaur playfully promotes the benefits of natural gas and paints a picture of a magical world filled with smiling rocks and grinning animals."

"The problem is that unless you are a ‘FRAC-A-SAURUS' named ‘Talisman Terry,' this world doesn't exist," Markey said.

The controversy came a head when it was picked up by liberal comedian Stephen Colbert. You can go to the 2:45 mark to watch Colbert destroy Talisman:

Talisman pulled the coloring book shortly afterward, although they maintained that things were blown out of proportion by the media and that there were no complaints from actual members of the public.

"We're going to take our company's focus to where it should be," a company spokesperson said. "We're not going to continue to dispute the intent of a children's coloring book. There's two sides to every story, but it's not something that we're going to be disputing … it's an activity book for young children."