Harris: 'I could not have done anything I did without that level of organized, smart activism on the outside'

Sen. Kamala Harris (D., Calif.) praised Black Lives Matter activists for their  "incredible" and "smart" activism during her Wednesday night Comedy Central interview, saying their demonstrations enabled some of the accomplishments she made on criminal justice reform.

"One of the benefits that I believe the system received and that helped me do the work that I was able to accomplish was because of the incredible activism and smart activism of folks, like the folks who were Black Lives Matter," Harris told Trevor Noah. "The folks who were involved on the outside who were saying and demanding that the system would change, demanding and marching and advocating."

"That activism allowed me to then be able to do some of the work that I accomplished. I could not have done anything I did without that level of organized, smart activism on the outside," Harris said.

The admiration for that "activism on the outside" from Harris doesn't go both ways, as many prominent activists in the black community have expressed doubt about her presidential campaign because of her actions as a California prosecutor.

Johnetta Elzie, one of the lead organizers of the 2014 protests in Ferguson, Missouri, responded to Harris's presidential launch by telling Slate she was "not excited" about her run and criticizing her reluctance to back body-camera legislation in California.

"Having lived through the experience of protesting in Ferguson, and knowing the impact body cameras could've had on catalyzing our 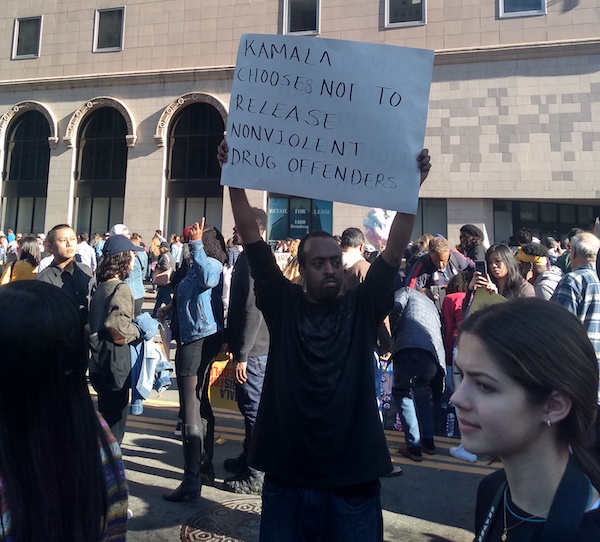 Outside her January campaign launch in Oakland, there were a number of black protesters voicing frustration with her record as a prosecutor.

"Kamala chooses not to release nonviolent drug offenders," read a sign held by a man outside her launch rally. Another sign, from a woman who referred to Harris exclusively as "Copmala," hit her with various critiques, including that she "supports inmates slave labor," "supported three strikes," "invested in keeping private prisons full," and "broke state record for incarcerating black men."

Another called for more "green jobs, not jails."

Harris has worked to redefine herself as a "progressive prosecutor," coming out in favor of measures such as legalizing marijuana that she opposed as California's attorney general.