Journalists are crying foul over an Instagram post from John Hickenlooper's long-shot presidential campaign in which he champions marijuana reform, especially as it relates to sentencing and racial disparities in the criminal justice system.

The "vanishing post" fundraising appeal from the former two-term governor appeared as though he were taking credit for the state's legalization of marijuana in 2014 as well as some of the incremental changes that preceded the full-on legalization.

"While I was Governor, Colorado became the first state to legalize marijuana. And we worked to address the social and racial inequities that plague marijuana sentencing," one of the images from the post said.

"As President, I will make sure we do what we did in Colorado: Decriminalize marijuana, and put a system in place that allows non-violent, misdemeanor offenders to seal their records," a follow-up slide added. 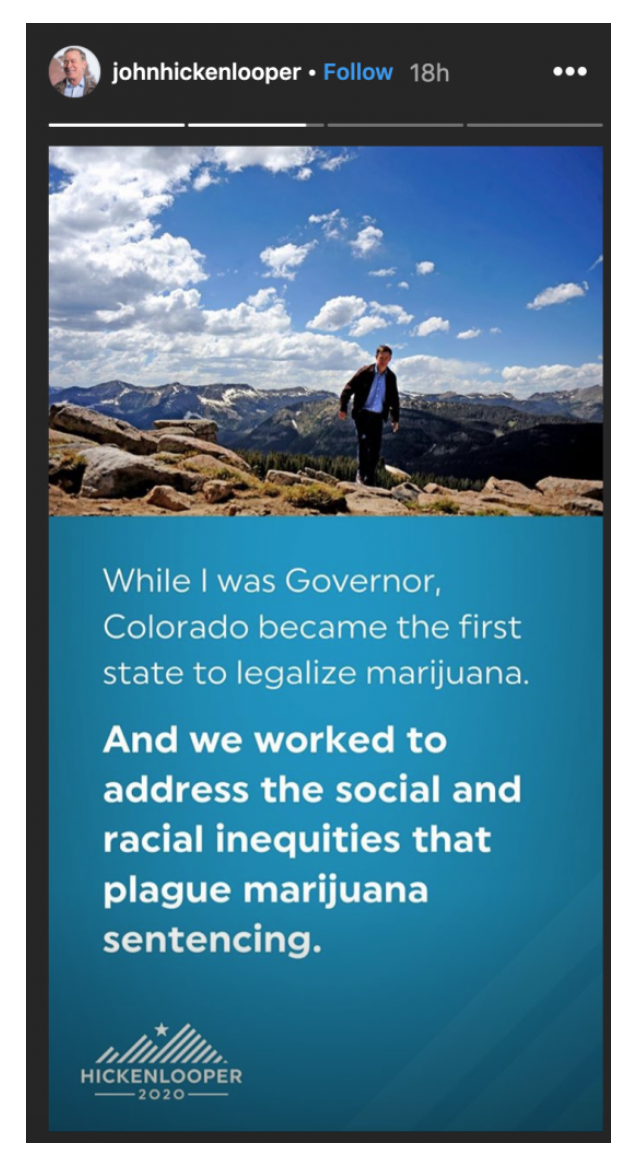 Hickenlooper was not only opposed to Amendment 64, the ballot initiative in which Colorado voters approved legal consumption and sales of marijuana, but was also opposed to an earlier initiative while mayor of Denver in 2005 that sought to decriminalize possession of small amounts of the drug but stopped short of other reforms such as creating government-sanctioned retail outlets.

He did sign a law in 2017 that allowed people with former marijuana misdemeanors to apply to have those criminal records sealed.

"This is fairly extraordinary," tweeted Daniel Nichanian, an editor for the nonprofit criminal justice publication the Appeal. "Hickenlooper is raising money off of the claim that ‘while I was Governor, Colorado became the first state to legalize marijuana’ even though he campaigned *against* the legalization initiative at the time."

"Please tell me more, @Hickenlooper. This seems like an egregious revision of history to claim you were at all progressive on social justice issues related to cannabis," tweeted Jake Browne, a former marijuana critic for the Denver Post.

"Zero programs championed in creating opportunities for minority business owners, expunging criminal records, and people of color were still arrested at a disproportionate rate under your administration," Browne added in a follow-up tweet.

Zero programs championed in creating opportunities for minority business owners, expunging criminal records, and people of color were still arrested at a disproportionate rate under your administration. pic.twitter.com/uW8q3Tn8t3

Others involved with public policy or advocacy joined in the criticism.

"I was Vice Chair of the @LPCO when we got Amendment 64 passed," tweeted Nicholas Sarwark, referring to the Libertarian Party of Colorado. "I'm glad Hickenlooper has evolved on the issue, but he was 100% against at the time, along with @coloradodems."

The criticisms over marijuana policy went almost unnoticed, however, in a weekend in which Hickenlooper gained more headlines for being booed at a California Democrat Convention after saying, "If we want to beat Donald Trump and achieve big progressive goals, socialism is not the answer."

That rebuke of socialism stands in contrast to his earlier refusal to call himself a capitalist just day into his formal candidacy for the presidential nomination.

Many Colorado political watchers have argued that such prevarications have been a hallmark of Hickenlooper’s governing style.

"His style as a governor was more 'whatever the legislature wants to do' and 'I'm working with everyone' and trying to appease both sides, and he's not going to be able to do that with the national media," said Lindsey Singer of Colorado Rising Action, a Republican advocacy group and opposition research firm.

A left-of-center news outlet in Colorado also challenged Hickenlooper earlier in the year for trying to revise his record on the death penalty.

The Colorado Independent said the former two-term governor "started flat-out making stuff up when he went on to suggest that, as governor, he encouraged a broad dialogue about capital punishment, its effectiveness and whether it's being meted out fairly."