Jeb vs. John vs. Chris

Feature: The battle for second place in New Hampshire heats up

Durham, New Hampshire—Children of America: John Kasich does not want you to take drugs. And he wants your parents and grandparents and aunts and uncles and siblings and the people down the street to remind you not to take them. When he’s president, he is going to remind you, too. Personally. Loudly.

Standing behind a ticking national debt clock, addressing a crowd of about 50 people in the basement of the Three Chimneys Inn, in Durham, New Hampshire, a charming bed and breakfast on a site built in 1649, Kasich told a red-headed boy sitting near the front with his siblings and their homeschooling mother not to give in to what, in my fourth-grade DARE class, we used to call "peer pressure."

"Never go near the drugs," he said. "The problem is sometimes we want to be with the ‘in crowd.’ One of these days you’ll be at a party and there are these pills. ‘Let’s just take one.’ That’s the beginning of the end. My staff doesn’t like me to talk about this because they say, ‘You sound like an old man.’ Tough."

Kasich spoke of the importance of neighborliness in winning the war on drugs. "I badger more people about this than you could imagine. But you want to solve the drug problem? You can solve it. If you’re at a restaurant and you see kids at a table, it doesn’t take much breath to say, ‘Hey, stay off the drugs.’" He mentioned an older woman from his childhood who would let his mother know when he misbehaved so that he could be beaten with a wooden spoon. "The wooden spoon wasn’t great. I hated that lady. But if she was alive today I would call her and thank her." 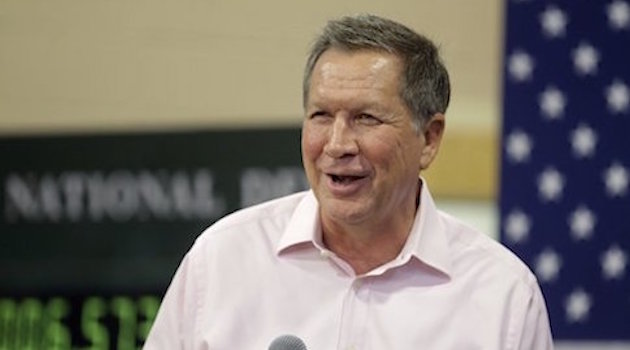 Kasich has some of the charm of an old-fashioned baby-kissing politician. The crowd at the Three Chimneys laughed when he picked up the iPhone of a girl sitting in the front row and joked about how his children don’t know what payphones are. He is less convincing on football. I wanted for the life of me to think that he was joking when he asked the same boy he lectured about the in crowd what name was on the back of the Packers jersey he was wearing. "Is that Brett Favre?"

Kasich is one of three moderate—a better word than "Establishment"—candidates competing with Ted Cruz and Marco Rubio in New Hampshire for what, if Donald Trump’s poll numbers hold up, will probably be a second-place victory. He, Chris Christie, and Jeb Bush have each aroused the ire of diehard classical liberals in the Tea Party: Kasich for using additional Medicaid funding authorized by the Affordable Care Act, Christie for accepting federal disaster relief after Hurricane Sandy and hugging President Obama, and Bush for something like his entire domestic policy platform. All three performed miserably in Iowa. Jeb’s sixth-place finish cost him $5,200 per vote.

Midwesterners and New Englanders have certain traits in common, above all reticence and politeness, and Kasich’s "aww, shucks" style was of a piece with the venue on Wednesday. But Christie, whom I saw speak at an old folks’ home in Bow, a town so small that it has only one restaurant, uses language better than Kasich, who should have known when to abandon his bizarre metaphor about being a presidential shepherd tending to congressional sheep who "squawk." Christie’s favorite conceit is memorable and funny. He is not a shepherd but an aging pick-up truck. 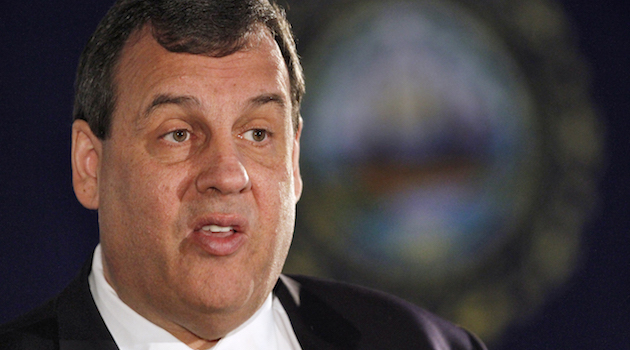 "Even on a rainy day like today you pass a car dealer and you see a new pick-up truck. It looks good. You sit in it and, boy, it smells good too, and so you go and you buy the new truck and it in front of your house. But let’s say it keeps raining and everything turns into mud. Your tires start swishing. You keep going you go back and forth the wheels spin and after a while you start to get frustrated and what’s the only thing that’s running through your mind? ‘Where the heck is my old truck? Man, my old truck always got me out of the mud. My old truck’s beat up a little bit. It’s scratched up a little bit. It doesn’t smell nearly as good as it used to. But I can't go anywhere.’ You think the mud’s bad today? Wait till September. There’s nobody who makes mud like the Clintons. That's what the Clintons do. They’ve lived in the mud their whole lives. And they know that they can’t survive if they don’t put you in the mud with them. Don’t worry about old Bernie, he ain’t going to win. Bill, he’ll be hosing down the stage, creating the mud."

The new 4x4s in this analogy were Ted Cruz and Marco Rubio, whom he derided for only having served in the Senate. "All they do is talk." That a background in talking seems to have worked out all right for Lincoln, JFK, and Harry Truman, whose vice presidency lasted only 82 days, is a fact Christie leaves unmentioned.

Five old ladies were more interested in my six-month-old daughter, whom my wife was holding in the lobby of the home during the event, than in what Christie was saying. But everyone else was tuned in. His tough talk on entitlement reform went over well in this crowd made up almost exclusively of Medicare and Social Security recipients. "Other candidates are afraid of you," he said, meaning persons over 65. "I trust you." He explained his plan for raising the retirement age and cutting benefits for the wealthy. "If you have assets over $5 million, congratulations, good for you. Is a $1,200 check really going to alter your lifestyle? No. But it will for the guy who worked hard and played by the rules but isn’t rich."

Drugs also came up. Christie refused to apologize to one man for taking a hard line against "medical" marijuana. At first he attempted to brush off the criticism implicit in a question about a girl whose family left New Jersey rather than administer her cannabis according to the state’s strict guidelines, suggesting that there was no arguing with marijuana partisans.

"Governor, I never said I was pro-pot."

"Thank you for insulting me, Governor." 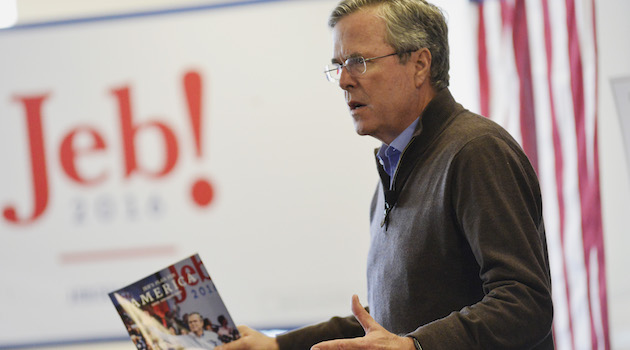 Jeb spoke in the banquet room of a resort in Laconia on Wednesday night. You know all the jokes by now. He is "low energy," hopelessly WASP-y, a self-described "joyful tortoise" who is incapable of talking himself up and whose impeccable manners make him reluctant to use even the mildest of four-letter words. He is a wonk so wonky that after listening to him discuss education reform—his pet issue—even the most earnest reform conservative will want to don a tricorn and fire up old Sarah Palin CPAC clips on YouTube.

All of this was in evidence on Wednesday. The event itself was impeccably produced, beginning and ending on schedule. Jeb’s young campaign volunteers, with their sweaters and chinos and nonchalant side-parts, looked like they belonged in an unproduced Whit Stillman screenplay. It was the only town hall I attended at which there was free food for attendees and press. Jeb used the word "disruptive" the way Elon Musk does. He talked about policy and "mechanisms" for understanding and the "architecture" of something I didn’t catch. When he proposed that we "launch a moonshot" to cure Alzheimer’s and suggested we need to "discover the brain," I could have sworn I was attending a TED talk. Most of his pronouncements about Catholicism in response to a question about the role of faith in public life sounded vaguely New Age, too. He said that prayer gives him "serenity." In the past he has suggested that it helps him to think clearly, too, which for a Catholic is like saying that Communion is a good morning snack.

When he told the audience about the importance of "stories I saw that put a context around" the issues—without bothering to go into detail about the stories themselves—all I could think of was his father’s infamous "Message: I care" gaffe from the ’92 campaign. "First you have to listen, then you have to learn." He complimented everyone on the incisiveness of their questions, in response to which he referred people to jeb2016.com and a large-format booklet outlining his policy proposals in even further depth.

None of this is to say that Jeb is not, in his way, an attractive candidate and, more important, a very kind and decent man. A single exchange from Wednesday illustrates this fact better than any Bloomberg poll or snappy debate performance ever could. After the last question I walked over to the front of the room where he was posing for selfies and autographing yard signs and copies of the policy book. A kid who had asked him earlier about his plan for addressing college debt came to follow up, and he and Jeb talked about the pitfalls of majoring in history. Then there was just Danny.

Danny was wearing a dark blue sweater with holes in it. He smelled terribly. When I got close to him I noticed that there was blood on his hands and that his fingernails were black. I do not think it would be letting my prejudices get the best of me if I were to venture a guess that he was severely mentally ill and a drug addict.

Danny disgusted me. I was afraid of him. As I stood there I found myself tensing up, getting ready for a tackle or a run, wondering whether he was going to Do Something Crazy—start screaming or pull out a gun.

Danny has a pet theory about climate change. He thinks an alien race living on the sun is building a subterranean civilization to supplant humankind. (I learned more about this theory when I talked to him outside the banquet room.) Jeb listened to Danny without flinching or backing away—or simply walking off with his security detail. After a while someone in a pinstriped jacket said something about an interview they had to get to, but Jeb showed no sign of having heard him.

"All life comes from the sun," Danny said.

"No one doubts that," Jeb said.

"So you’re open minded?" Danny asked, with a look of addled eagerness in his face that hurts me to think about.

Danny, who noted that he was originally from Colorado, started talking about books he had read that he could share with Jeb, who said that while he couldn’t commit to reading any books right now, he was happy to look at an article or two. "Send me the info," he said. Then he was off to his next event.