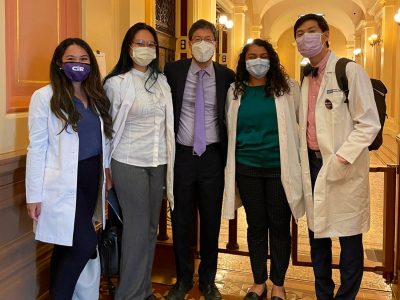 Tennessee Rep.-elect Mark Green (R.) told constituents at a town hall Tuesday that vaccines may cause autism and said he would challenge the Centers for Disease Control and Prevention once in office to get the "real data" on the subject.

"Let me say this about autism," Green said. "I have committed to people in my community, up in Montgomery County, to stand on the CDC’s desk and get the real data on vaccines. Because there is some concern that the rise in autism is the result of the preservatives that are in our vaccines."

"As a physician, I can make that argument and I can look at it academically and make the argument against the CDC, if they really want to engage me on it," he added. "But it appears that some of that data has been, honestly, maybe fraudulently managed, so we've got to go up there and stand against that."

Green told USA Today he was referring to what he called a possible cover-up by the CDC about a link between autism and childhood vaccines. He said he would currently encourage families to get vaccinated but said there "appears to be some evidence" of a link between increased autism diagnoses and vaccinations:

"It has been suggested on the floor of the House that the CDC may have not been transparent with data," Green said. "Parents should vaccinate their children, but more research definitely needs to be done."

Green said he "would encourage families to get vaccinated at this time," and confirmed that he and his wife had vaccinated their children.

"There appears to be some evidence that as vaccine numbers increase, rates of autism increase," Green said. "We need better research, and we need it fast. We also need complete transparency of any data. Vaccines are essential to good population health. But that does not mean we should not look closely at the correlation for any causation."

The theory that vaccines cause autism has been spread by such celebrities as Jenny McCarthy, and the CDC and the American Academy of Pediatrics have repeatedly concluded there is no proof of such a claim.

"Some people have had concerns that ASD [Autism Spectrum Disorder] might be linked to the vaccines children receive, but studies have shown that there is no link between receiving vaccines and developing ASD," the CDC wrote.

"Claims that vaccines are linked to autism, or are unsafe when administered according to the recommended schedule, have been disproven by a robust body of medical literature," it said. "Delaying vaccines only leaves a child at risk of disease. Vaccines keep communities healthy, and protect some of the most vulnerable in our society, including the elderly, and children who are too young to be vaccinated or have compromised immune systems."

Studies have shown outbreaks in recent years of measles and whooping cough, both of which can be vaccinated against, were tied to parents failing to vaccinate their children.

Green was nominated by President Donald Trump to be Army secretary last year, but he withdrew his name after an uproar over previous comments he made about the LGBT community and Muslims. According to The Tennessean, he also sponsored a bill that would allow mental health providers to refuse to treat LGBT patients.