Onward Together, the political action committee Hillary Clinton founded after her humiliating 2016 loss to Donald Trump, is raising money by selling "pantsuit onesies" for infants, the Washington Free Beacon has learned. 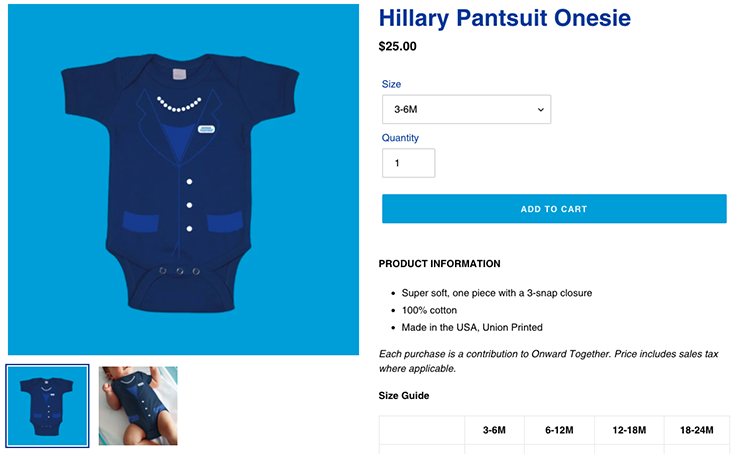 The Hillary Pantsuit Onesie is one of several ridiculous products for sale on the PAC's website but is the only one that exclusively targets #Resistance millennials with mental health problems. Others who wish to support Hillary's efforts to "resist bullying, hate, falsehoods, and divisiveness" can do so by purchasing items such as "The 🔥 Tweets Greeting Cards," which are also available as a sticker pack.

The "But Her Emails Enamel Pin" is another cute memento for individuals who, like Hillary herself, have never gotten over the fact that she lost in 2016 and would never even consider the possibility that she was an extremely unlikable candidate and is probably the only person on the planet capable of losing to Donald Trump. 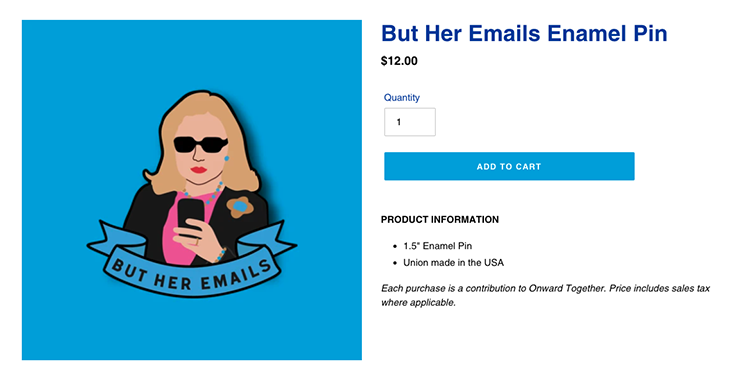 On Friday, the failed politician announced the addition of several new products to the Onward Together shop. While supplies last, prospective donors can purchase T-shirts and tote bags featuring a "vintage, but cute" image of Hillary in high school. The accompanying text—"Rodham" in all caps—could raise questions about her relationship with nominal husband Bill Clinton, the disgraced former president of the United States. Perhaps it's a signal that Hillary, who recently vowed to "never" leave the game of politics, is planning to reenter the arena.

Onward Together has raised about $965,000 since 2017. That's nearly equivalent to what it would have cost a Wall Street firm to hire Hillary Clinton to give five hourlong speeches before Donald Trump ended her political career.