You've probably heard the saying: Those who can, do. Those who can't, teach. In this day and age, those who really can't become Master Class instructors on how to fail.

Scholars beware: Hillary Clinton's new course on "the power of resilience" is not for the faint of heart. Completing the three-and-a-half hour Master Class requires an extraordinary amount of preexisting intellectual resilience. Your humble reviewer, for example, was forced to confront his own lack of resilience when his failure to overcome the soul-destroying tedium of Hillary's lectures caused him to miss his original deadline. (Disclaimer: Unless you're getting paid to review it, do not attempt.)

Maybe the producers were trying to make some kind of meta artistic statement, because sitting through an extended PowerPoint presentation from one of the least charismatic public figures in American history will inevitably make you more confident in your ability to overcome life's challenges, which will seem so facile by comparison. Plus, thanks to Hillary's imparted wisdom, you'll already know the answer to questions like, "Should you get back up after getting knocked down?" and "Should you have a mission statement for your life?" 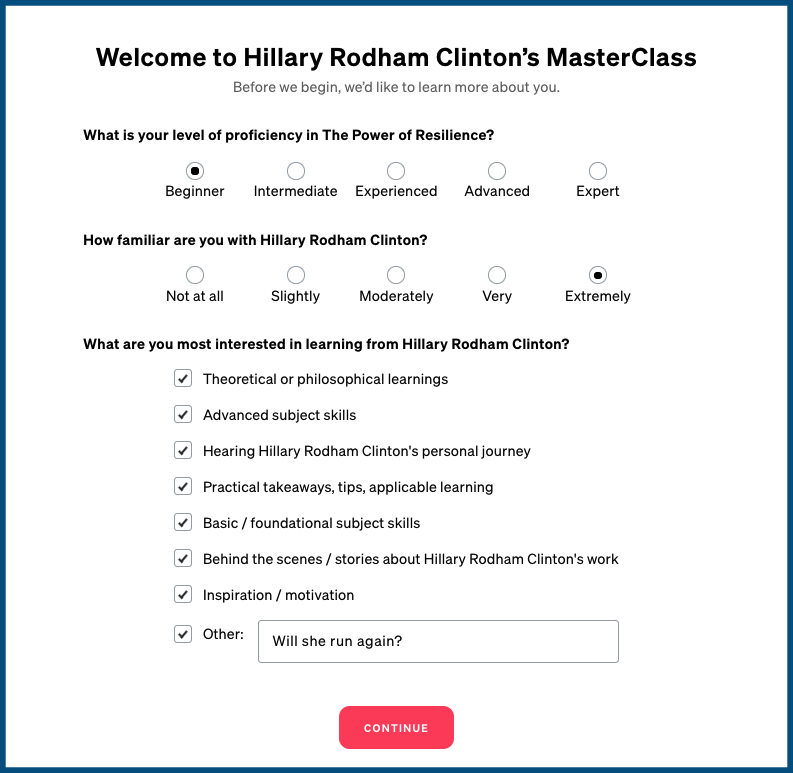 You almost have to feel sorry for Hillary Clinton. Not really, but for the sake of argument. As recently as 2016, she was a multimillionaire feminist icon on the verge of making history. Now she's just an irrelevant failure and "toxic white liberal" who is despised or ignored by everyone outside the Acela corridor cocktail circuit. Her days of charging $225,500 to give a speech at the Institute of Scrap Recycling Industries are long gone, yet she is either unable or unwilling to bow out gracefully. The Master Class gig seems like another step in Hillary's inevitable evolution from failed politician to moderately successful self-help guru to extremely successful multilevel marketing executive to federal inmate.

Part of what makes Hillary Clinton so resilient, according to the Master Class instructor, is her values. She urges her students to "think about things that are fundamentally important to you," to "write it all down" and continuously revise it. For example, Hillary cares deeply about "so many different issues and concerns" that she simply "can't be involved in everything," so it's often necessary to "choose what it is you're going to stake as important to you and where you're going to put your energy."

What, exactly, does Hillary Clinton care about? Well, since her humiliating loss to Donald Trump in 2016, she has chosen to put most of her energy into talking about herself. She wrote a memoir about why she lost (James Comey, Vladimir Putin, and sexism), took part in a Hulu documentary about her life, and coauthored a thriller based on her time as secretary of state, in which the protagonist uncovers a "vast right-wing conspiracy" plotting to set off nuclear bombs across the country because they "hate America's diversity." 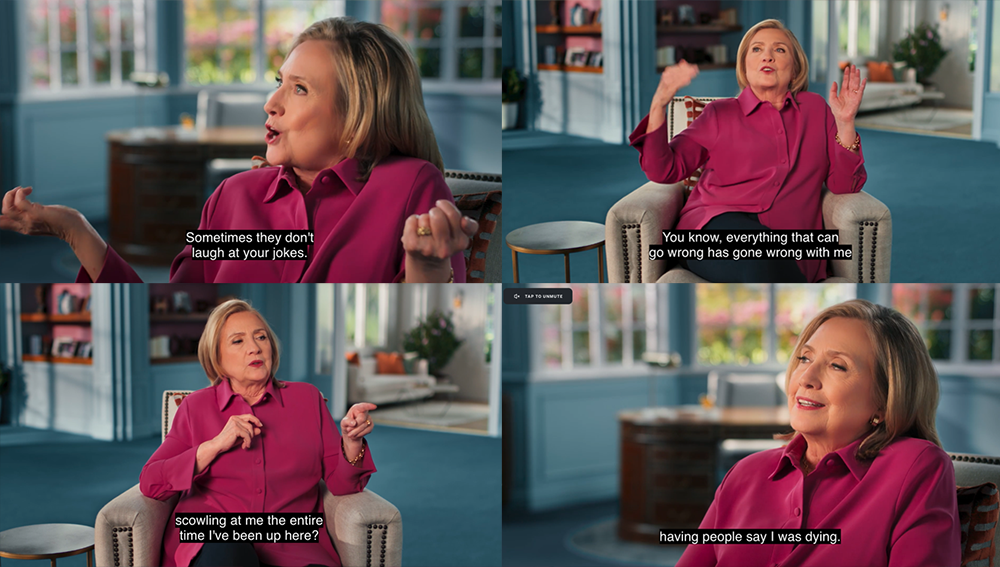 The Master Class is yet another chapter in her endless quest to explain why people's opinions about her are wrong, and highlight the unique resilience of Hillary Clinton in the face of numerous obstacles, unfair challenges, and American voters who don't know what's best for them. "My entire life has been captured in job titles and sound bites and a seemingly endless parade of people with lots of opinions about what I should or shouldn't do, but not very much context," Hillary explains in the opening lesson, sounding more bitter than resilient.

Most of the Master Class material, broken down into lessons such as "Discovering Your Mission," "Taking Criticism Seriously, Not Personally," and "Overcoming Setbacks," could be more efficiently imbibed by walking into a high school guidance counselor's office and perusing the posters on the walls. You might think, for example, that a former secretary of state would have something interesting to say about "The Fundamentals of Negotiation," but you'd be wrong. "Aim for a win-win," she advises before explaining how she negotiated $20 billion in funding for New York after the 9/11 attacks. (Answer: She asked President George W. Bush for $20 billion, and he agreed.)

Sitting comfortably in one of her mansions, propped up on pillows, Hillary exudes a strong Stuart Smalley vibe as she implores the young people she imagines to be watching that they are good enough and people like them. "You are the only you there will ever be," she says. "Be the best you you can possibly be and be true to who you are." No one born after 1960 is watching this crap, obviously, so maybe she's just talking to herself. Maybe she's not as resilient as she thinks. How else would you explain the fake Oval Office setting, or the fake award for "First Female Nominee for President of the United States," or thinking it was a good idea to read the "victory speech" she thought she'd give on Election Night in 2016?

You don't have to feel sorry for Hillary Clinton, but there's nothing wrong with hoping she gets the help and support she needs. 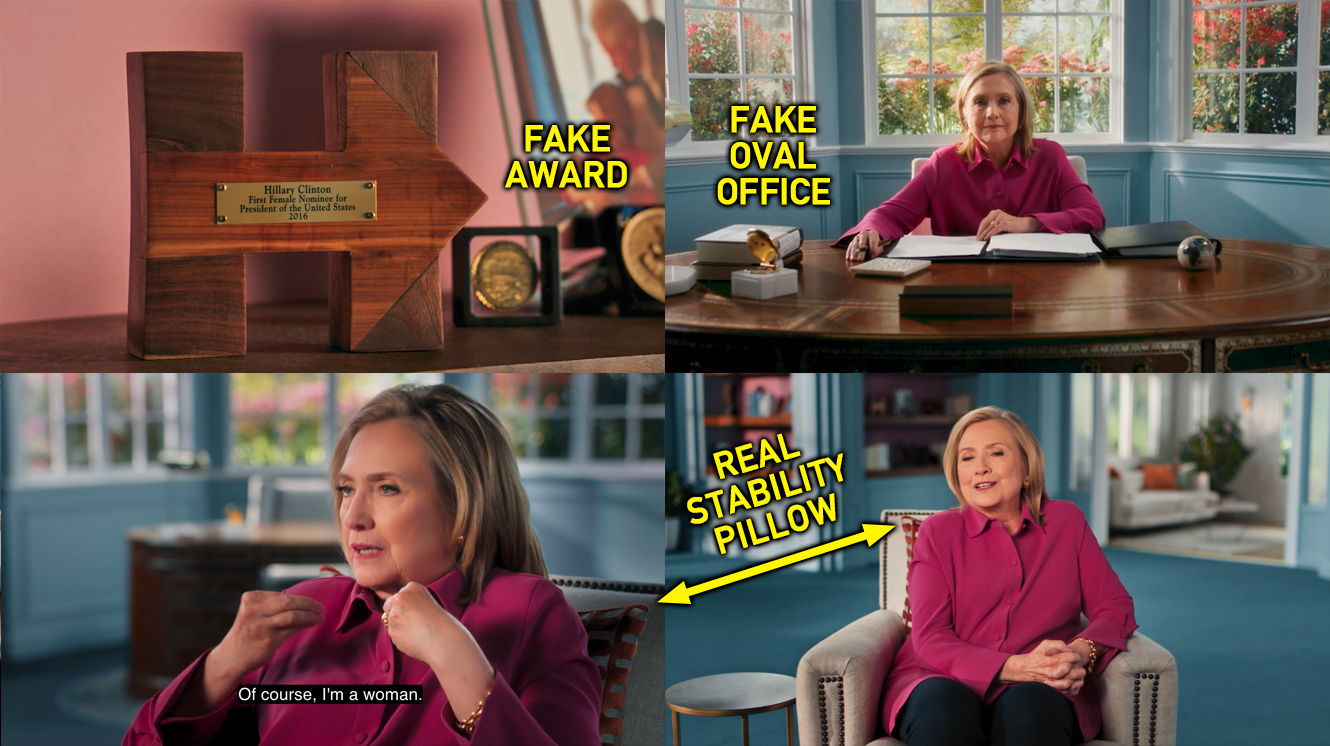