High Times at the Nation

One of the Nation magazine’s newest hires, Lee Fang, is a far-left Democratic operative with a history of publishing error-riddled and misleading reports.

As Fang (pronounced like bong) begins his stint at the historic left-wing publication, questions still surround a series of half-baked reports that were filed during his time as a writer for the Center For American Progress Action Fund’s Think Progress blog, and for the Republic Report. Both organizations advocate for greater transparency in politics, even as neither fully discloses its donors.

Historian and author Ronald Radosh noted that the Nation, which is one of America's oldest publications, has often been plagued by scandal.

"The Nation’s whole history is one big scandal—support for the Soviet Union for decades," Radosh said. "And of course, support for Cuba, [Hugo] Chavez and Venezuela, the Sandinistas, etc."

The Nation also received criticism for hiring the late Alexander Cockburn, a journalist and author who was reprimanded by Jewish leaders for his anti-Semitism, Radosh noted.

In its obituary for Cockburn, the New York Times noted he once wrote a column "drastically revising downward the number of deaths attributable to Stalin."

Fang, a 2009 graduate of the University of Maryland’s Government and Politics program, first got hooked on politics as president of UMD’s College Democrats chapter (see photo above). 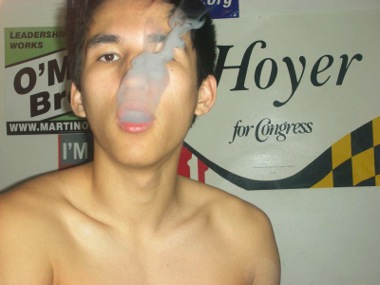 As an investigative blogger for CAPAF’s Think Progress blog, Fang took a hit for secretly coordinating his coverage with Democrat-aligned special interest groups. Fang continued his questionable reporting methods after joining the Republic Report alongside convicted felon Jack Abramoff soon after his release from prison.

Fang has written extensively about conservative billionaire businessmen Charles and David Koch, portraying them as nefarious GOP puppet masters—a charge that even "some liberals reject as an overly simplistic caricature," according to Politico.

While investigating the Koch brothers on Think Progress’ behalf, "Fang attended a meeting with representatives from [the Democrat-aligned] Common Cause, Greenpeace, Public Citizen and the Service Employees International Union at SEIU headquarters to figure out how to make the most of the sudden focus on the Kochs," according to an April 2011 Politico report.

"Meeting participants have continued to trade research about the Kochs and strategize via a Koch-related email listserv and a rolling series of conference calls," Politico reported.

Asked about CAPAF’s refusal to distribute the names of those who fund it, Fang explained the difference on a conference call organized by Common Cause:

"It’s fundamentally different when you have wealthy individuals that want to donate to a worthy cause, and the Koch brothers and some of their cohorts that are funding groups that are essentially just advancing their self interests and their lobbying interests," Fang said.

Fang later narced on Politico "for not writing that his side of political debates is morally right."

In April 2011, Fang accused the Koch brothers of "manipulating the oil market," though his claims were later debunked. The article remains uncorrected.

Several months later, another Fang report was exposed as false.

Fang had claimed that a former Goldman Sachs employee who worked for Rep. Darrell Issa (R., Calif.) on the House Oversight Committee had changed his name to hide his past at the financial giant.

The staffer later told Talking Points Memo that "he and his sister switched their names a few years back to respect the last wish of his grandfather to carry on his mother’s family name."

Think Progress was forced to "update" Fang’s story five times in a series of attempts to explain why it was standing by the erroneous report.

Greenwald dissected Fang’s arguments point-by-point to show how they were false and misleading.

Fang left CAPAF in late 2011. At that time, the organization was engulfed in a scandal over its writers’ promotion of anti-Semitic conspiracy theories. (Fang was not involved.) The scandal forced several writers to resign from the blog.

Soon after, Fang joined the Republic Report, an online news site published by the non-profit United Republic, a campaign finance reform special-interest group that seeks to get "big money" out of politics.

The group initially refused to reveal its donors, but capitulated to mounting pressure earlier this month when it released the names of its top five contributors.

Fang finally joined the Nation last week, where he will get in the weeds of "money in politics, conservative movements and lobbying."