The movement that launched soon after President Donald Trump's election—culminating in a huge protest in Washington and around the country the day after his inauguration—has begun to crumble beneath Linda Sarsour, Tamika Mallory, Bob Bland and Carmen Perez, Tablet reported Monday. Gillibrand gushed about the quartet for Time magazine‘s list of the world's most influential people in 2017, but the left-wing organization is now beset by its relationship with radical anti-Semite Louis Farrakhan and accusations of anti-Semitism at the top of its ranks.

"The Women’s March was the most inspiring and transformational moment I’ve ever witnessed in politics. It was a joyful day of clarity and a lightning bolt of awakening for so many women and men who demanded to be heard," Gillibrand wrote. "And it happened because four extraordinary women—Tamika Mallory, Bob Bland, Carmen Perez and Linda Sarsour—had the courage to take on something big, important and urgent, and never gave up. Because of their hard work, millions of people got off the sidelines, raised their voices and marched."

"This is the rebirth of the women’s movement. These women are the suffragists of our time," she added.

But Tablet reported that, "according to many involved in the January 2017 marches," including co-founder Vanessa Wruble, Gillibrand's over-the-top praise undermined the local leaders of marches around the country who did the real work:

But in fact, according to many involved in the January 2017 marches, Gillibrand’s description wasn’t just over the top; it undermined and erased the very people actually doing the work to create female-centric voting blocs throughout the country. "To be fair, the Women’s March on Washington—the one I was involved with at the time—had no real connection to the many marches that took place across the country and globally that month," said Wruble, in an interview with Tablet. "Local leaders, often first-time organizers, spearheaded marches in their own communities. Many used the branding we put out as open source and helped to make the marches look unified—which was certainly advantageous in creating the sense of a singular, massive movement—but they were the ones who did the real work."

Gillibrand's office didn't reply to a request for comment on that or on reports by Tablet of the group's leaders being accused of anti-Semitism.

The in-depth report stated Perez and Mallory shared anti-Semitic canards at the organization's first meeting shortly after Trump's victory, suggesting Jews had a special responsibility for exploitation of black and brown people and historically led the slave trade. Mallory, who has come under fire for her friendship with Farrakhan, denied making the comments.

Another Women's March co-founder later said Perez and Mallory berated Wruble over being Jewish in a "debriefing" after the march in January 2017:

I suddenly realized that Tamika and Carmen were facing Vanessa [Wruble, a co-founder], who was sitting on a couch, and berating her—but it wasn’t about her being white. It was about her being Jewish. ‘Your people this, your people that.’ I was raised in the South and the language that was used is language that I’m very used to hearing in rural South Carolina. Just instead of against black people, against Jewish people. They even said to her ‘your people hold all the wealth.’ You could hear a pin drop. It was awful.

Sarsour was alternatively apologetic and defiant about the organization's connections to Farrakhan last month, saying his hateful rhetoric didn't align with the Women's March's values and apologizing for not being clearer about its fight against anti-Semitism. However, she also complained as a Muslim that being forced to account for Farrakhan's language was a feature of white supremacy. 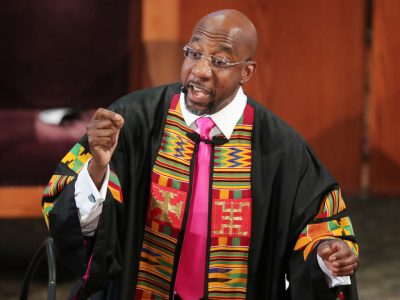