When the definitive account of America's decline and fall is ultimately written, there will presumably be a whole chapter dedicated to Fyre Festival, the epically failed criminal conspiracy / luxury music festival for trust fund thinkfluencers that is currently the subject of two popular documentaries, one on Hulu and Netflix.

Billy McFarland, the 27-year-old wunderkind entrepreneur who conceived of Fyre Festival, is currently serving a six year sentence in federal prison for wire fraud. Federal prosecutors described McFarland's actions as "a disturbing pattern of deception, which resulted in investors and customers losing over $26 million in two separate fraud schemes."

McFarland, the son of wealthy New Jersey real estate developers, and a graduate of the elite Pingry School, was able to carry out his criminal schemes thanks to the support of the same rich freaks who prop up our decadent political establishment.

As many have noticed, the Netflix "Fyre" documentary features a cameo by Angelo Rofaroe, press secretary for Senator Minority Leader Chuck Schumer (D., N.Y.). Rofaroe, described as a "very connected" "PR guy," is seen hanging out in McFarland's penthouse suite in Manhattan toward the end of the documentary, at which point McFarland is actively promoting another scam enterprise after being charged with fraud (and released on $300,000 bail) for his role in Fyre Festival. Rofaroe has since said he and McFarland were "friends" who met at a "networking event."

Schumer is a maven of the Acela corridor swamp. He rakes in millions of dollars from wealthy liberal donors and industries that are unlikely to be so supportive of a Bernie Sanders presidency, or of Alexandria Ocasio-Cortez's recent proposal to install a top tax rate of 70 percent. 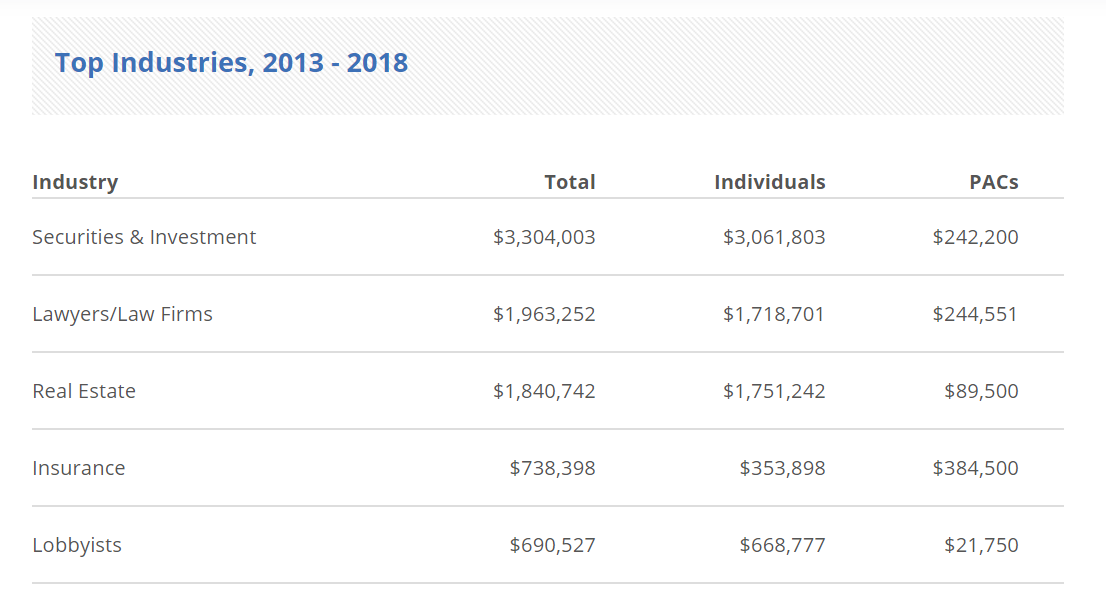 One of the those wealthy donors is Bob Jain, the co-chief investment officer at Millennium Management, a hedge fund that oversees nearly $40 billion in assets. Jain, who has donated tens of thousands of dollars to Democratic candidates over the years, also sits on the Harvard endowment board and the New York Federal Reserve's investor advisory committee. His wife, Carola Jain, is featured in the Netflix documentary as one of McFarland's primary financial backers, right up until the bitter end.

The Jains are a staple of the Hamptons elite social scene, a place where Democratic politicians who enjoy obscene wealth, such as Hillary Clinton, go to raise money for their campaigns. The Jains are the sort of people who throw "Grand Prix Monaco" themed cocktail parties at their $15 million mansion, where guests can be "charmed by star caterer Peter Callahan's hors d'oeurves, taking ‘bite sized' to a whole new level with exquisitely miniaturized morsels that boggled the mind and pleasure[d] the palette."

The Jains have also hosted benefits for the Watermill Center, a Hamptons-based nonprofit that promotes "artists who embrace avant-garde, multidisciplinary approaches." Democratic megadonor Stephen Susman is a board member.

The Watermill Center's 2015 benefit, hosted by the Jains, featured, among other things, "nude models [lying] on a lawn covered by blankets with whimsical prints," and a "9-foot creature covered in silk-wrapped pink balls." Former AOL executive Tatian Platt documented the festivities on Instagram.

Normal Americans might be tempted to mock the weird, opulent lifestyle of our Hamptons-dwelling overlords. But it's actually one of the few locales in the country that remains untouched by the bitter politics of division, a place where Chuck Schumer and George Soros and Steven Spielberg can swill cocktails and mingle with the likes of Ivanka Trump, Kellyanne Conway, and David Koch at a party hosted by Washington Post heiress Lally Weymouth.

Ivanka's husband, Jared Kushner, was also in attendance at the 2017 Hamptons gathering. Kushner previously dated Laura Englander, the daughter of Bob Jain's boss, reclusive hedge fund billionaire Israel Englander, who has also donated thousands to Schumer and other Democratic candidates throughout the years.

It's a small world. It's a big swamp.