The Fire Sermon of Jill Stein

Feature: What I saw at a Green Party rally

Then The Blessed One, having dwelt in Uruvelâ as long as he wished, proceeded on his wanderings in the direction of Gayâ Head, accompanied by a great congregation of priests, a thousand in number, who had all of them aforetime been monks with matted hair. And there in Gayâ, on Gayâ Head, The Blessed One dwelt, together with the thousand priests. And there The Blessed One addressed the priests. … [W]hile this exposition was being delivered, the minds of the thousand priests became free from attachment and delivered from the depravities.

FREDERICKSBURG, Va.—I don't know if it's just the neat patriotic lights or the hypnotically relaxing yellow floral pattern on the carpet or the kindness and decency of everyone here in the audience with me, but this cover band trio sounds pretty good. They are doing "To Love Somebody," that immortal baroque pop classic from the first Bee Gees album in an all-acoustic arrangement. When I try to figure out what the band's name is, someone tells me that it's "Ask Fred" and that they usually play R&B. It's easy to imagine the front-woman easing her way into "The Dark End of the Street" and the bearded guy behind her laying down a mellow groove on a vintage Hammond organ. 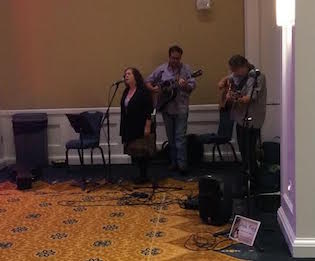 The best thing about attending a Jill Stein for President rally—other than the soulful jams—is that there is virtually no security or, indeed, hang-ups of any sort. When I arrive at the University of Mary Washington, menacing black Tahoes or Escalades are not lined up with grilles leering at you like hungry sharks. Walking to the hall in the basement of the University Center does not involve winding my way through Rent-a-Gates. No one searches me at the door. There is no sign-in for media or for anyone else. At a booth near the back you can pick up t-shirts, buttons, stickers, yard signs, and other swag. People of all ages and races are here. Bearded old dudes who look like they never sold their copies of Bee Gees' 1st are mingling with toddlers who laugh and run and color. Mustached fathers in jackets and ties sit with their daughters on their laps next to students in beanies and baseball caps. One college-aged couple shares a tender embrace. The only cop I see all night stands in the back of the room smiling in his Stratton hat. This is the most hassle free political event I have attended since I saw John Kasich in the basement of the bed and breakfast I was staying in during the primary. Everyone is happy to be here.

This includes our M.C., who is so relaxed that he forgets to introduce himself until after the second speaker, a local Green Party candidate named Kimberly Lowe, has finished telling us how nice the area right-wingers whose homes she has visited are. ("They've bought me hot dogs!" she explains.) It turns out the M.C. is B. Sidney Smith, a self-described "writer, business owner, gentleman farmer" who runs a math website, among other ventures. He asks us why Goldman Sachs—which he pronounces "Goldman Socks"—and CIBC and Xerox and the National Association of Realtors paid Hillary Clinton millions of dollars for speeches.

"For what? For the entertainment value? For her sparkling personality and the pleasure of her company?"

Stein is even more genial than her usher. There is an extraordinary contrast between her placidly benevolent tone and the Fire Sermon she delivers against greed and exploitation and sneering centrism ("I don't know if you saw John Oliver try and lynch us") and nukes and sloppy polling and student debt. She is the only one of the four major presidential candidates whose rhetoric is grounded in a conception, however fragmentary and ill conceived, of justice and the common good. 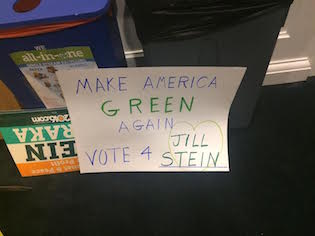 The appeal of Clinton, Trump, and Gary Johnson is, in my opinion, the siren call of liberal self-aggrandizement, with gently meaningless personal differences. In Hillary's case, it is all about assuring the meritocracy that its gains are not ill gotten. For Trump, it's machismo and nursing your resentment like a cold drink. For the former governor of New Mexico, it's a future that gleams with hot-air balloons and the unlimited right to consume weed brownies before or after watching hardcore pornography. Meanwhile Stein draws our attention to solidarity and our duties toward the marginalized.

"A world that puts people, planet, and peace over profit" is a world that we should all want to live in. I am not sure that it is a world that Stein would move us toward, however. For every social evil that she would extricate—wage theft, usury, spoliation of the environment, the reduction of the individual to Homo economicus—there is another that she would accommodate or even advance. Under Steincare, it goes without saying that organic cage-free infanticide would be fully covered, along with craft and wiccan surrogacy, tantric euthanasia, and eco-friendly porno therapy. When she insists on the sovereignty of Native Americans on tribal lands, you wonder how far this would go if, say, the Cherokee Nation continues to refuse recognition to same-sex marriages. She and her surrogates are also hilariously naïve about Julian Assange and Edward Snowden—Smith unabashedly refers to them as "heroes"—and about foreign policy in general.

This is why, however fun it is to cheer her on when she upbraids the DNC and however good natured and tolerant her supporters seem to be, it is impossible ultimately to utter "Jill Not Hill" as anything other than a tease.

On Iran, Biden Should Take ‘No’ for an Answer