Miller released an ad on Tuesday in which she touted her policy platform and President Donald Trump's endorsement. She also attacked Ojeda, saying that he "sold out" to House Minority Leader Nancy Pelosi (D., Calif.), received large sums of money from far-left sources, and will back a Democratic plan to impeach Trump.

In response to the ad, Ojeda wrote in a now-deleted tweet: "That's a really nice cartoon … but it is good to know that on the anniversary of 9/11 … you were thinking about political attacks. Way to be a patriot." 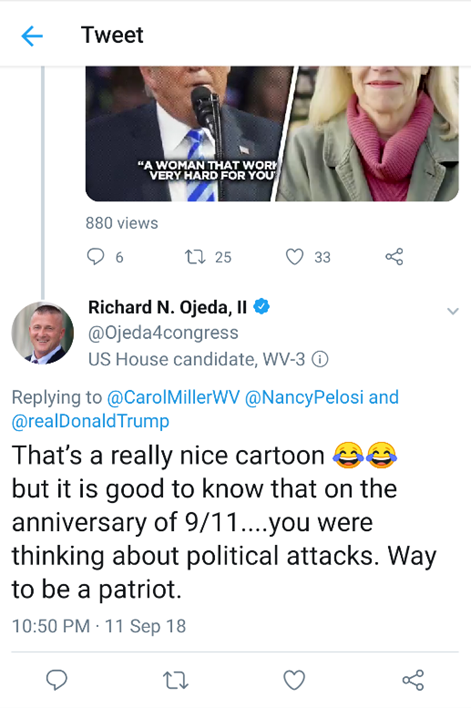 Ojeda, a member of the West Virginia Senate, did not mention that he launched an ad one day earlier touting his service in the military that aired at least 11 times on Tuesday. In fact, Ojeda spent more than $120,000 on the ad buy from Tuesday through next Monday, according to a competitive sheet on West Virginia markets provided by a Republican source.

Ojeda's tweet on Tuesday was not the first time that he has stirred controversy.

Back in April, Ojeda told an audience that "the United States of America is not the greatest country in the world." He repeated the claim in a conversation with left-wing filmmaker Michael Moore, saying, "I'm sick and tired of people telling me that America's the greatest country. Because we can whip your ass?"

Moore ends the trailer calling Trump the "last president of the United States."

Ojeda is running as a Democrat in West Virginia despite voting for Trump in 2016. He told Mother Jones that he supported Trump out of "regional solidarity," but has also said that he is not opposed to speaking out against officials with whom he disagrees.

Miller currently leads Ojeda in the polls, according to RealClearPolitics.