The Day I Joined the Swamp Revolt

Feature: Getting to know the anti-Trump left

Takoma Park, Md., Jan. 20—The congregation of about 80 huddled together in the room, awaiting the descent of the spirit. The messiah they had followed for years during his public ministry—the man whose rebuke could lower the seas—had departed. Many struggled to hide bitter disappointment. He had not been the leader they had hoped for, had not turned his mass of followers into a lasting force. Instead he left them vulnerable in a world that despised them, in which the vulgar temporal authorities mocked and persecuted them. Had they deluded themselves? Did not their hearts burn within them while he spoke to them on the road to Washington? That seemed so long ago.

This was the embattled, Early Church mentality on display at Takoma Park Presbyterian Church on Friday afternoon. Barack Obama had ascended into the post-presidency in a Marine helicopter just hours before. Donald Trump had become president. The people assembled in the church gymnasium had come to commiserate and share tales from Trump's America. But they had also come to learn, so they could go forth and make disciples.

As we met, similar gatherings were being held at more than 20 sites in the District of Columbia, Maryland, and Virginia. Most were held at progressive, mainline churches like Takoma Park P.C. (led by the Rev. Jocelyn Cadwallader), which advertises its political agenda with a large "BLACK LIVES MATTER" banner hung over the main entrance. The organizer of the gatherings was a group called Swamp Revolt, founded the day after the election to oppose Donald Trump.

"The ‘swamp' [has been] derisive shorthand for the place and people who work and live in the District of Columbia," Swamp Revolt's website states. "It was and is a mean-spirited attempt to demean the work, values, and lives of federal workers, community organizations, and civil servants of every stripe."

"Welcome to Swamp Revolt. Come on in, the water is fine."

The three-hour meeting was devoted to "bystander intervention training," meant to teach activists how to intervene in situations involving attacks or harassment. Such situations, it was implied, were right around the corner in Trump's America. The organizers asked the crowd to share instances of harassment they knew about, prompting an outpouring of mostly second- and third-hand accounts. One black woman's daughter had been called the N-word at a Georgetown restaurant; the church's signs had been defaced, one woman said; two transgender individuals had been assaulted in nearby Wheaton, another added—a reference to this event, not connected to Trump supporters in any way; a Muslim woman had been threatened for wearing a hijab, said one Baby Boomer who pronounced it "hajeeb." I wondered which hijab incident she was referring to. The anecdotes—an admixture of truth, hearsay, and hoax—piled up. This surge of post-election hate, the organizers said, demonstrated the need for training sessions like ours. Over the next several hours, we would learn how to inject ourselves into bad situations, protect victims, and bring perps to justice.

Lesson one: How to document an unfolding act of hate. "Does everyone have a smart phone?" asked one of the organizers, a man with a Santa Claus beard and Huxtable sweater. "If you can, open the video function." I hit my phone's home button and swiped right once to access the camera. The crowd of mostly white Boomers pecked timidly at their screens for agonizing seconds.

"Was everyone able to find it?" the organizer asked.

"I would have to find my glasses," shared one oldster.

"Maybe we could just pretend like we were filming," said another, to thoughtful nods from the audience.

After dispensing with the preliminaries, we moved on to roleplaying scenarios, with attendees acting the parts of bystander, victim, and jackbooted, red-hatted aggressor. Before we began, the organizers issued an ominous warning: "We try to make the role playing as realistic as possible, and it can be triggering," they said. 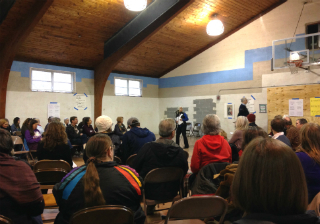 My group was composed of eight women aged approximately 25 to 55, and myself—a male on assignment from the conservative-media-industrial complex, not that they needed to know that. I was looking forward to the skits very much, although in truth I do not have much stage experience. The extent of that experience consists of one amateur production at Mockingbird Elementary School, where I played the part of a friendly Scarecrow. I was not entirely convincing in the role, however, because I forgot to wear the broomstick that was to hold up my arms at ninety-degree angles. Today was an opportunity for redemption.

The organizers demonstrated a scenario for us before we proceeded. Huxtable Sweater, selected for the role of AGGRESSOR, berated a woman holding a sign for the Women's March on Washington. "Get out of here," he said, flailing his arms in her face. "That's un-American—whatever that means." This waggish line drew laughter from an audience that no doubt had spent the last few months calling President Trump a Manchurian Candidate.

Enter heroic BYSTANDER, stage left. "Do you need some help?" The VICTIM nodded a timid assent, and together BYSTANDER and VICTIM walked away from a thwarted and powerless AGGRESSOR. Scene.

Subsequent scenarios were variations on this theme. I admit that I felt my acting ability was thwarted by the lack of complexity in the script. There was no room for growth in any of the characters. Each of the sketches followed a predictable course, ending in a matter of seconds after BYSTANDER intervened to spirit away VICTIM. Improbably, the AGGRESSOR never followed, but faded into meek and befuddled silence, vanquished by the power of kindness.

Weakly developed antagonists were a serious flaw in the productions, partially due to a fascinating quirk of group dynamics: It quickly became apparent that none of the actors wanted their peers to think they were capable of being a convincing antagonist. After a spineless turn as AGGRESSOR, they would confide in their neighbors that the role was so hard because they just weren't that kind of person—couldn't even pretend to be that way, so far was it from their experience. This was enough of a problem that I delivered a pep talk to a few of my group members, reminding them that the beauty of the stage was the ability to enter characters unlike themselves. "I am determined to prove a villain / And hate the idle pleasures of these days."

Not that my turn as VILLAIN was much better. I was cast as RACIST MALE in pickup truck, hurling abuse and objects at MINORITY PEDESTRIAN. "Hey you," said I, pulling up alongside my prey. "What are you doing in this neighborhood, huh? Your kind don't belong here." I like to think my volume and menacing tone were somewhat more convincing than those of the ladies who preceded me in the role, but I, too, faded away lamely once BYSTANDER arrived on her white—I'm sorry, tastefully multicultural—steed.

After each scenario, the groups convened to share what the performers had learned. Much of the advice was eminently practical—or, more accurately, baby-level common sense. If RACIST MALE is chucking objects at MINORITY PEDESTRIAN from a pickup truck, collect MINORITY PEDESTRIAN and move him away from the line of fire. If ETHNONATIONALIST MALE is yelling at SPANISH-SPEAKING SHOPPER in a store, enlist the shopkeeper to eject ETHNONATIONALIST MALE from the premises.

Other bits of advice seemed divorced from reality altogether. We were advised not to immediately involve law enforcement in an unfolding incident if we suspected the victim could be an illegal immigrant. In another instance, a group found that "turning [their] back on the attacker was very effective"—a finding that would come as a surprise to Wild Bill Hickok. Other bits of advice were daft. What should we say, for example, to a victim when we approach him or her? "Say, ‘It would be a privilege to support you,'" said one dreamy-eyed woman enveloped in a blanket scarf.

As the training session wound to a close, another woman looked up from her smartphone to deliver a warning. "Be safe," she said. "There are already riots breaking out across the city." Across the room, heads nodded grimly. It was happening. I looked around in the few beats of silence that followed. Was no one going to say it? As if on cue, an event organizer with a heavy conscience chimed in. "Err, yes," he said (I'm paraphrasing). "Those seem to have been started by protesters who haven't committed themselves to the principles of nonviolence."

Anti-Trump protesters, in other words.