Those who prefer their scandals delivered in comic book form can now learn about the shady deals between Clinton Foundation donors and Hillary Clinton’s State Department in the new graphic novel Clinton Cash.

Hoping to expand to a new audience, Peter Schweizer’s best-selling book was turned into a comic filled with colorful pages of Bill Clinton cashing checks from foreign governments for speaking fees and taking meetings on Frank Guistra’s private jet.

The comic book, published by Regnery, debuted at number one on the New York Times bestseller list for graphic novels last week. 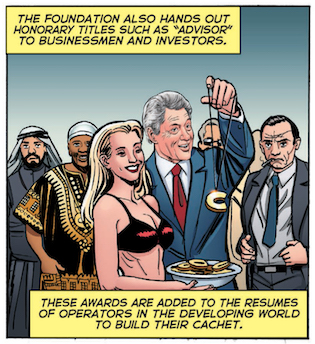 Dixon said the comic book presents an opportunity for an entire new audience to learn about the dozens of favorable deals between the State Department and Clinton Foundation donors during Hillary Clinton’s tenure detailed in Schweizer’s book.

"A lot of people weren’t going to read the book because it’s dense," Dixon told the Washington Free Beacon. "It’s dense, it’s non-fiction, it’s really well-written, it clearly makes out the case and everything else, but a lot of people aren’t even going to pick it up. And the movie, a lot of times these movies made by conservative outfits—and I’m a conservative myself—they preach to the choir. Nobody is going to walk into one of these movies and have their mind changed."

"But a comic book, because it is what a comic book is, what a graphic novel is, it’s colorful and interesting, there’s an immediate experience looking at every page," he said. "It will attract people who maybe haven’t made their minds up or weren’t informed about this, and are curious." 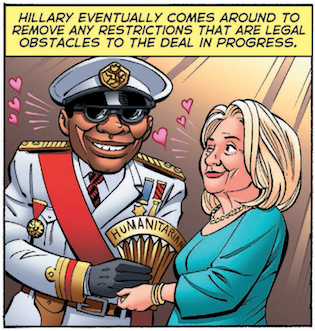 Smith, an artist who has worked on numerous comic books including The Avenger, Batman, Superman, and Hulk, recruited Dixon to write the Clinton Cash graphic novel.

Dixon said there are not many conservative writers in comic books, and "certainly not many who are willing to step into the light."

The graphic novel is being sold at Barnes and Noble, and Amazon, and will eventually be available in comic book stores.

Dixon said the book could even appeal to supporters of Bernie Sanders. At the Democratic National Convention, Sanders supporters speaking at protest events urged others to see the film version of Clinton Cash.

"There’s a lot here for frustrated Bernie supporters to basically validate their frustrations a little further," Dixon said. "The Clintons really, it’s just shocking. Right in broad daylight they are pulling this stuff off."