A leader for the group Indivisible, which has partnered with a number of liberal groups around the United States for town hall events since last year, slammed the Democratic Congressional Campaign Committee Thursday on Facebook for endorsing one candidate over other Democratic candidates in the primary.

The DCCC elevated Gil Cisneros by endorsing him for their competitive "red-to-blue" program, which supports Democratic candidates with the aim of unseating Republican lawmakers in districts across the country. It provides "top-tier candidates with organizational and fundraising support to help them continue to run strong campaigns," according to the program website.

"The son of a public-school cafeteria worker and Vietnam veteran, Gil attended college on an R.O.T.C. scholarship and served our country as a naval officer for ten years. An education policy expert, he started a foundation to create more opportunities for local students and give back to his community after winning the lottery in 2010," the program's website reads.

Marian Bodnar, the leader of Indivisible's chapter in California's 39th Congressional District, wrote on Facebook she may have "overstepped her boundaries" but that she sent an email to the DCCC, grilling the group for its endorsement. 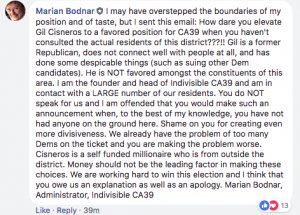 "How dare you elevate Gil Cisneros to a favored position for CA39 when you haven't consulted the actual residents of this district???!! Gil is a former Republican, does not connect well with people at all, and has done some despicable things (such as suing other Dem candidates)," Bodnar said. "He is NOT favored amongst the constituents of this area. I am the founder and head of Indivisible CA39 and am in contact with a LARGE number of our residents."

She went on to say she was "offended" the DCCC would make the announcement about Cisneros and accused the group of "creating even more divisiveness."

"We already have the problem of too many Dems on the ticket and you are making the problem worse. Cisneros is a self funded millionaire who is from outside district. Money should not be the leading factor in making these choices. We are working hard to win this election and I think that you owe us an explanation as well as an apology," Bodnar added.

This is not the first time the DCCC has received flack for endorsing candidates in Democratic primaries. Back in February, the DCCC published opposition research against Texas Democratic candidate Laura Moser on their website.

Lillian Salerno, an Obama administration appointee and Democratic House candidate in the Dallas-area 32nd Congressional District, sent out a press release in late March blasting the DCCC for getting involved in another primary. She said people in Texas are "sick and tired of a bunch of Washington insiders trying to make their decisions for them."