Sen. Tammy Baldwin (D., Wisc.) attended a fundraiser Wednesday at a K Street law firm that provides free services to the gun control lobby, according to an invite of the event obtained by the Washington Free Beacon.

"Tammy has devoted her career to public service, and has served at the local, state, and Congressional levels since 1992, becoming Wisconsin's first woman and openly gay member of the House in 1998 and of the Senate in 2012," the invite says.

"She is a passionate advocate for health care, and she was one of the key champions of the Affordable Care Act, including [illegible] the provision that kids be allowed to stay on their parents' insurance plans until they are 26 years old. She also led the effort to protect people with illnesses to make sure no one is denied care because of a pre-existing condition."

The invitation provides a link to make donations to Baldwin's campaign. 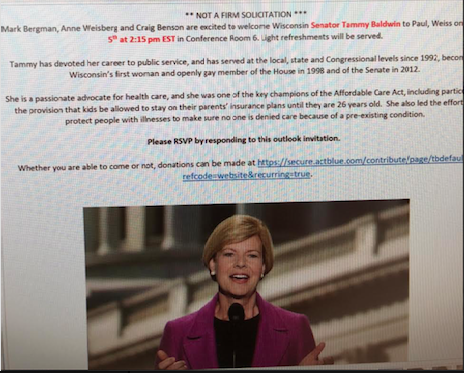 Paul, Weiss is headquartered in New York City but Baldwin placed a vote at 12:10 p.m., Senate records show, which was just two hours before the start of the 2:15 p.m. fundraiser, indicating that the Democratic senator likely attended the event at its D.C.-based office on K Street.

Paul, Weiss is part of a coalition of law firms that joined gun control organizations to provide pro-bono services for the lobby.

The firms conduct activities such as challenging concealed carry laws and its top corporate lawyers provide tens of millions of dollars of free work for the gun control groups, which can cost upwards of $1,000 per hour.

"This effort is highly unusual in its scale," the New York Times reported when the coalition formed in 2016. "Although law firms often donate time to individual causes, and some firms have worked on gun control on a piecemeal basis, the number and the prominence of the firms involved in the new coalition are unheard-of for modern-day big law. Other firms are expected to join in the coming months."

Baldwin's campaign did not return a request for comment. Mark Bergman and Craig Benson, who hosted Baldwin at the firm, also did not respond to inquiries on the event.

Jess Ward, campaign manager for Republican Leah Vukmir, Baldwin's challenger, said the first-term senator is letting Wisconsinites down by failing to meet with Judge Kavanaugh while fundraising at a firm that wants to restrict Second Amendment rights.

"Senator Baldwin is letting us down by failing to meet with Judge Brett Kavanaugh about judicial issues affecting Wisconsin, but finds time to solicit campaign contributions from a corporate law firm that wants to restrict Second Amendment rights," Ward told the Free Beacon. "Not only will Leah Vukmir meet with every Supreme Court nominee, she’ll use those meetings to advocate for our constitutional rights."

Baldwin immediately opposed Kavanaugh and did not reach out to the White House asking for a meeting with the nominee until after Vukmir said that she would meet with every Supreme Court nominee if elected.

Baldwin's campaign sent out a fundraising email two hours before the fundraiser at Paul, Weiss saying that the senator is "working overtime this week" to convince her colleagues in the Senate to oppose Kavanaugh's nomination.