The Biden Institute sits in a stately, colonial brick house on the west side of the University of Delaware's sprawling campus. It is peppered with smiling cardboard cutouts of the former vice president.

The institute has served as a landing spot for some of Biden's former—and potentially future—White House advisers, many of whom serve on the institute's staff and on an affiliated policy advisory board. There is Biden's sister, Valerie Biden Owens, the institute's vice chair, and Biden's former senior adviser, Michael Donilon, who serves as managing director. On the policy advisory board are, among others, former Biden chief of staff Bruce Reed, former domestic and economic policy adviser Don Graves, former deputy attorney general Sally Yates, and former energy secretary Ernest Moniz.

But unlike similar institutions housed at public universities, the Biden Institute does not disclose the sources of its funding or its staff and executive salaries. A spokesman for the university, which receives over $100 million in taxpayer funding, said the Biden Institute is not subject to federal Freedom of Information requests because it is privately funded. Its donors remain unknown.

"Only about 11 percent of the University's operating budget is made up of public funds, so many of our departments and employees are not supported by public funds," the university’s vice president and deputy general counsel Jennifer Becnel-Guzzo told the Washington Free Beacon. "That is the case with the Biden Institute and the Biden Senate papers." 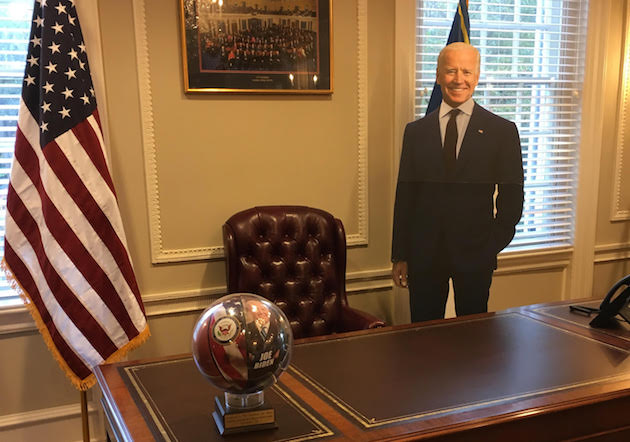 It is unusual for public universities to be exempt from Freedom of Information requests, but state legislatures in Delaware and neighboring Pennsylvania passed laws that exclude state universities from the transparency laws. Delaware state law stipulates that the "activities of the University of Delaware" are not considered public with the exception of the board of trustees and "documents relating to the expenditure of public funds."

The Biden Institute is free to make those disclosures voluntarily, however, but has chosen not to do so. The institute did not respond to a request for comment seeking information on its donors and staff salaries. A university spokesman, Peter Bothum, responded to a request for comment sent to the Biden Institute and said simply that the university is not required to disclose the information.

A spokesman for the Biden campaign did not respond to a request for comment.

Biden, who graduated from the university in 1965, established the institute in 2017 as an offshoot of the Biden School of Public Policy and Administration. According to its website, the institute is devoted to addressing problems from climate change to criminal justice reform.

"Our goal at the institute is going to be to establish an intellectual center for scholars, policymakers, activists, and national leaders, and our mission is going to be to try to help shape and influence the work on some of the nation’s toughest problems," Biden said at an event to mark the institute's launch.

Throughout the campaign, the former vice president has battled the perception that his family and friends have exploited their proximity to him for financial gain. His son Hunter’s business dealings with the Ukrainian oil company Burisma have for months now been the subject of national headlines. News reports have also shed light on how his brother, Frank Biden, leveraged his fraternal relationship in business.

The Biden Institute's lack of transparency sets it apart from similar public policy organizations. The McCain Institute for International Leadership, founded by Arizona State University in 2012, lists its donors publicly, though it is not required to do so. It is also subject to the state's public records law, according to a source familiar with its operations.

In addition to providing a landing spot for the former vice president's friends and family, the Biden Institute serves as a means of forming new alliances that may be useful during the campaign and, potentially, in a future presidential administration.

The institute's policy advisory board is composed of political allies that could be useful to any Democratic presidential candidate. They include Barack Obama's political strategist David Plouffe; the presidents of the Service Employees International Union, the United Farm Workers, and the International Association of Fire Fighters; and the former Republican-turned-Independent strategist and frequent MSNBC guest Steve Schmidt, who remained on the board while he consulted for former Starbucks CEO Howard Schultz's short-lived presidential campaign. The advisory board members are not paid, according to a university spokesman.

Though the Biden Institute has maintained a low profile throughout the campaign season, a 2018 BuzzFeed piece published before Biden announced his candidacy described the organization's policy advisory board as part of "a very familiar playbook: a potential presidential run rooted in old-school, establishment politics." The piece argued that "the list of names, with the occasional exception, offers a glimpse of the people that would be likely to orient themselves around Biden in the event of a run: corporate leaders, union bosses, and longtime Obama allies."

Biden, who served as a U.S. senator from Delaware for 36 years, donated his senatorial papers to the University of Delaware in 2012, but they remain unavailable to the public. Though they were initially scheduled to become available December 31, 2019, the university delayed their publication until two years after Biden "retires from public life."

Dole turned his papers over to the University of Kansas in 2000, and they became publicly available when the Dole Institute opened three years later, long after Dole had retired from public life.

"The institute was dedicated in 2003 and, at that point, we had the capability to allow the public to come in and research using the archives," a spokesman for the Dole Institute said. Prior to that, "we didn't have a building."