Administration leaders are moving to curb the nation's exploding suicide crisis through a new, three-digit number to reach the National Suicide Prevention Lifeline.

Federal Communications Commission chairman Ajit Pai expects to designate 988 as a special code to connect people quickly and easily to the lifeline, he told the Washington Free Beacon in an interview—a response to the two-decade surge in suicide deaths that Pai called "stunning" and "epidemic."

The change will be voted on by the full FCC at its July 16 open meeting and is expected to pass unanimously, one FCC staffer told the Free Beacon. The new code will easily direct callers to the 10-digit line currently operated by a network of publicly funded crisis centers that provide immediate counseling, mental health referrals, and emergency services to people contemplating suicide.

A suicide hotline short code, under consideration for two years, has been widely supported by suicide experts—and has grown increasingly salient as the coronavirus crisis has driven up calls for help. At the same time, those same experts have cautioned that expanded accessibility of the already overtaxed crisis hotline must be paired with more funding—Dr. Bart Andrews, a board member at the American Association of Suicidology, told the Free Beacon that current funding levels are "completely insufficient to meet the need that 988 will create."

That makes Pai and allies' move a much-needed, but likely insufficient, first step in slowing the rise of America's suicide crisis. It also puts the ball in Congress's court to ensure that increased demand for the suicide hotline is met with appropriate resources.

Earlier this week, Pai presented draft rules to his colleagues on the commission that proposed designating 988 as a short code that would redirect callers to the Suicide Prevention Lifeline. If passed, the rules would oblige all service providers to forward calls to 988 no later than July 16, 2022.

The proposed changes are an implementation of the mandate of the National Suicide Hotline Improvement Act of 2018, which instructed the FCC to investigate the feasibility of a three-digit code. But they are also, Pai told the Free Beacon, a response to the surge in suicides nationwide.

"Suicide in the United States has reached levels not seen since World War II, epidemic levels especially among vulnerable populations like veterans," Pai said. "One of the thoughts that has percolated over recent years in Washington is that the designation of a three-digit number could be one way of better connecting those who are struggling with those who could help."

Those figures are alarming by any measure. Official suicide rates indicate that there were more suicides per capita in 2018 than at any point in the preceding 80 years, with death rates rising continuously since 2000 and increasing across age groups. The causes of this alarming increase remain unclear, as the Free Beacon previously reported, while funding for research and prevention remains substantially smaller than that targeted at similarly deadly trends.

The National Suicide Prevention Lifeline, in fact, is one of just a few federally funded suicide prevention programs. The lifeline connects callers to a network of 163 crisis centers, which collectively fielded over 2.2 million calls and over 100,000 "chats" in 2018 alone—a nearly 5,000 percent increase since 2005. 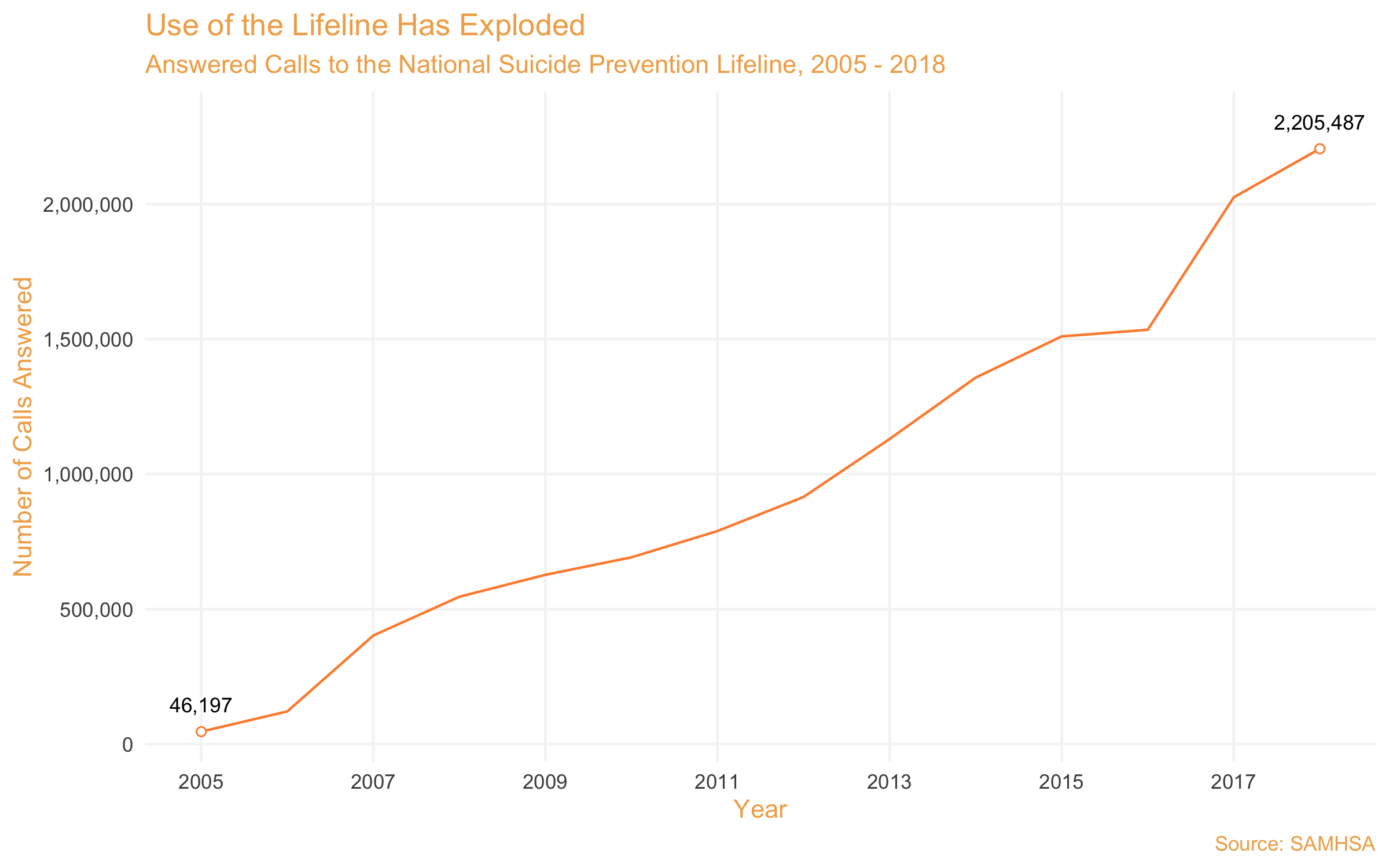 All of that work seems to have a substantial effect on suicide risk. A 2018 survey of callers found that 80 percent of those interviewed after they called in said the hotline stopped them from committing suicide, while 90 percent said it kept them safe. An earlier study identified a significant decrease in suicidality during the call, along with continued decreases in hopelessness and psychological pain in the following weeks.

Andrews, the suicidologist, called the move "a great step forward" but only as long as "subsequent legislation leads to funding that creates and maintains capacity for this life saving service."

That is because funding for the lifeline has not kept pace with demand, rising from $3 million in 2005 to $19 million for 2020—a substantial dollar increase, but one far outstripped by the increased demand for calls.

Pai explained that part of the goal of the delay between enactment and implementation was to allow time to adjust to an expected increased demand: "We also want to give time to those who are staffing the lifeline, who are doing associated work to prepare for what is expected to be an increase in the number of calls."

Added funding, however, is ultimately Congress's call. Appropriators have substantially increased funding in recent years, adding $12 million to the lifeline's budget between FY 2018 and FY 2020. But that may not be enough, especially as the coronavirus takes an added toll on the nation's already strained mental health.

"As volume increases, centers do not get funding increases," Andrews said. "It's a national version of a volunteer fire department."