Though little-known outside it, Stephanie Kelton has fast become one of the biggest names in the progressive policy world.

A Stony Brook University professor, Kelton has served as chief economist to Senate Budget Committee Democrats and as a key adviser to Sen. Bernie Sanders (I., Vt.) on both of his presidential campaigns. Earlier this month, Kelton was among Sanders's selections for Joe Biden's "unity task force," giving her a direct hand in crafting the presumptive Democratic nominee's economic platform.

What has really made Kelton's name, however, is her policy views. She is arguably America's loudest and most prolific proponent of Modern Monetary Theory (MMT), a heterodox school of economics that is the subject of her new book, The Deficit Myth.

MMT had a moment last year, when Rep. Alexandria Ocasio-Cortez (D., N.Y.) said that it should be "a larger part of our conversation" about paying for programs like the Green New Deal. MMT entails many ideas, but the one for which Ocasio-Cortez attracted pushback is the one to which Kelton's book is committed: Most fears about budget deficits are wrongheaded and dangerous.

That's a wonky claim, but one with increasingly real stakes. Thanks to the coronavirus, the federal deficit is projected to swell to $4 trillion this year. Republicans are nervous, while Democrats seem eager to spend trillions more. The resultant standoff will be decided in part by both sides' views on deficits—meaning Kelton's arguments could have a real impact on the country's fiscal future.

It is helpful, therefore, to understand where Kelton and her fellow MMTers are coming from. They've produced a great deal of literature—even a 600-page textbook—but The Deficit Myth is an accessible, if at times repetitive, introduction to MMT's main ideas for the lay reader.

The federal government spends a lot: $4.5 trillion in 2019. When it spends more than it taxes, it runs a deficit—$1 trillion last year—that it pays for by borrowing, adding to the national debt—about $25 trillion and counting.

These big numbers are a popular political bugaboo, which Republicans and Democrats trot out to argue respectively for cutting spending and raising taxes. If Congress doesn't "pay for" its deficits, they argue, financial ruin will follow, in much the same way that normal people cannot rack up debt without eventually going broke.

The idea that the federal government has the same financial constraints as a household is what Kelton terms the "deficit myth." The MMT argument is the contrary: Unlike you or I, the U.S. government can spend and borrow as much as it wants to without any risk of going bankrupt.

The difference, Kelton argues, is that whereas people are currency "users," the U.S. government is a currency "issuer," with a monopoly on production of dollars. That, plus the fact that the dollar is not pegged to another currency or to a commodity like gold, and that federal debt is only denominated in its own currency, grants the government the special status of "monetary sovereignty."

Monetary sovereignty means it is technically impossible for the government to "run out" of money, because it can always borrow or print more. It is also impossible for it to default, because it can always print money to service debt. The only constraint on deficit spending, Kelton argues, is inflation—the government cannot spend more into the economy than its real capacity permits.

Do politicians actually believe this deficit myth? In Kelton's defense, they do seem to talk a lot about fiscal responsibility on the campaign trail. But the book focuses more on deficit rhetoric than on actual policy examples. Actions, after all, speak louder than words. The federal budget has been in deficit for 76 of the last 89 years; deficit-constraining measures like the PAYGO rule—about which Kelton makes a great deal of hay—are routinely waived. Are policymakers really that worried about deficits? 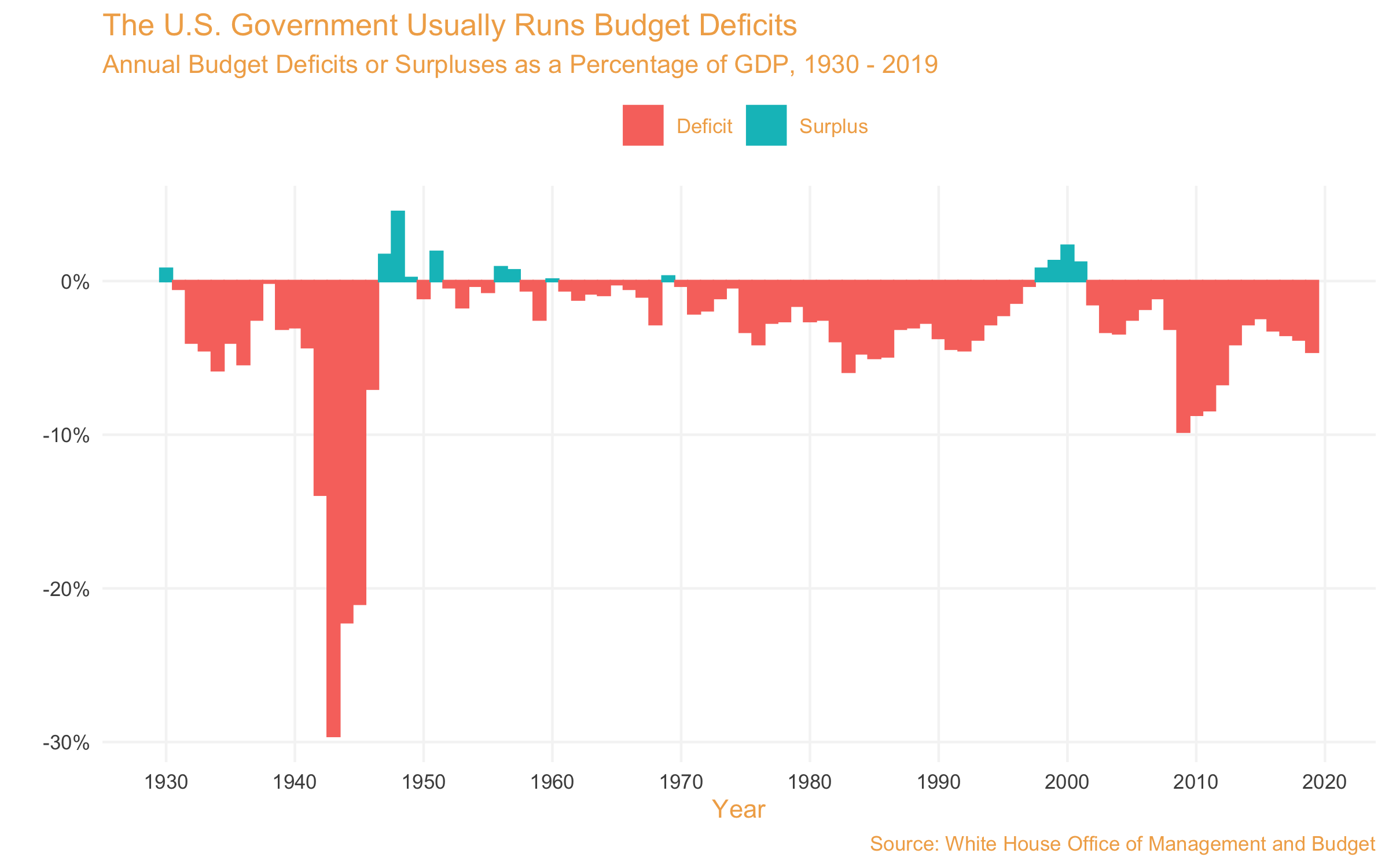 To this, Kelton and co. might retort that the relevant question is not the existence of deficits, but their size. They argue, following the doctrine of "functional finance," that the budget's size should be dictated not by debt sustainability, but by the amount of slack productive resources—labor, land, factories, etc.—available to meet that spending. If the economy is at capacity, deficits send more money after the same goods, raising prices. But if the economy is below capacity, then added government spending can mobilize otherwise stagnant resources without inducing inflation.

That the government should deficit spend in times of recession is not controversial with most modern economists. What's distinct about Kelton is that she wants a reorientation of the government's whole approach to spending, one unburdened by concerns about the size of the deficit. The question policymakers should always ask, she contends, is not "can we afford it," but whether added spending will induce undesirable inflation.

Exercising full "monetary sovereignty" would mean Congress sets a list of policy priorities, then prints money to meet them, regardless of the balance sheet implications. Doing so, Kelton writes, is important because the "deficit myth" stands in the way of the other "deficits" in our country—the "education" deficit, the "climate" deficit, the "democracy" deficit, and so on. If inflation becomes an issue, Congress simply raises taxes or borrows more, sucking money back out of the economy.

This proposal is framed as revolutionary because it technically allows for spending unchained from revenues. But it's not clear how much change it actually accomplishes. It amounts, leftist policy analyst Matt Bruenig argues, to a kind of word game, substituting "use taxes and borrowing to pay for spending" with "use taxes and borrowing to offset the inflation that pays for spending." The net effect is the same, just with Congress bound by the price level instead of the debt level.

There may or may not be more room for deficit spending right now—bracketing the coronavirus, inflation has been persistently below 2 percent since the Great Recession, and private domestic investment has flagged. But "government can worry less about deficits right now" is not the same as "Congress can be trusted to spend freely and then manage inflation when it strikes." In point of fact, the biggest problems with MMT are its assumptions about politics—semi-utopian assumptions characteristic of the progressive policy world.

Kelton writes late in the book that we have already entrusted the government with "monetary sovereignty." The best way to bind its otherwise unbridled spending power, she argues, is through a series of "automatic stabilizers," chief among them a jobs guarantee, which would tie spending levels to real economic variables rather than political whims.

This seems a rosy outlook on how the government would act fully unconstrained by debt concerns. Necessarily, MMT means asking elected representatives to make judgments about measuring inflation—a notoriously tricky undertaking—or about their incompetence to make such judgments. But both judgments and measurements are subject to political incentive; an MMT world is one where price measures fall prey to Goodhart's law, determined not objectively but by what Congress wants it to be.

There is no particular reason for Congress to bind itself to "automatic stabilizers" when unbridled spending can flow to its preferred interest groups. Subjecting the price level to the political process sets stability concerns against the demands of entrenched constituencies—a state of affairs central bank independence was originally designed to combat. Congress already does a poor job following a standard—balancing the budget—that Kelton thinks does not matter. In an MMT world, horse-trading drives us inexorably towards hyperinflation—a political reality that no wonky stabilizers can address.

Putting aside this argument, it is also worth noting that if MMT does allow the government to spend freely, it need not do so in line with Kelton's political program. Kelton argues that even under MMT, taxes are needed to balance the distribution of wealth in society. Unconstrained by "fiscal responsibility," however, it is hard to imagine politicians justifying any taxes at all—"we need to reduce inflation" can only convince the 30 percent of the populace who understand how inflation is reduced.

MMT already has quiet support among some conservatives who see its usefulness for their own ends. Take, for example, a report from Sen. Marco Rubio's (R., Fla.) office which approvingly cites MMT to argue for a national industrial policy. Abandoning the economic "neutrality" which informs present deficit debates by no means results in the prioritization of the values Kelton prefers. The point is, MMT can induce a policy arms race.

Myths, after all, serve a political function. The "myth" of balanced budgeting is meant to reduce crowding out of private investment and control inflation. It also imposes a potent check on the government's fiscal reach.

The full exercise of "monetary sovereignty," by contrast, is not merely a threat to long-run macroeconomic stability. It is also a profound expansion of government power, with all that entails, and the benefits of which Kelton and her allies are unlikely to enjoy.

Review: ‘Fight House: Rivalries in the White House from Truman to Trump’