The senior White House official who bragged about creating a pro-Iran "echo chamber" to mislead Americans about last summer’s nuclear agreement is scheduled to keynote a conference sponsored by an organization that has long been accused of acting as a pro-Tehran lobbying front.

Ben Rhodes, a top national security adviser to President Obama, is slated to be the keynote speaker at an upcoming gathering hosted by the National Iranian American Council, or NIAC, which played a key role in bolstering the nuclear agreement and has long operated under suspicion that it acts as Tehran’s lobbying shop. 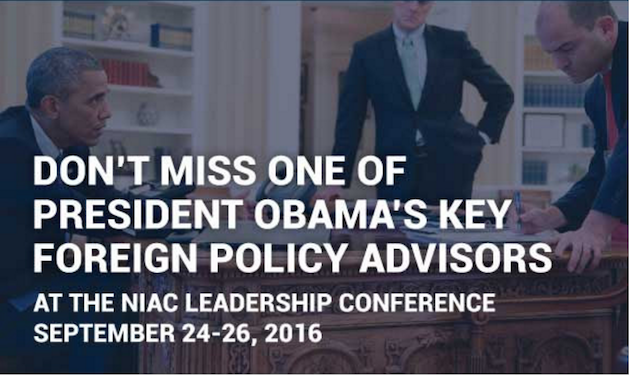 Rhodes has been engulfed in a growing scandal following the revelation that he enlisted a roster of journalists and experts to spin the public in favor of the deal.

Outside organizations such as NIAC and the Ploughshares Fund, which is co-sponsoring the upcoming conference, were cited as key parts of the White House’s effort to mislead the public about the deal.

The Sept. 25 event also is being co-sponsored by the Rockefeller Brothers Fund, a philanthropic group that has been criticized for funding anti-Israel activities and organizations that support boycotts of the Jewish state. The fund bankrolls some of the leading backers of the global BDS movement against Israel, which has raised concerns among some that the administration is breaking its promises to oppose this movement.

The NIAC event is being viewed as another sign that the White House is seeking to boost these organizations in return for their efforts to push the nuclear deal and support the pro-Iran "echo chamber."

"Pro-Iran lobbies like NIAC were helpful to Ben Rhodes when he created his echo chamber to sell the Iran nuclear deal and the Iran money-for-hostages deal," said one senior foreign policy consultant who has worked with Congress on the Iran deal. "It's only fair that Rhodes would return the favor by keynoting NIAC's conference. It's not clear what he'll talk about more: Iran developing its nuclear program, Iran expanding across the region, or Iran seizing more American hostages including those with close links to NIAC itself."

The NIAC conference also will be attended by Rep. Jared Huffman (D., Calif.), an Iran deal backer, according to an invitation for the event circulated by NIAC.

NIAC makes note of Rhodes’ efforts to deepen diplomacy with the Islamic Republic in its invitation.

The event’s top billed sponsors include Ploughshares and the Rockefeller Brothers Fund.

Ploughshares, a longtime funder of pro-Iran organizations and media outlets, has found itself on defense in recent months following disclosure of its role in Rhodes’ "echo chamber."

Ploughshares funded writers and organizations in order to create a network of Iran deal "validators" who could influence public opinion at the White House’s behest.

Most recently, the Washington Free Beacon disclosed that a Washington Post contributor who touted the administration’s $400 million payment to Iran had been funded by Ploughshares. Neither the Post nor the writer disclosed this fact.

Ploughshares also moved money to National Public Radio to influence its coverage of the Iran deal.