The U.S. Navy has wasted roughly $4 billion in taxpayer money over the past six years due to the repeated failure by Congress to pass a budget that fully funds the military, the secretary of the service said Monday.

"Since 2011, we have put $4 billion in a trashcan, poured lighter fluid on top of it, and burned it," Sec. Richard Spencer said in remarks at the U.S. Naval Institute's Defense Forum in Washington.

"It's enough money that it can buy us the additional capacity and capability that we need. Instead, that $4 billion of taxpayer money has been lost because of inefficiencies [caused by] continuing resolutions," he added.

Congress has forced the military to operate under stopgap spending bills for the past eight years to avert government shutdowns amid partisan divisions. The temporary budgets freeze defense funding, forcing the Defense Department to shuffle funds from modernization and hiring to support current missions.

The Senate in November passed a $700 billion defense policy bill in line with the Trump administration's calls for a larger military, but it exceeds federal spending caps by roughly $85 billion, meaning the funding may never come to fruition.

With government funding set to expire on Friday, Republicans are moving to pass another short-term resolution to avoid a shutdown and buy more time to negotiate a long-term spending package.

Lawmakers will have to reconcile the cost of the National Defense Authorization Act with current spending limits, but members have yet to strike a deal. A showdown is expected because Senate Democrats have pledged to block major increases to defense spending unless Republicans approve equal increases to nondefense programs.

Echoing sentiments from senior defense officials, Spencer said stopgap resolutions and budget constraints have been the "most harmful impediment" to rebuilding service readiness and achieving modernization.

"Funding issues born of the Budget Control Act and continuing resolutions have taken a toll on readiness, maintenance sites, and have also cost us time and resources that we cannot buy back," he said. "Urgency is the battle cry."

U.S. Sides With Vietnam in Maritime Dispute With China 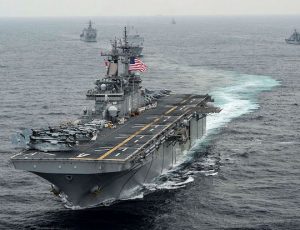