A division of the U.S. Pacific Air Forces (PACAF), the branch tasked with confronting China, has ordered its senior leaders and commanders to stop using gender pronouns in written formats, saying the shift to more neutral language will help improve the fighting force’s "lethality."

"In accordance with the Diverse PACAF priority, ‘We must embrace, promote and unleash the potential of diversity and inclusion," states a May email sent to senior leaders and commanders at the Andersen Air Force Base in Guam, which operates under the Pacific Air Forces, according to a partial copy of the order obtained by the Washington Free Beacon. 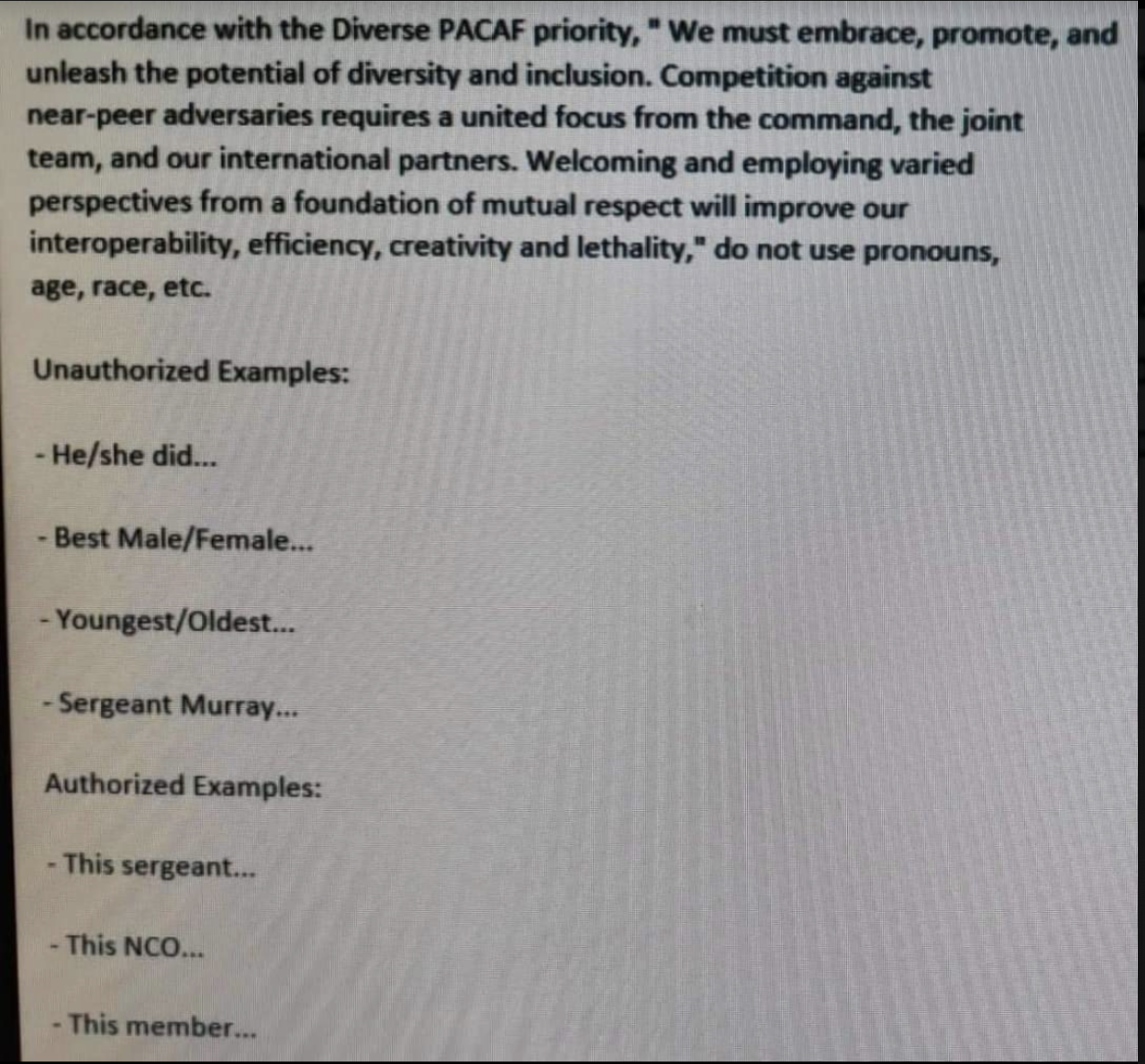 Leaders at the base are instructed, "Do not use pronouns, age, race, etc." when writing performance reviews or other materials, such as recommendations for awards. "Competition against near-peer adversaries requires a united focus from the command, the joint team, and our international partners. Welcoming and employing varied perspectives from a foundation of mutual respect will improve our interoperability, efficiency, creativity, and lethality."

The policy change is part of a larger effort by the Biden administration and U.S. military to foster what it says is a more culturally sensitive environment. The U.S. Navy, for instance, recently published a video instructing its sailors on proper gender pronouns. The Army also mandates gender identity training and trains officers on when to offer subordinates gender-transition surgery, the Free Beacon first reported in March. Critics of these moves say a woke cultural agenda is handicapping America’s fighting forces and distracting it from pressing global challenges, such as terrorism and China’s aggressive war moves.

A spokesman for the Anderson Air Force Base confirmed the authenticity of the email, telling the Free Beacon that the Air Force is shifting "to a narrative writing format for awards and performance reports." The ban on "pronouns, age, race" and other written descriptors is "intended to eliminate any information that could identify the nominee's name, gender, age, or race so that all members had a fair and equal chance at winning."

The Andersen air base, the spokesman said, specifically "developed local quarterly award guidance to ensure each nominee was considered without the potential of unfair biases." Leaders at the base are "continually working to remove barriers and [are] dedicated to ensuring all members have the opportunity to excel."

The email goes on to list "authorized" and "unauthorized" examples of pronoun use.

The policy shift jibes with the Pacific Air Forces’ overarching goal to promote "diversity and inclusion" at all levels of the service, according to the military spokesman.

Rebeccah Heinrichs, a defense policy expert and senior fellow at the Hudson Institute think tank, told the Free Beacon that the Pacific Air Forces’ intense focus on pronoun issues is "a giant sucking waste of time."

Military leaders who should be focused on defending the United States from an ever-increasing array of threats—particularly in the Pacific, where China is flexing its military might—are instead spending valuable time thinking about rules on proper pronoun use.

"It is painful to think about the amount of time servicemen have already spent writing these rules instead of figuring out how to beat China," Henrichs said. "Somebody needs to remind DoD leadership that they’re in the business of preventing and winning wars and not in the Oberlin lounge."