Sanctions relief provided to Iran under a recently inked nuclear accord is expected to boost the Islamic Republic’s military spending by nearly $5 billion dollars, with much of that money going to fund Iran’s terror forces, according to a new study by a Washington, D.C.-based think-tank.

Under the parameters of the deal, Iran will receive nearly $150 billion in sanctions relief and cash assets. Because the money comes with no strings attached, it is expected that Iran will spend the money to fund its global terrorism operation, as well as its defense sector.

The cash windfall will allow Iran to put another $4.8 billion into its defense budget if current spending trends remain the same, according to a new study by the American Action Forum (AAF).

The study comes amid multiple reports indicating that Iran is building a series of new weaponized drones, missile defense shields, and other types of military hardware meant to deter an attack from Western forces in the region.

Iran is currently spending about 3.4 percent of its total public budget on defense, according to AAF, which used official documents published by Iran to conduct its study.

About 65 percent of the money budgeted for defense is spent on Iran’s Revolutionary Guard Corps (IRGC), the elite paramilitary fighting force that is known to coordinate and conduct terror activities across the globe.

"If current budget trends persist, the Iran deal would mean at least $4.8 billion in additional Iranian defense spending and a 50 percent budget increase for the IRGC," AAF concludes.

The number could even increase if Iran chooses to boost defense spending, which has been constrained due to years of sanctions on Iran that crippled its economy.

"Nothing in the deal would prevent Iran from spending more than that to fund their military or terrorist organizations and authoritarian regimes throughout the Middle East," AAF concludes. "Already this summer, Iran’s supreme leader, Ayatollah Ali Khamenei, ordered that the Islamic Republic would increase defense spending to at least 5 percent of its budget." 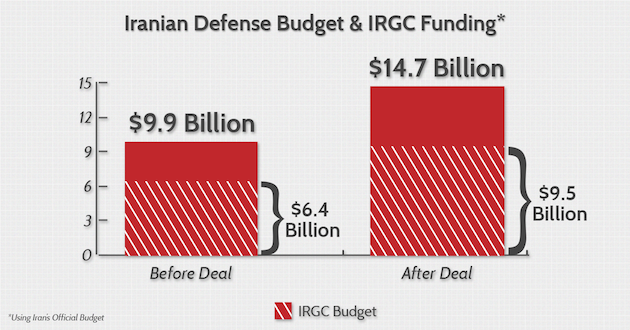 In addition to unfreezing cash assets belonging to Iran, the Obama administration has agreed to drop sanctions on Iranian companies and on a multi-billion dollar financial empire owned by the country’s Supreme Leader Ali Khamenei.

International sanctions on the IRGC—including its military branches—also will be dropped under the deal.

"While it is unlikely that Iran accurately reports its military spending, it is informative to consider the country’s official budget as a minimum," AAF wrote in its study. "This year, the Iranian government reported that it will spend 3.4 percent of its total budget on defense, which amounts to almost $10 billion."

"Iran reports that it spends 65 percent of its defense budget to fund the Islamic Revolutionary Guard Corps (IRGC), the Iranian elite paramilitary force," it states. "That works out to 2.2 percent of its total budget or over $6 billion."

Much of this money goes to fund the IRGC’s operations abroad.

"The IRGC actively supports terrorist organizations throughout the Middle East, such as the Houthis in Yemen, Hezbollah in Lebanon, and Hamas in Gaza," AAF explained in the study. "Iran also sends billions of dollars and provides military assistance to Syria."

Additionally, a "spokeswoman for the United Nations recently estimated that Iran spends $6 billion per year to support the regime of Bashar al-Assad."

The amount of money Iran puts toward its military and global terror operations could be larger than some estimates by the United States and other analysts, according to AAF.

"It is important to remember that much of Iran’s financial support for terror remains off the books," the study concludes. "Iran’s official budget, however, reveals the minimum amount the country spends on the military and the IRGC."

"If current spending trends continue, the $140 billion windfall would mean at least an additional $4.8 billion in defense spending," it states. "Of this, $3.1 billion would go specifically to the IRGC—amounting to a 50 percent budget increase."

In July, Iran announced that it would unveil a range of new missile defense systems in September.

These missile systems will have "the capability to stand against electronic warfare and mid-range and long-range radars will join the integrated air defense system on September 1," Iranian military officials announced at the time.

In April, officials announced the construction of a missile-launching robot capable of firing on hostile targets.