Six Arrested for Assaulting Cops as Disorder Reigns in D.C.

Most arrests since first wave of protests

Six people were arrested for assaulting police officers in Washington, D.C., over the weekend as the nation's capital was gripped by the worst unrest it has seen since early June.

The D.C. Metropolitan Police Department arrested a total of 27 over the course of a chaotic four days, which began Thursday as protesters grew violent after President Donald Trump broadcast his acceptance of renomination for the presidency from the White House lawn. In total, 15 MPD officers sustained injuries, Chief of Police Peter Newsham announced during a press conference Monday, including one officer whose nose was broken.

The escalating violence against police is part of a broader wave of unrest that has gripped the city in recent weeks. Protesters harassed policemen in the Adams Morgan neighborhood Saturday night, with one captured on video making violent gestures at and cursing out a stoic officer. Such street harassment has become a common sight on the city's streets, with even Mayor Muriel Bowser (D.) condemning protesters who shout and curse at peaceful diners.

The disorder in the nation's capital mirrors the experience of other American cities, which have seen renewed protests, looting, and violence in the wake of recent high-profile police shootings. In cities such as Chicago and New York, protests have taxed police resources, leading to spikes in violent crime—the same trend holds true in D.C., where homicides are at their highest levels since at least 2008.

Trouble began Thursday evening when, according to Newsham, groups formed in response to the end of the RNC, with some throwing projectiles and launching fireworks at police officers. A "March on Washington" scheduled for Friday, the 57th anniversary of the original march, went off peacefully, Newsham said, but separate agitators used laser pointers, incendiary devices, and tear gas on cops on Saturday evening near the White House.

The disorder continued into Sunday evening, with a 100-person group marching, setting small fires, and throwing urine at police officers.

The arrests for assaults on cops came Friday and Saturday night, including three arrests near the White House on Friday. Those six total arrests are the most in a two-day period since the end of June. 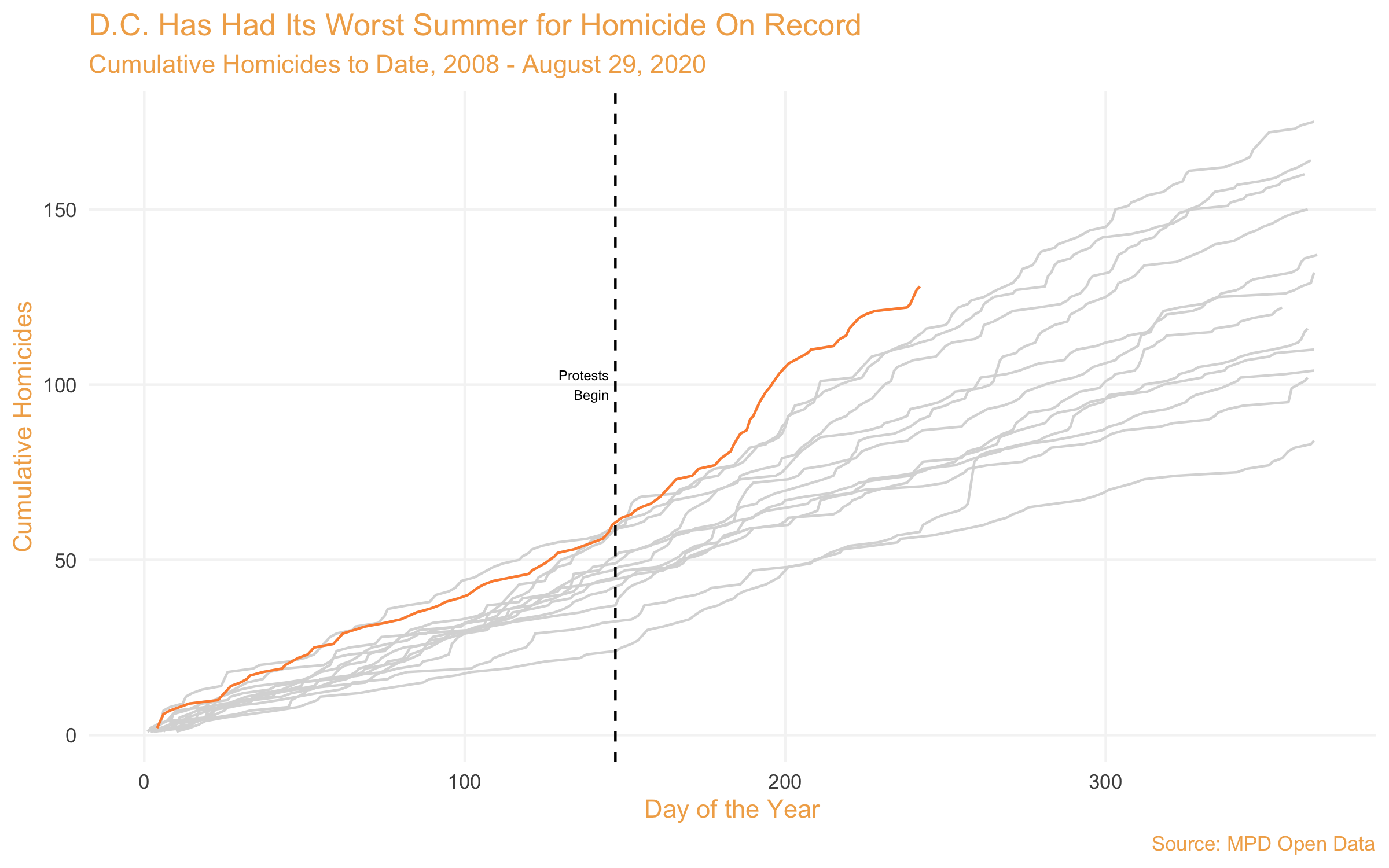 The resurgence of disorder has likely contributed to the city's spiking homicide rate. Data from the MPD show that murders have surged in the wake of protests, with more deaths in the city as of the end of August than in any other year since 2008.

Some members of the media, meanwhile, have been quick to downplay the disorder. As police officers were assaulted over the weekend, Washington Post journalist Dan Zak tweeted a video of the peaceful National Mall, writing, "Washington, D.C., is simply out of control."