The Sinpo-class submarine attempted to launch North Korea’s KN-11 submarine-launched ballistic missile during a test Nov. 28 in the Sea of Japan, but officials said the missile failed to properly eject from its firing tube, causing damage to the submarine and its sail.

Details of the damage were not disclosed by officials familiar with intelligence reports of the test.

The assessment of damage to the submarine was based on debris analyzed by U.S. satellites and other technical intelligence means.

The failed test is considered a significant setback for the missile submarine program, the officials said.

The KN-11 SLBM is part of North Korea’s plan to develop missiles capable of hitting U.S. targets in the region and at long distances, analysts said. North Korea is believed to have a small nuclear warhead for its missiles. 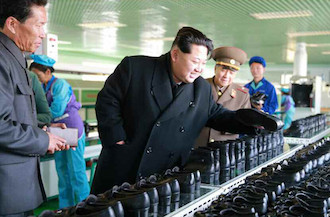 The failed test was closely monitored by U.S. intelligence agencies that have been tracking the SLBM development program closely since at least last year.

The test was carried out in the Sea of Japan near Wonson, a coastal city in central North Korea.North Korean state-run media made no mention of the failed test. An earlier flight test was trumpeted by North Korea as a major step in the nuclear program.

The officials said it is believed North Korean supreme leader Kim Jong Un was present for the failed test. Kim was photographed visiting a shoe factory in Wonson the day before the missile test failure.

The missile was believed to be fired from a modified submarine whose origins are unknown.

"This test appears—at least in the early analysis—to be an actual test of a submarine along with the SLBM,." Bechtol said. "Thus, since reporting confirms that this is the third test this year, Pyongyang seems intent on testing and fielding this submarine and the matching ballistic missile as quickly as possible."
Bechtol said more failed tests can be expected on the way toward fielding a missile submarine. The weapon will give Pyongyang "a dual-strike capability against targets all over Asia and perhaps Hawaii," he said.

It was the second test of what the Pentagon is calling the KN-11 missile and North Korea calls the Bukgeukseong-1.

A KN-11 flight test conducted in May was a success. The KN-11 was ejected from underwater and flew a short distance. Kim was present for that test.

A model of the new SLBM was shown for the first time in North Korea in October.

The miniature missile model appeared on state media along with two other ballistic missiles at an exhibition in Pyongyang marking the Oct. 10 anniversary of the founding of the ruling Workers’ Party of Korea.

The design of the SLBM looks similar to China’s JL-2 SLBM, suggesting covert cooperation between Beijing and Pyongyang.

North Korea’s road-mobile intercontinental ballistic missile is based on a transporter-erector launcher supplied by China.

The Washington Free Beacon first disclosed the program in August 2014.

The Sinpo-class submarine has been seen in commercial satellite photographs at a special shipyard at the Sinpo port.

The submarine, which launches missiles from one or two tubes in its sail, may have been redesigned from several Soviet-era Golf II ballistic missile submarines obtained for scrap metal in the early 1990s.

The submarine have been refurbished or built new from the Golf II design.

North Korea obtained several decommissioned Soviet-era Golf II ballistic-missile submarines in the early 1990s. It is believed the North Koreans either refurbished the subs or copied their design for an indigenous submarine.

According to U.S. government documents revealed by Wikileaks, North Korea obtained a submarine-launched ballistic missile known as the SS-N-6 from Russia several years ago.

Intelligence agencies disagree on when North Korea will be capable of fielding a ballistic missile submarine. Prior to the failed tests, estimates for the first deployment of missile submarine ranged from one year to five years.

U.S., South Korean, and Japanese officials involved in efforts to press Pyongyang to end its nuclear program met in Washington last week and agreed to step up efforts to counter the SLBM program.

"We shared an understanding that the international community should send a strong message to deter strategic provocations like SLBM tests or satellite launches," Hwang was quoted as saying after the meeting.

"We’re obviously concerned by those reports," Toner said. "We continue to send a very strong and clear and consistent message … to North Korea to refrain from any violations of U.N. Security Council resolutions or any other actions that raise tensions in the region and threaten international peace and security."