Sen. Ted Cruz (R., Texas) tussled with and shut down a group of left wing activists from CODEPINK on Thursday during a rally outside the White House organized by activists opposed to a recently inked nuclear accord with Iran.

Cruz was meant to speak at a gathering of around 50 protestors and lawmakers who had gathered in front of the White House to express their opposition to the Iran nuclear deal, which will provide the Islamic Republic with billions of dollars in sanctions relief while keeping its core nuclear infrastructure intact.

However, as Cruz approached the podium, a delegation of CODEPINK activists who had crashed the event attempted to shut him down by screaming over a loud speaker.

The rally, which was organized by the Concerned Women for America (CWA), also was scheduled to include Sen. Rand Paul (R., Ky.), as well as former Reagan administration official Gary Bauer.

Other CODEPINK activists tussled with members of the CWA delegation and others who had shown up to express their opposition to the nuke deal. At multiple points, shouting matches broke out between the sides, with some thrusting painted signs into one another’s faces and yelling about various issues.

"It is very interesting to see those who profess to believe in free speech are the ones afraid of speech," Cruz shouted back, addressing the CODEPINK protestors head on.

One CODEPINK member responded to Cruz by saying that he does not like "war mongers" and asking Cruz, "Why are you so aggressively violent?" 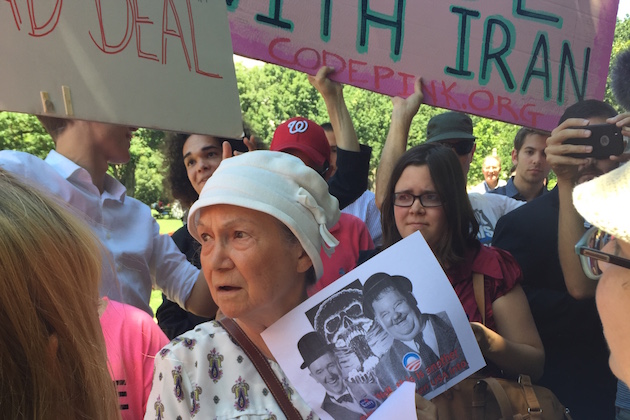 Cruz then invited the interrupter to debate him face-to-face in front of the crowd without the aid of a bullhorn and several other allies.

Addressing Benjamin, Cruz explained how the Iranian nuclear deal would empower Tehran without putting proper limits on its nuclear program and military activities.

"We can have a discussion if we actually have a discussion without being shut down," Cruz said. "If this deal goes through three things will happen. First, over a hundred billion dollars will flow to Iran that they will use to fund Hezbollah, the Houthis [in Yemen], and radical Islamic terrorists. "

"No, that doesn’t make any sense," Benjamin responded, insisting that only the nuclear agreement reached between world powers will stop Iran from building a nuclear weapon.

"What you have been pushing for is going to lead us to war," she said. "Diplomacy, just like we saw the flag up in the Cuban embassy, that’s diplomacy at work."

As Cruz attempted to rebut Benjamin’s points, she tried to interrupt and shout over him.

"Ma’am I did not interrupt you, so I would ask you to show me the same courtesy," Cruz said, eliciting an apology from Benjamin.

"You did not respond to the irrefutable point that this deal with send over $100 billions dollars to Iran and those billions of dollars will be used to murder Americans by jihadists," Cruz explained.

"I recognize that the folks in CODEPINK like to hold up signs saying, ‘Peace with Iran.’ You know who doesn’t reciprocate those views? Iran," Cruz said, to cheers.

"In the midst of this negotiation, the Ayatollah Khamenei led thousands of Iranians in chanting death to America while they burned American flags and Israeli flag," Cruz continued to more applause. "Iran has stated its objective to murder as many Americans as possible. They are not seeking peace with us."

"This deal is a complete capitulation to radical Islamic theocratic zealots who want to murder millions of Americans," Cruz added, again to rousing cheers from those in attendance.

Others, at one point, chanted, "We want Ted."

CODEPINK’s Benjamin responded to Cruz, by accusing him and the anti-nuke deal activist of being "religious zealots" who want to see "a war in the Middle East."

"It’s the radical religious zealots on both sides who don’t want the deal," Benjamin said to boos.

One man could be heard shouting, "What planet is she from?"

Cruz went on to take Benjamin to task for insulting the crowd.

This led another CODEPINK ally to scream and shout at Cruz.

"Sir, are you scared to have a conversation?" Cruz fired back at the protestor. "Are you scared of the truth?"

"Sir, I recognize you find the truth very offensive, but under the first amendment, debate means you have to listen to things you disagree with," Cruz added over the man’s shouts. "And I have listen to what you have said. I would ask you to show the same courtesy, particularly since you have come to our event and crashed it."