The defense strategy report produced by the People's Liberation Army was made public Wednesday and drops earlier veiled references by bluntly identifying the United States as Beijing's main adversary that is undermining world peace.

"The U.S. has adjusted its national security and defense strategies, and adopted unilateral policies," the report said. "It has provoked and intensified competition among major countries, significantly increased its defense expenditure, pushed for additional capacity in nuclear, outer space, cyber and missile defense, and undermined global strategic stability."

The white paper, however, bluntly warned that China is set to use military force against Taiwan if the self-ruled island seeks formal independence. Taiwan is a quasi-U.S. ally and the United States is obligated under the 1979 Taiwan Relations Act to defend it from mainland attack.

Beijing, in another threatening announcement, said this week the PLA is prepared to dispatch forces to Hong Kong, the former British colony that has been rocked by anti-Beijing protests over a new extradition law seeking to undermine democratic rule.

On space warfare, the PLA report states that threats to space "loom large" and as a result space security is now among eight vital Chinese strategic interests.

Other key interests include deterring attacks, opposing Taiwan independence, and "safeguarding national political security"—a reference to the PLA's ultimate mission of keeping the ruling Communist Party of China in power.

"Outer space is a critical domain in international strategic competition," the report said.

While insisting China favors the peaceful use of space, the white paper states that China is developing "relevant technologies and capabilities" for safeguarding satellites while maintaining the ability to safely enter, exit, and openly use space.

Army Lt. Gen. Robert Ashley, director of the Defense Intelligence Agency, was asked during a security forum in Colorado last week if the United States is falling behind China and Russia in military space systems.

"I can't tell you who's in front and who's behind," Ashley said of the space weapons race. 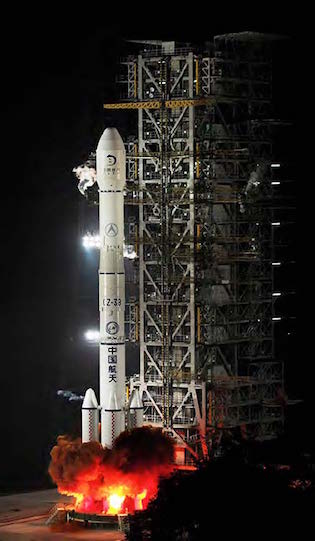 Space has become contested and China and Russia have direct ascent ASAT missiles that "literally can go up and target a satellite," Ashley said July 18.

On the threat from co-orbital satellites, Ashley said small satellites are being outfitted with robotic arms.

"If that satellite nestles up against yours, then you have the ability to damage a sensor," he said. "You can cut lines. You in fact could disable that with a co-orbital satellite."

Other space weapons involve the use of electronic warfare that can jam synthetic aperture radars and other kinds of satellites from both the ground and space.

"So we're seeing a period of great competition that is moving its way into space, and the risks there are obviously from war fighting standpoint is precision navigation and timing," Ashley said. "We have great dependence on that."

Weather satellites and missile early warning satellites also could be targeted in a future conflict.

"There's a multitude of things that are potentially at risk," the DIA chief said, declining to discuss U.S. efforts to harden satellites against attack, and to stockpile rapidly deployable replacements. "And that is being addressed," he said.

The PLA report made no mention of China's space weapons or anti-satellite (ASAT) missiles, like the ground-fired missile used to destroy a Chinese weather satellite in a 2007 test, leaving thousands of pieces of dangerous floating debris that threaten both manned and unmanned spacecraft.

China has developed several types of anti-satellite missiles, including DN-2 and DN-3 missiles capable of attacking orbiting satellites in both high and low orbits.

China's other space weapons include ground-based lasers that blind or damage orbiting satellites, and orbiting robot satellites capable of grabbing and crushing satellites.

"China continues development of multiple counterspace capabilities designed to degrade and deny adversary use of space-based assets during a crisis or conflict," the Pentagon's most recent annual report on the Chinese military states.

According to the 2019 report, Chinese military writers have stated the goal of PLA space warfare is "destroying, damaging, and interfering with the enemy's reconnaissance … and communications satellites" along with navigation and early warning satellites. The objective is to "blind and deafen the enemy."

China also has created a Space Corps within a new service-level Strategic Support Force. The corps is believed to be the key space warfighting unit. 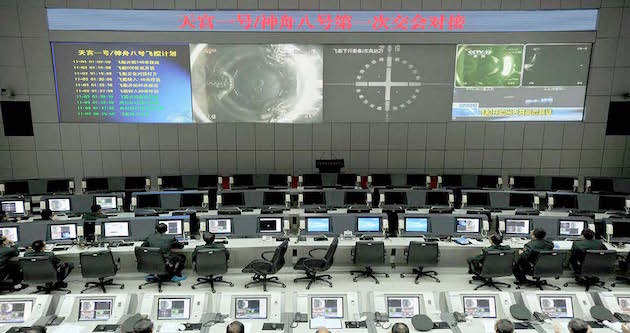 The Pentagon is establishing its own Space Force that will be under the Air Force.

However, the United States appears to be lagging behind China in developing space weapons. An anti-satellite missile program was killed in the 1980s. However, a Navy anti-missile interceptor was used to shoot down a falling U.S. satellite in 2008, demonstrating some ASAT capabilities.

By contrast, a 2018 intelligence report by the National Air and Space Intelligence Center (NASIC) stated that China is among the most advanced nations in building space weapons.

"Through military reforms, China and Russia have organized new military forces devoted to the employment of space and counterspace capabilities and regularly integrate them into military exercises," the report said.

The weapons include kinetic kill interceptors that destroy satellites by slamming into them at high speeds. Other space weapons include satellites armed with radiofrequency jammers, lasers, chemical sprayers, high-power microwaves, and robotic arms.

Orbiting satellite maintenance and debris removal systems now in the testing and research phase could be used to damage satellites, the report said.

Steve Lambakis, a former official at the Pentagon's Missile Defense Agency, said a key PLA objective is to use space weapons to cripple operations of the Hawaii-based Indo-Pacific Command during a future conflict by attacking American satellites.

"These operations would likely start with disruption and destruction of [command, control, communications, and intelligence] capabilities with cyber and kinetic attacks on satellites and ground assets in support of other Chinese kinetic capabilities," Lambakis said

Michael J. Listner, a China expert who specializes in space issues, said the latest white paper continues the earlier theme of outer space as a "commanding height" for the PLA but with the new facet identifying space as a critical domain for strategic competition.

The section on space in the white paper appears to be part policy and part propaganda in response to the United States' labeling of space as a domain of warfare.

"In doing so, the defense white paper overtly points to the United States as the aggressor in outer space, which is a common refrain of western, non-governmental organizations focused on outer space security, and postures its outer space capabilities as a deterrent response as opposed to an active counterspace capacity," said Listner, principal with Space Law and Policy Solutions, a think tank.

The PLA also is employing lawfare—legal warfare—techniques in promoting Beijing's claims to be adhering to four major space law treaties and agreements.

"As with all policy positions taken in other domains, the PRC's true intents in outer space are better gauged by its actions as opposed to its words," Listner said.

The white paper states that China is seeking international dialogue and agreements setting rules for space.

"China and Russia continue to endorse a draft ‘Treaty on the Prevention of the Placement of Weapons in Outer Space, the Threat or Use of Force Against Outer Space Objects (PPWT)," the report said.

"While this draft promotes ‘no first placement' of weapons in space, it fails to address a variety of anti-satellite weapons and lacks meaningful verification mechanisms," the report said. "Furthermore, despite publicly insisting that space is a peaceful domain, these competitors are continuing development of several anti-satellite weapons."

In addition to space weaponry, China also is building cyber warfare capabilities and the white paper notes that cyber security "poses a severe threat to China."