A nonprofit group backed by some of America’s biggest companies and linked to Hunter Biden works closely with a Chinese Communist Party front group accused of trying to influence state and local policymakers.

Since 2015, the State Legislative Leaders Foundation has partnered with the Chinese People’s Association for Friendship with Foreign Countries, a Communist Party-affiliated propaganda organization. In 2010, a foundation adviser facilitated Hunter Biden's first business trip to China.

U.S. officials have voiced concerns about the Chinese People’s Association, saying that Beijing uses it to influence the West. The U.S.-China Economic and Security Review Commission said in a 2018 report that the association performs intelligence and propaganda functions for the CCP. Last year, the State Department pulled out of a national governors' convention because of the group’s involvement in the event. Then-secretary of state Mike Pompeo said that the association sought to "malignly influence" local leaders.

The State Legislative Leaders Foundation is funded by nearly 70 major companies and industry groups, including Facebook, Google, Comcast, and Apple. It hosts forums for leaders in statehouses across the country. The group also hosts summits for legislators and major corporations, both domestic and international.

Founded in 1972, the foundation’s first foray into China was in 2009 at a summit arranged by Michael Lin and James Bulger. The two businessmen would later join Hunter Biden at a private equity firm that brokered a controversial deal to sell a U.S. auto parts maker to a Chinese government-linked aviation company.

The foundation has developed extensive contacts in both the United States and China. Last week, its president Stephen Lakis gave a keynote speech at a summit for some of the top think tanks in the United States. The summit was hosted by the China Public Diplomacy Association, another CCP-linked front organization that has Chinese People’s Association members on its board. Officials with the Chinese government, state-controlled media outlets, and Beijing’s main foreign-language propaganda agency spoke at the event.

California Senate Majority Leader Robert Hertzberg, a director of the foundation, was also a panelist at the forum. The Democrat is one of the country’s most prominent state lawmakers to appear at the group’s China-focused events. California state financial disclosures reviewed by the Washington Free Beacon show that the Chinese People’s Association and State Legislative Leaders Foundation have each paid around $7,500 for Hertzberg’s trips to China summits in 2016, 2018, and 2019. Photos of the events posted on a Chinese social networking site show Hertzberg met with Chinese Communist Party provincial leaders on at least two of those trips.

While the State Legislative Leaders Foundation does not outwardly lobby, it appears to serve as a matchmaker of sorts for its corporate donors and state lawmakers. That dynamic is highlighted in emails from Hunter Biden’s laptop obtained by the Free Beacon.

Bulger told Biden the deal "might be disconcerting to local stakeholders such as Unions and local elected officials concerned about job losses to an overseas buyer."

"In order to mitigate such valid concerns it would be wise for me to meet local elected officials (through SLLF contacts) and brief them on our plans for the business post purchase," Bulger wrote.

Biden responded to the email saying he was worried offshoring jobs would generate negative press.

The deal eventually went through. Aviation Industry Corporation of China bought a controlling stake in Michigan-based parts maker Henniges Automotive for $600 million. BHR Partners, the consortium to which Biden and Bulger belonged, held a 49 percent stake in the deal.

The two partners arranged Biden’s first business trip to China in April 2010. The trip was highlighted in a report that Senate Republicans released last year on Biden’s foreign business dealings. Republicans said that Biden’s visit led to future business opportunities for him in China.

Months before that junket, Lin and Bulger organized the State Legislative Leaders Foundation’s first summit in Beijing. Lin said in a speech after the event that leaders from statehouses across the United States attended the forum, alongside Chinese government officials and senior executives from companies like Coca-Cola, Bank of America, and Bank of Beijing.

According to a transcript of his remarks, Lin said the summit could help China develop business relationships that could yield "new resources" and technology for Beijing.

State Legislative Leaders Foundation tax filings for 2009 show the summit was "held in conjunction with the Chinese government."

The foundation brought in between $3 million and $4 million in revenue each year for the past decade. Tax filings show that the group’s corporate backers contribute between $15,000 and $50,000 to serve on the group’s advisory council. The Motion Picture Association of America gave $45,000 to the group in 2017, while the Wireless Association gave $35,000.

Lin and Bulger entered a second partnership with the State Legislative Leaders Foundation and Lakis in 2018 through a venture called Michelangelo Investment Holdings Limited. According to the company’s posts on the Chinese networking website Sodu.com, Michelangelo joined the foundation’s advisory council in May 2018. The only other Chinese company on the advisory council was DJI, the Chinese drone maker. The Trump administration blacklisted DJI last year over its suspected ties to the Chinese government.

Michelangelo’s now-defunct website touted its links to politically connected figures, including Lakis, state lawmakers, and both Joe and Hunter Biden. An archived version of the website features an undated photo of Hunter Biden at a BHR Partners meeting. In another photo, Lin is seen posing with Joe Biden at an event in 2017. 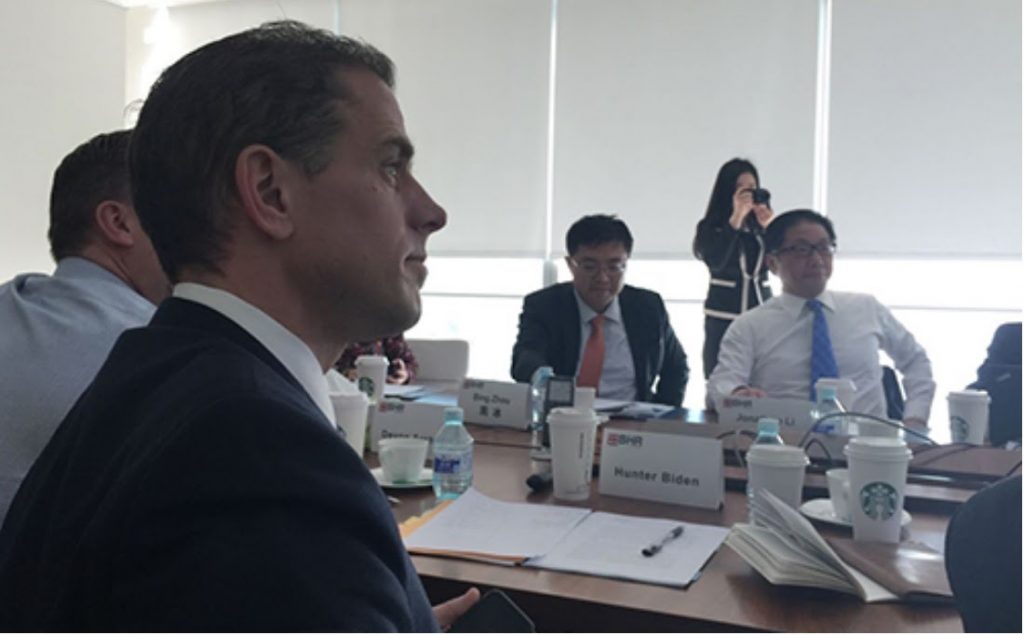 Michelangelo also posted a summary of Lin and Bulger’s meetings in the United States, as well as of State Legislative Leaders Foundation’s third China-U.S. Provincial and State Legislature Cooperation Forum, which was held on Nov. 29, 2018, in Las Vegas.

Dozens of state legislators from across the United States attended the forum, as did the president of the Chinese People’s Association, China’s ambassador to the United States, and several consular officials. The website says that Hertzberg, the California state senator, met with a Communist Party official from the Hebei Provincial Standing Committee. 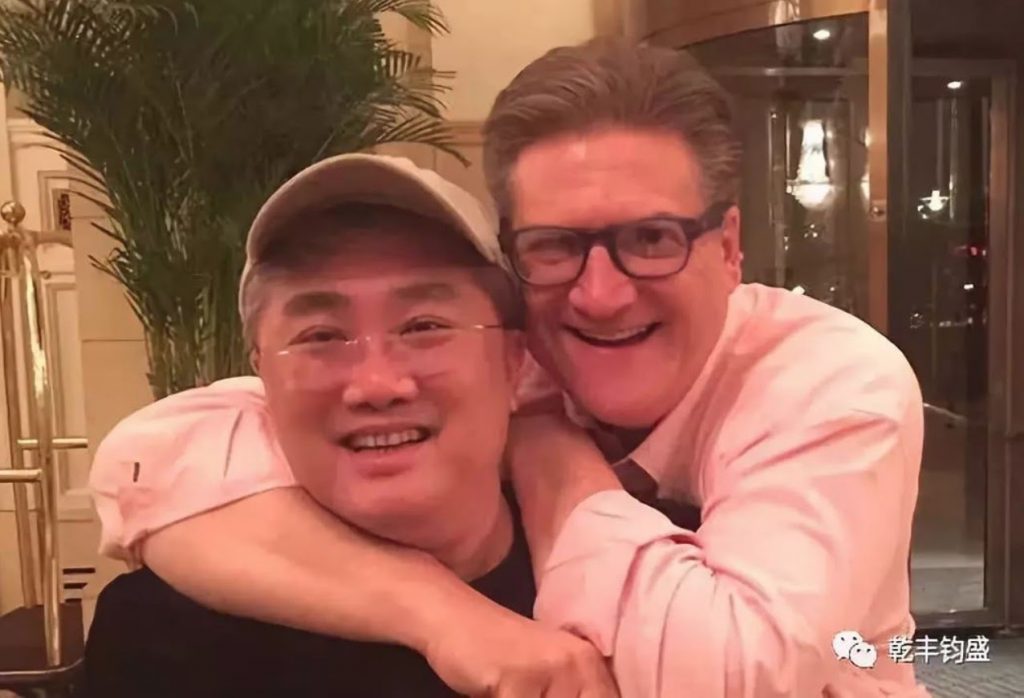