The newest aircraft carrier in the United States Navy's fleet, the USS Gerald Ford (CVN-78), began sea trials on Saturday as she left port for her first at-sea testing.

Escorted by tug boats and a Blackhawk helicopter overhead, the Ford slowly moved out past the Chesapeake Bay and into the Atlantic Ocean to begin its builder's sea trials.

The ship is the lead of a new class of aircraft carrier, the Gerald Ford Class, which will be able to carry more aircraft and will require less personnel than its predecessor, the Nimitz Class. It also marks the first time in 40 years the United States has designed a new carrier, the Navy said in a press release.

"The Navy and our industry partners are excited to have the future USS Gerald R. Ford underway under her own power for the first time, executing a rigorous and comprehensive test program for this first-of-class ship," Antonio said. "This milestone is the culmination of years of hard work and dedication, and we look forward to learning a great deal during sea trials. We will continue to work together to deliver Ford's critical capabilities to the fleet." 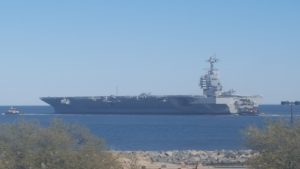 Built by Huntington Ingalls Industries in Newport News, Virginia, the Ford, which is able to sail at over 30 knots, can carry up to 75 aircrafts and will have a complement of slightly over 4,500 personnel. The new ship design is focused on having electrical systems replace the steam systems of the Nimitz Class.

Each ship in the new class of carriers are designed with the intention of saving the Navy $4 billion over the course of its lifetime.

From Sea to Shining Sea

Cotton Blasts Wokeness in the Navy