During a discussion on the former New York City mayor's failed presidential run, New York Times editorial board member Mara Gay told MSNBC's Brian Williams that "somebody tweeted recently that actually with the money he's spent, he could have given every American a million dollars." Williams then displayed the tweet in question from journalist Mekita Rivas.

"Bloomberg spent $500 million on ads, U.S. population, 327 million," Williams said. "He could have given each American $1 million and have had lunch money left over. It's an incredible way of putting it."

"It's an incredible way of putting it," Gay agreed. "It's true. It's disturbing."

It is not true. Very basic math indicates that $500 million could only provide 500 people with $1 million. If Bloomberg's election spending were equally spread across the U.S. population, each person would receive less than $2.

Before the MSNBC segment aired, Rivas's tweet had already been thoroughly mocked. Rivas doubled down and claimed that Bloomberg could easily give every American $1 million before locking her account and adding "I know, I’m bad at math" to its bio. 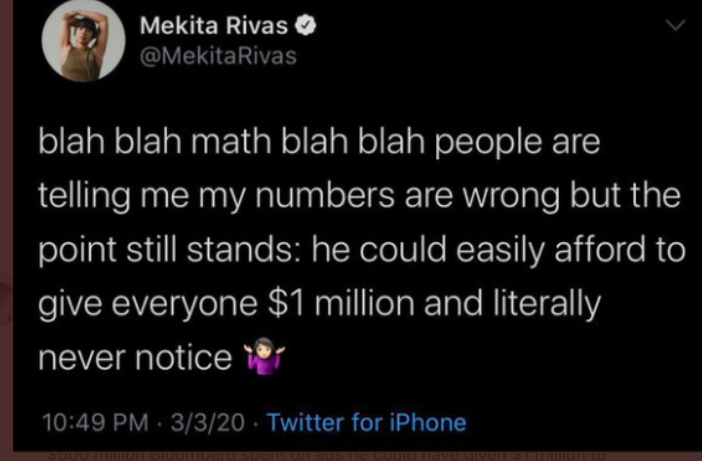