A Playboy journalist who went to bat for disgraced former representative Katie Hill (D., Calif.) after her resignation failed to disclose that they were dating at the time her scandal became public.

The New York Post reported Saturday that Playboy Washington correspondent Alex Thomas was seen at a book party with Hill, who resigned in October after photos of her nude with a campaign staffer emerged. Leaked text messages seemed to indicate that she was in a relationship with a congressional staffer in violation of House rules. On Monday, Hill confirmed in a New York magazine profile that she dated Thomas beginning in "mid-2019" and that "in August, they went on a beach vacation together."

In October, Thomas defended Hill on Twitter, reporting that the National Republican Congressional Committee was responsible for the RedState story that first published Hill's nude photos. Without disclosing his relationship with Hill, Thomas tweeted out a screenshot of what he claimed was a story "backed up with multiple sources and audio" that would "show that the NRCC was shopping around the Katie Hill images." 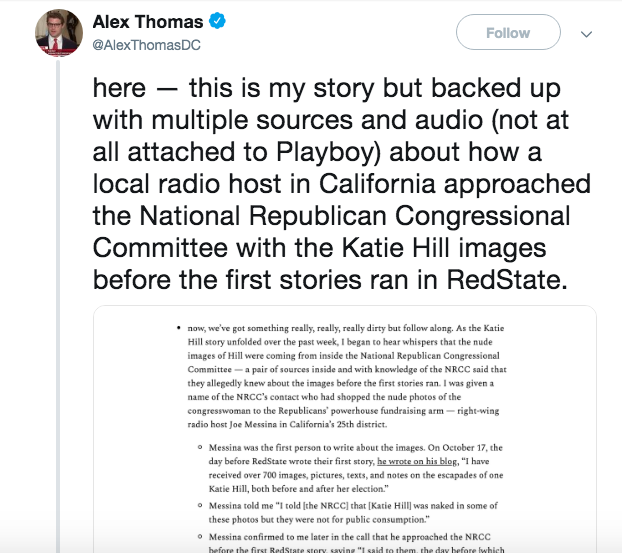 The NRCC disputed Thomas's tweets at the time, saying in a statement: "We never shopped, possessed or circulated photos of Congresswoman Hill. We didn't see the photos until they were published, just like everyone else." Thomas then walked back his claims, saying that the NRCC's denial "checks out actually" and that the organization "never had their hands on the photos." 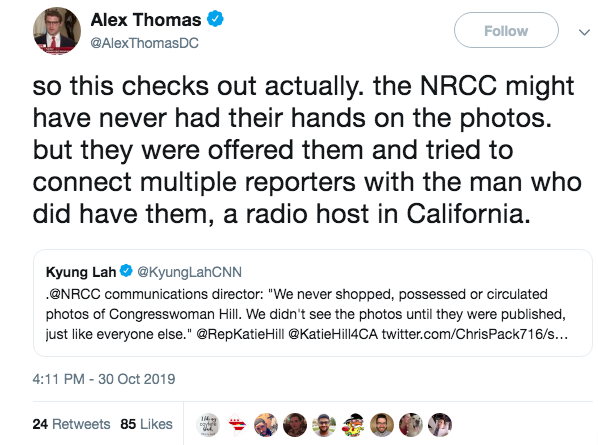 Thomas never disclosed that he was in a relationship with Hill from the beginning of the controversy. New York magazine reported that on the morning of October 24, Hill "woke up to news that the British tabloid the Daily Mail, one of the most-read news outlets in the world, had published a story featuring additional explicit photographs. Hill turned to Thomas and said, ‘It's over.'"

Playboy never ran Thomas's promised story on the Hill controversy, which instead ran on Thomas's personal newsletter. Both the newsletter and the tweets about Hill have since been deleted. Thomas, Hill, and Playboy did not respond to requests for comment.

RedState reporter Jennifer Van Laar told the Washington Free Beacon that Thomas also sent RedState emails about the story without mentioning his romantic involvement with the disgraced congresswoman. Van Laar, who broke the story in October, declined to share Thomas's messages because she is currently consulting with her attorney while working on a story of her own.

The NRCC said it was a "sad day" for journalistic ethics in a statement to the Free Beacon.

"It's baffling that someone who has sex with the subject of his glowing puff piece articles making now-retracted accusations against our organization is a credentialed member of the press," an NRCC spokesman said. "This is a sad day for proponents of journalistic ethics along with those who read Playboy for the articles."

The current relationship between Hill and Thomas is unclear. Thomas told the Post that they were "just pals," while the famously polyamorous Hill told New York magazine both that she has a new girlfriend and that "I'm new at being single, and I'm seeing a few people."