Discussion of Comedy Central's The Daily Show on MSNBC and CNN has tanked since Trevor Noah took over for Jon Stewart in 2015, a Washington Free Beacon analysis finds.

The drastic decrease reflects the loss of influence of Comedy Central's flagship show since Stewart's departure. While Stewart, in the news again with the release of his political satire Irresistible, was cited dozens of times per month on the left-leaning outlets, Noah is a comparative afterthought among the elites.

The Free Beacon's analysis did not include reruns. 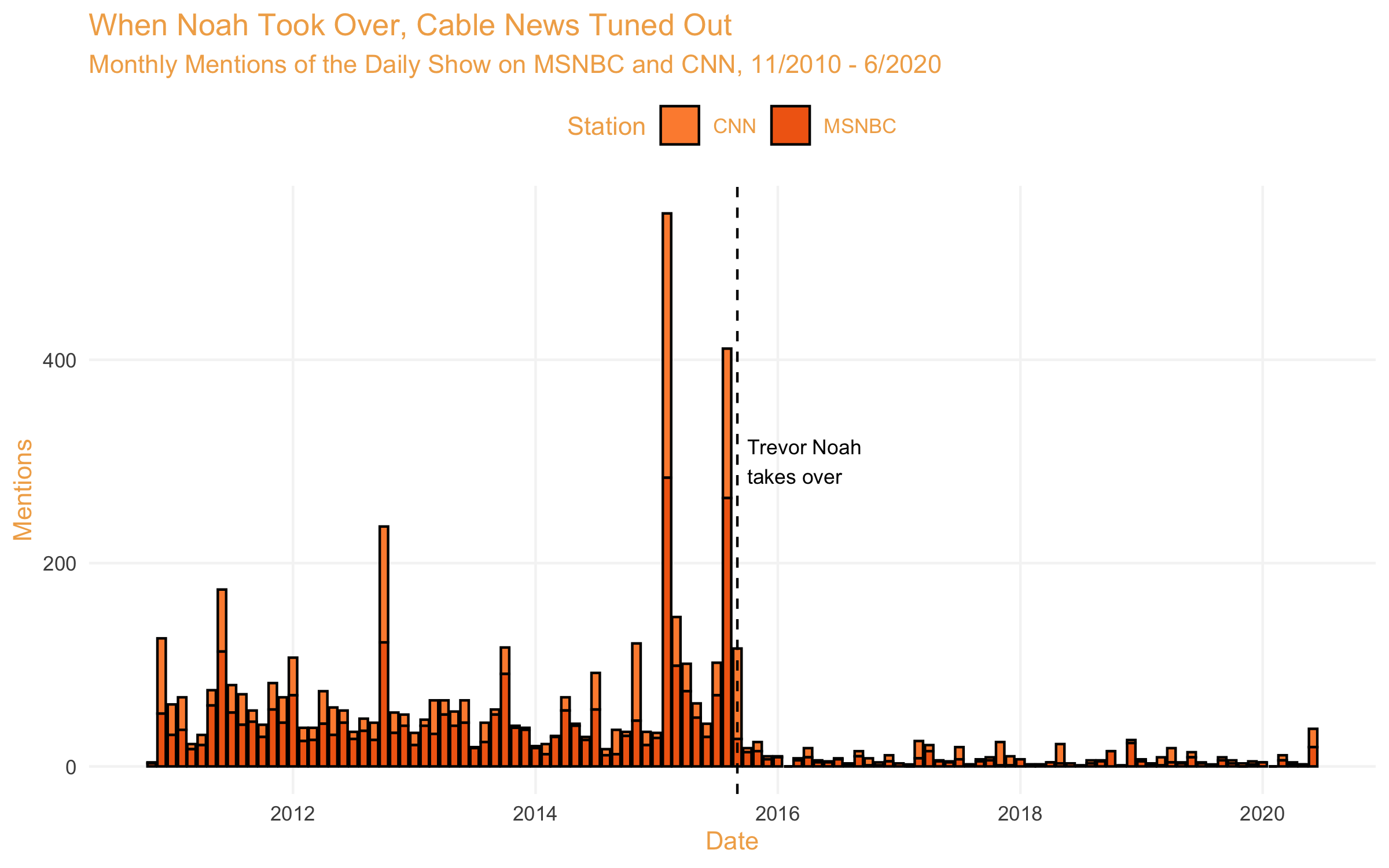 MSNBC (284) and CNN (260) mentioned Stewart and his program in February 2015—the month he announced his retirement—almost as much as they have discussed Noah and the show during Noah's entire tenure. MSNBC (264) and CNN (147) also extensively covered Stewart's final week on the show in August 2015.

Both networks leaned on Stewart clips in October 2012, the final month before President Barack Obama's reelection campaign against Mitt Romney. Stewart and The Daily Show received 226 mentions combined on MSNBC (122) and CNN (114) in that month. In October 2016, the final month of Donald Trump and Hillary Clinton's election battle, Noah and The Daily Show got just eight mentions from MSNBC (1) and CNN (7).

Besides a brief burst of attention when the largely unknown South African comedian took Stewart's position in September 2015, CNN and MSNBC have almost entirely ignored Noah. While he largely mirrors Stewart's left-wing sensibilities, he has a more cheerful persona than Stewart's sardonic one and focuses less than his predecessor on cable news.

After Stewart took over The Daily Show in 1999, the cable show transitioned from a focus on pop culture to skewering politicians and the media from a liberal perspective.

His departure was met with open mourning on CNN and MSNBC in 2015. On Aug. 6, 2015, the day Stewart signed off, Rachel Maddow hailed it as the "best news and satire show that our country has ever had."

"If you care about the kinds of things that you probably care about if you watch this show, it's not all that unreasonable to look at this event tonight, to look at Jon Stewart ending The Daily Show, and ask, 'Who are we actually going to be as a country after tonight's last Daily Show?" she said.

According to Kinetiq, Maddow has only mentioned The Daily Show three times in the last three years. Two of those times, it was in reference to Stewart.