If all goes to plan, on Monday white nationalist Daniel Lewis Lee will be put to death for the brutal murder of a family of three, including an eight-year-old girl—the first federal execution in 17 years.

Two other federal inmates, also convicted child murderers, are slated to follow Lee on Wednesday and Friday. There is a real possibility, however, that all three executions will be delayed yet again, as last-minute appeals again forestall the resolution of crimes committed, in Lee's case, nearly 25 years ago.

Should it proceed, Lee's execution will be the culmination of efforts, set in motion a year ago by Attorney General William Barr, to restart federal execution after a 17-year de facto moratorium. The decades-long pause is in large part thanks to conscious efforts by death-penalty opponents to shut down the popularly supported practice through procedural wrangling of the sort now on display in Lee's case.

That makes Monday's execution a particularly contentious political moment, pitting a president who has long been an outspoken proponent of the death penalty against activist groups, like the ACLU, who would see it abolished by any means necessary. Should it go forward, the Lee execution will likely spark renewed debate between these parties, especially as part of the larger dispute now playing out over the future of criminal justice in America.

A bevy of last-minute challenges to the scheduled executions have sprung up in recent days, arguing that the coronavirus crisis renders it unsafe to proceed. The family of Lee's victims—who have publicly opposed his sentence—requested a stay Tuesday, arguing that the pandemic makes traveling to see the execution unacceptably dangerous.

The ACLU has also filed a stay request on behalf of the religious counsel to one of the other men expected to be executed this month, arguing that the pandemic would place the Buddhist priest at risk as he carried out his religious duties. The results of both appeals remain unclear, but stays may be granted before Monday.

These challenges are just the latest efforts to forestall Lee's death, offensives which have been ongoing since Barr announced last July that the federal government would begin conducting executions again.

That plan was almost immediately challenged by the plaintiffs, who argued that the single-drug protocol for execution that the federal government intended to use was not equivalent to the protocol used in Indiana, where the executions were slated to take place, and therefore ran afoul of the 1994 Federal Death Penalty Act. That litigation eventually ended when the Supreme Court refused to take it up, clearing the way for executions to go forward.

All of these appeals seek to further postpone punishment for a crime that was committed over two decades ago. In 1996, Lee and accomplice Chevie Kehoe murdered William and Nancy Mueller, as well as their eight-year-old daughter Sarah. Kehoe led, and Lee was a member of, a white supremacist group that envisioned the erection of a white ethnostate in the United States, supported by the proceeds of their killing spree. Kehoe and Lee suffocated the Muellers, tortured and then murdered their daughter, and dumped their bodies into a bayou near Russellville, Ark., joking that their victims were now on a "liquid diet."

In spite of the heinousness of his crime, Lee has languished on federal death row since his 1998 conviction, thanks to an interminable appeals process. Lee should have exhausted his appeals years ago, according to Kent Scheidegger, legal director of the Criminal Justice Legal Foundation and one of the nation's most dogged death-penalty litigators.

"If you go through all the proceedings, you find several of them taking multiple years when they don't need to," he told the Washington Free Beacon. "And you find too many times going back to the well on the same case. The denial of his federal collateral review was affirmed by the Court of Appeals in 2013. That plus the petition to the U.S. Supreme Court to take the case should be the end of the case."

But, Scheidegger said, capital-defense lawyers have continued to file technical motions as a delaying tactic. That's common practice in death penalty cases, reflected in Bureau of Justice Statistics data, which show that executions conducted in 2017 were an average of more than 20 years overdue—a 478 percent increase from 1979. 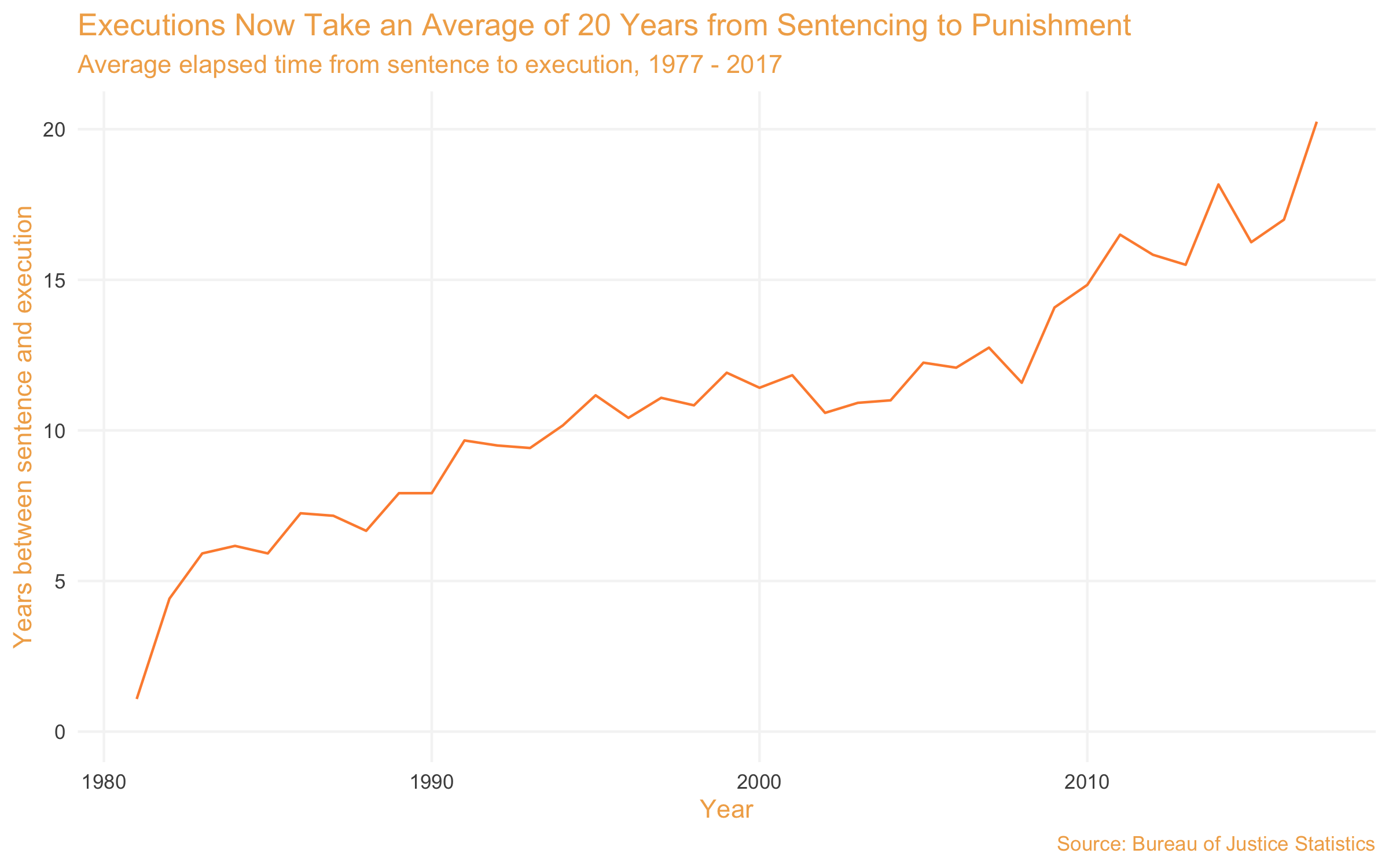 This interminable appeals process has repeatedly attracted the attention of the Supreme Court's conservative wing, which has characterized it as an effort to make an end run around the death penalty by rendering it procedurally moot. In one recent case, Justice Neil Gorsuch wrote, "Both the State and the victims of crime have an important interest in the timely enforcement of a sentence," adding that even death penalty opponent Justice Stephen Breyer's leading dissent acknowledges that "‘the long delays that now typically occur between the time an offender is sentenced to death and his execution' are ‘excessive.'"

The result is situations like Lee's, wherein a quarter-century-old crime's resolution remains in doubt with just days to go before the scheduled execution—or like the case of Vernon Madison, who killed police officer Julius Schulte and whose case went on so long that he developed vascular dementia before eventually dying in prison.

President Donald Trump—who once took out newspaper advertisements calling for the execution of the wrongly accused Central Park Five—has been a staunch advocate of capital punishment during his term.

Death penalty opponents found an ally in President Barack Obama, whose administration did not conduct a single execution and who ended his term issuing two commutations for federal death row offenders.

Presumptive Democratic nominee Joe Biden looks set to go further—his platform officially calls for abolishing the death penalty, a view reiterated as recently as Wednesday. That view puts him out of step with the majority of Americans, who have supported the death penalty since the 1970s. But it also means Lee's execution—and the resumption of the federal death penalty thereby—may become a point of conflict in the pre-election national debate, one driven by disputes over the criminal justice system and the evils of racism of the sort Lee so readily displayed.