Five Million Americans Back to Work in June

The overall unemployment rate fell to 11.1 percent in June, the Bureau of Labor Statistics reported, with drops in unemployment across all sexes and ethnic groups. Those hopeful topline figures, however, obscured what Adam Ozimek, chief economist at freelancing platform Upwork, told the Washington Free Beacon were "ominous signs below the surface."

In particular, while 4.8 million people who had been temporarily laid off (thanks largely to the coronavirus crisis) returned to work in June, the number of individuals reporting a permanent job loss rose by 588,000 to 2.9 million—a sign of more American businesses folding amid the ongoing shutdown.

"Given that demand remains so weak in leisure and hospitality and other sectors, and so many small businesses remain short on cash," Ozimek said, "we're going to see continued small business failure in coming months and that means more permanent job loss."

That underlying ambiguity is likely to be at the heart of congressional negotiations in the coming month, as Republicans and Democrats spar over whether to extend, modify, or let lapse the massive expansion of unemployment insurance passed in March. It will also stunt the jobs report's political usefulness, constraining both President Donald Trump's ability to tout it and Democratic nominee Joe Biden's leverage for criticism. 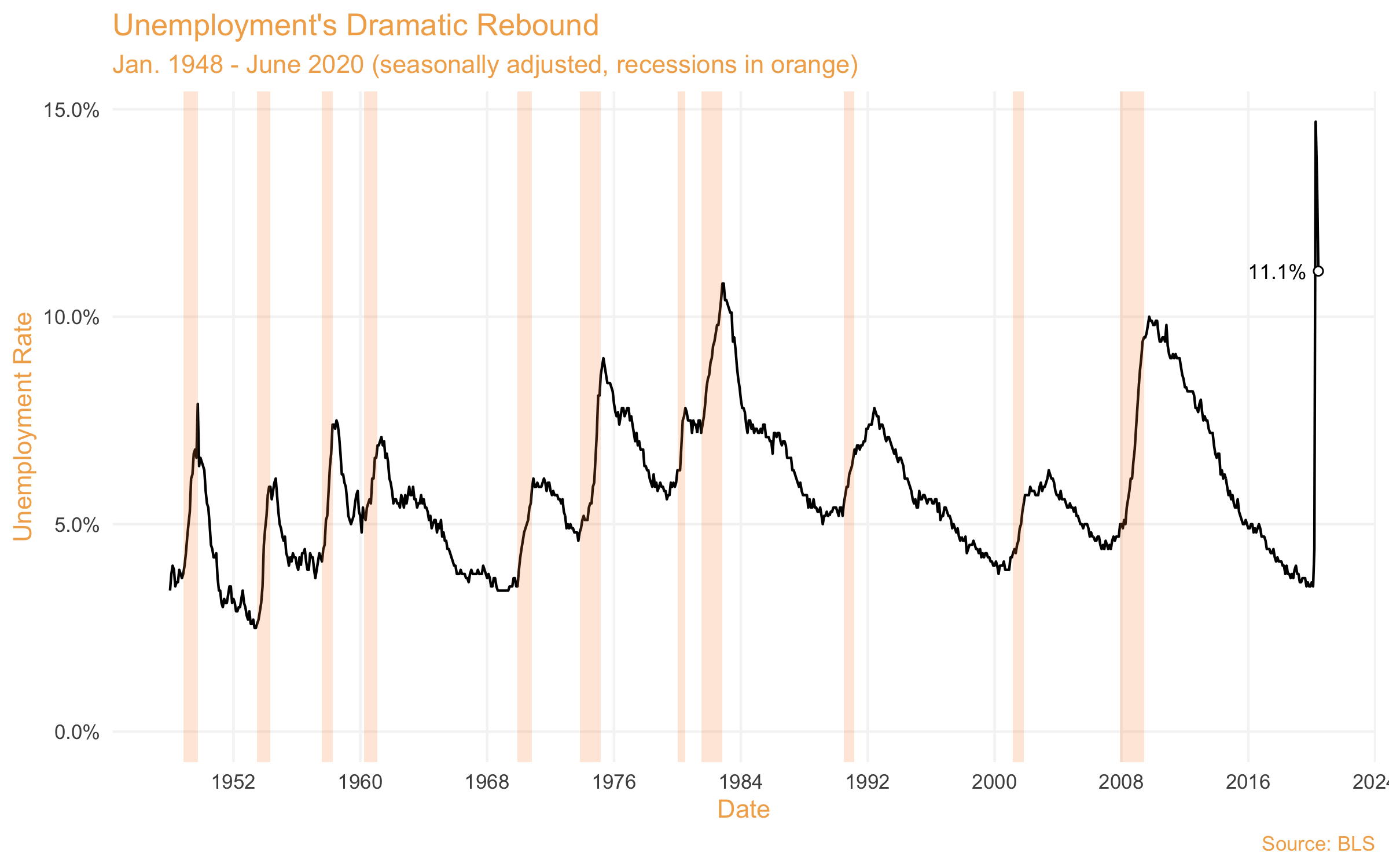 Much of June's return to work was driven by the leisure and hospitality industries, previously battered by the coronavirus shutdown, which recovered 2.1 million jobs last month alone. That trend likely reflects the reopening of restaurants and bars as many states lift their coronavirus quarantine orders.

Ernie Tedeschi, an economist with macro advisory firm Evercore ISI, told the Free Beacon that the overall increase represents "two consecutive months of historically large jobs growth." Average job growth in May and June—3.8 million added jobs a month— has been "faster than many economists including me expected," Tedeschi said."

President Donald Trump heralded the results Thursday morning, describing it as "spectacular news for American workers and American families, and for our country as a whole."

"Today's announcement proves that our economy is roaring back," Trump said. "It's coming back extremely strong."

At the same time, the new job numbers offer cause for caution. Tedeschi noted that unemployment still remains elevated above both where it was in February, before the coronavirus crisis, and remains higher even than its worst point during the Great Recession. May and June's job increases have only recovered one third of jobs lost during the recession.

Recent surges in coronavirus cases in major states like Arizona, Texas, and California are also leading governors to reengage some economic restrictions. That, Tedeschi cautioned, means that "the July jobs report could be far weaker, or even negative again."

The overall jobs increase also obscures a deeper disparity. The coronavirus shutdown prompted many small business owners to close their doors temporarily, allowing employees to go on expanded unemployment with the expectation that they would return to work when restrictions were lifted. Most of the recovery in jobs is attributable to those returning workers—but hundreds of thousands of other workers report having lost their jobs permanently—a sour sign for the long-run health of the economy.

"There are now 1.6 million more who say they are permanently unemployed than pre-crisis," Ozimek said. "This means 1.6 million new jobs must be created by expanding or new businesses, and this takes time."

Karl Smith, vice president for economic policy at the Tax Foundation, told the Free Beacon that he finds this increase particularly worrying, suggesting it augurs "the beginning stages of a major recession."

"That it's at the beginning means there is still time to head this off, but it also tells us that the underlying shock from the shutdowns is still rippling through the economy," Smith said.

How, or whether, to head off that longer-term economic damage will be at the top of lawmakers' minds as they weigh another round of coronavirus stimulus. The addition of $600 per person per month in unemployment insurance, established by the CARES Act in March, is scheduled to run out at the end of July. Democrats have loudly advocated for extending the benefit, while Republicans are divided over a reduced extension or cutting the funding altogether amid concerns that it is stymieing job growth.

Those decisions—and the economic situation overall—are likely to play a major role in November's general election, where Trump had hoped to run on the uber-hot economy he oversaw through February. The state of the economy in April through June has historically played a major role in presidents' reelection chances, political scientist Alan Abramowitz noted in March, with a one-point increase in second-quarter real GDP predicting a gain of 20 electoral votes for incumbents running for reelection since 1945.