Jewish leaders at Wake Forest University say they were excluded from a campus panel about anti-Zionism and anti-Semitism in February over their opposition to an associated campaign promoting solidarity with a Palestinian state.

The Jewish students protested the "Free Speech, Free Palestine" panel after, according to the students, the organizers of a week-long Palestinian solidarity campaign silenced their voices, the Algemeiner reported. The panel was designed in part to explain "the differences between anti-zionism and anti-semitism" and organized by the Young Democratic Socialists of America. The panel included only one voice from the school's Jewish community, Barry Trachtenberg, the director of WFU’s Jewish Studies Program.

Trachtenberg has endorsed the "US Campaign for the Academic and Cultural Boycott of Israel" as well as other programs associated with the Palestinian boycott, divestment, and sanctions movement against Israel. Jewish students sent emails to the YDSA, expressing concerns that Trachtenberg does not represent Jewish voices on campus, and should not be included on the panel.

"To suggest that Professor Trachtenberg represents mainstream Jewish thought is to deny reality," WFU Hillel president Molly Sugarman told the Algemeiner. "There is a very proud pro-Israel community at Wake Forest University, and we would have liked to have seen representation of diverse viewpoints, rather than the very one sided panel that we saw instead."

Organizers denied the request, and Jewish students decided to stage a protest. About 50 Jewish students showed up, wearing white shirts and some with blue tape over their mouths. The protest organizer carried a sign reading "Barry Trachtenberg DOES NOT represent us."

Critics of the event also pointed out a mock wall set up on campus covered in anti-Semitic messages, including "resistance is not terrorism," and an exhibition accusing Israel of the "murder of children" and criticizing the International Holocaust Remembrance Alliance's (IHRA) definition of anti-Semitism. Earlier in the week, the exhibitions were removed after a student reported that he was "highly offended" by their content, but they were put back up after Jewish students were allowed to erect a counter exhibition celebrating Israeli history.

Wake Forest released a statement following the incident, saying that as a college it "is committed to creating a campus environment where a wide diversity of ideas and perspectives are expressed," and "providing all students the right to speak, write, listen, challenge and learn."

Sugarman was not so optimistic. "It was a missed opportunity for a constructive community dialogue," she told the Algemeiner, adding that she was disappointed to see "such a blatant display of antisemitism" throughout the whole week. 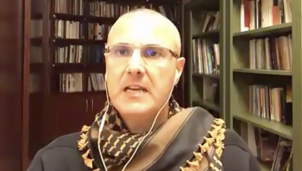