Eight Virginia localities became sanctuaries Thursday night, bringing the total to 93, including 75 of Virginia's 95 counties and 18 of its legally independent cities. The movement—which pushes local governments to declare that they won't enforce new gun laws they deem unconstitutional—has seen grassroots support from people of all backgrounds and ages in both rural and urban Virginia. It shows no sign of slowing, despite Northam promising a grandfather clause omitting preexisting owners from his proposed gun ban and threatening "consequences" for areas that become sanctuaries.

The continued momentum of the movement, especially in blue parts of the state, may weigh heavily on the new Democratic state legislature when it convenes Jan. 6. It has already forced Democratic leadership to abandon SB-16, a bill that would have completely banned possession of AR-15s and many other guns. As opposition continues to grow, newly elected Democrats may continue to shy away from the more radical parts of Northam's gun-control agenda.

Fauquier County was among those that saw huge turnout Thursday. The Washington Free Beacon witnessed several thousand people adorned with "Guns Save Lives" stickers outside of the board of supervisors meeting in Warrenton, Va. The gun-rights advocates waited in the freezing cold for hours to voice their support. Those who spoke with the Free Beacon said they were not moved by Northam's concession or threats.

"I have guns that they're talking about banning," Crystal Kiffer, a dentist and lifelong Fauquier County resident, told the Free Beacon. "It's gonna be a tough, tough day if I don't get to hold onto my guns. I'm not going to let them go."

Gary Gray, who showed up with his teenage daughter and a sign that read "The British Are Coming!" was concerned that despite the defeat of SB-16, Northam's still-live proposal to register certain firearms will still lead to confiscation.

"Any erosion of our constitutional rights is just the beginning," he told the Free Beacon. "This is just the tip of the iceberg on what they ultimately want, which is complete gun confiscation across the whole United States. These United States were founded with firearms. All the other rights we have are only guaranteed because of this right."

Gray's concerns about confiscation were informed by state rep. Donald McEachin's (D.) warning that the National Guard could be called out to enforce new gun-control laws if local authorities refuse to. The governor's office did not respond to a request for comment on whether he is considering using the National Guard to enforce gun control. 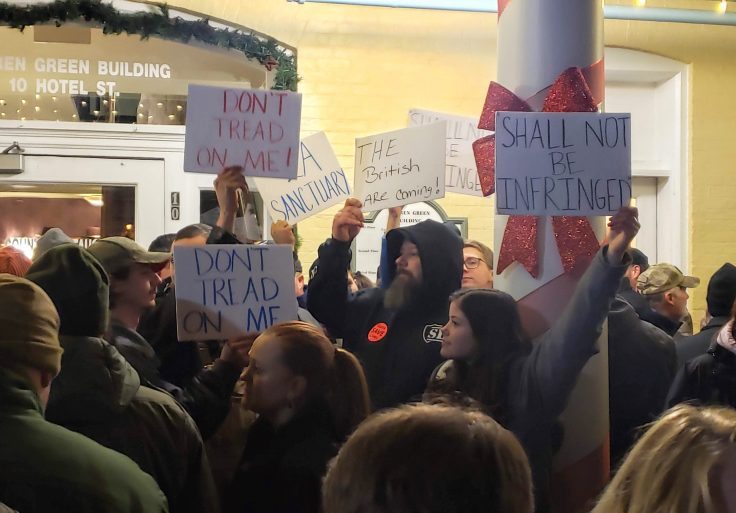 Kaitlyn Gray, Gary's 18-year-old daughter who arrived to the meeting with a sign that read "Shall Not Be Infringed," said she was also worried about the threats.

"It's scary that this is happening," she told the Free Beacon.

Gray and her father didn't let the threats dissuade them from publicly supporting the sanctuary resolution, however. They also do not view the grandfather clause as a reasonable compromise.

Laird Taylor said he was concerned that confiscation could happen before courts could intervene and wanted the county to promise it would resist any such efforts.

"I'm a peaceable man and I'm not trying to make any trouble at all now, nor do I intend to, I simply would like to have my rights under the Second Amendment preserved," he told the Free Beacon. "I see them about to be infringed and I'm offended by that."

Taylor said the sanctuary movement has driven him to become more involved in local politics than he had ever been before. He signed up to become a member of the pro-gun Virginia Citizens Defense League and spoke before the board of supervisors for the first time since moving to the state.

"This is more than just ‘don't take my guns away,'" Taylor said. "This is a larger issue as I see it and I'm kicking myself in the rear end as a citizen to get myself smart in things that I probably should have before. Better late than never."

Fauquier County's board of supervisors did not vote on the Second Amendment resolution before them Thursday night, primarily because many of the dozens of people offering public comment decried it as too weak.

"We're gonna send a message to staff to go find some ‘teeth,'" Christopher T. Butler, chair of the Fauquier County board of supervisors, said as he adjourned Thursday's meeting.

The board scheduled a Dec. 23 meeting to consider a revised proposal. They appear poised to pass a resolution even more favorable to gun rights.

Gary Gray summed up the feelings of many of the supporters when he responded to the idea of a gun confiscation law with, "Three simple words: will not comply."