"Sorry, son, you can’t go back there. Congressmen only," the elderly Knight of Columbus tells me as I attempt to enter the VIP tent at the 46th annual March for Life.

He’s surrounded by a whole cadre of fellow knights, all decked out in white flak jackets with the huge KofC logo on them. They’re trading jokes, shuffling in the mud, and smoking cigarettes. One of them is passing out devotional cards with a prayer addressed to the Blessed Virgin Mary.

Grant that all who believe in your Son
May proclaim the gospel of life
With honesty and love
To the people of our time.

Maybe in the Senate, it’s easy characterize the Knights as bigots, but out here on the National Mall, I only see dads. They’re handing out hats to cold-eared pro-lifers. They’re praying with the old church ladies. They’re running security with big, dorky walkie talkies. 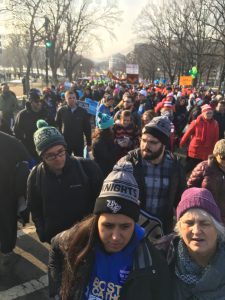 When SK Patrick Ambrogio leads the 200,000 marchers in the Pledge of Allegiance, the crowd cheers. And they don’t stop cheering for the next hour. Because after Ambrogio—and a blessedly brief Ben Shapiro interlude—Vice President Mike Pence and his wife Karen Pence take the stage to preach the pro-life gospel.

"We gather here because we believe as our founders did that we are, all of us, born and unborn, endowed by our creator with certain unalienable rights, and first among these rights is the right to life," Pence says.

"I love that guy," the woman behind me says.

"Be prepared to defend life, but do so with gentleness and respect," Pence continues. "They will attack you. They will question your hearts to silence others. But don’t listen to them. Listen to the truth."

The crowd cheers. Some nuns raise a banner of Our Lady of Guadalupe. A woman in a MAGA hat lights a cigarette. Pence lets the cheering go on for a bit before introducing President Donald Trump, with a special video message recorded for the march.

"This is a movement founded on love and grounded in the nobility and dignity of every human life," Trump tells the crowd.

Trump goes on to list his achievements for the pro-life movement: his reinstatement of the Mexico City Policy (which halts American foreign aid for abortions), his pro-life district court nominations, and his support for making the Hyde Amendment permanent. Trump also says that he sent a letter to Congress today informing them that if they send any legislation to his desk that weakens the protection of human life, he will veto the bill.

"Together we will work to save the lives of unborn children, so that they have the chance to live and to love, to thrive and to dream, and to bless our nation and reach their full and glorious potential," Trump concludes.

It’s a rosy image, but for the most part, Trump has consistently supported pro-life causes. Last year, he was the first president to address the March for Life. This past spring, he was the keynote speaker at the Susan B. Anthony List’s annual gala, where he affirmed that protecting the dignity of the unborn was one of the chief goals of his presidency. As far as pro-lifers are concerned, Trump’s support is a miracle, and they’re not about to question it.

And it’s a miracle that the March for Life happens so peacefully each year. Out on Constitution Ave., these tens of thousands of people agree on hardly anything—except that ripping children from their mothers’ wombs is a grave evil.

As I’m walking down the street, I run into Stan Rehn, a balding real estate financier from the Baltimore area. Rehn likes to come to the march every year and yell at Catholics. Now, I was only looking for my brother and his cigarettes—but instead, I got my fair share of abuse. 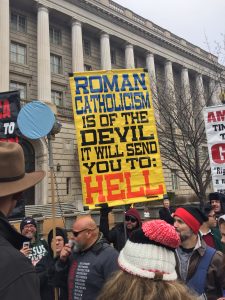 "You’ve lost your mind!" he exclaims.

A Hispanic woman gets in his face.

"No, you’ve lost your mind," she says. "You don’t understand our blessed mother."

Rehn leans toward her.

"You wanna stop abortion?" He speaks slowly for emphasis. "Stop praying to the Virgin Mary. Mary doesn’t hear your prayers."

A few blocks later, I run into Kevin Gallagher, of Weird Catholic Twitter fame. I tell him the story. He winces.

But there would be no point. Rehn and his ilk are antagonists—pro-life antagonists, sure—but engaging with them only deepens the divisions that have kept the pro-life movement from any serious chance at overturning Roe v. Wade. The right to life is bigger than religious and political differences.

Or so Democrats for Life representative Christian Matozzo tells me as he and a couple buddies lean against a streetside barrier outside the still-closed National Gallery of Art.

"Look, we’re all here for one issue," he says. "We’re all pro-life. We all believe in the sanctity of life. I don’t think that your particular affiliations should dictate where you stand on the issue. When we act that way, the only people who lose out are the unborn children and the moms who are trying to bring their kids to term."

Up ahead, the Knights are at it again. They’ve got their own loudspeaker, and they’re drowning out the noise of the crowd with a public rosary. As I pass them, I catch the end of the Hail Mary: Pray for us sinners now and at the hour of our death. Amen.