Prosecuting illegal immigrants, or banning them from obtaining a visa, substantially reduces their likelihood of attempting to cross the border a second time, a new study concludes.

Although it only discusses a policy rolled out between 2008 and 2012, the study may have major implications for President Donald Trump's zero tolerance approach to immigration enforcement, which still requires the prosecution of most childless border crossers.

The paper is a collaboration between two university professors and three researchers with the government-funded Institute for Defense Analyses. To conduct their analysis, the authors obtained detailed, person-level data on apprehensions at the southwestern border between fiscal years 2005 and 2012. They used fingerprint data to link repeated apprehensions, building a picture of who crossed the border and at what time.

The researchers were interested in the effect of the U.S. Border Patrol's Consequence Delivery System program. Rolled out between 2008 and 2012, the CDS set up three different levels of sanctions for the people that USBP apprehends: precluding the detained person from acquiring a visa in the five years following detention, repatriating the person at a location far away from where they entered (to stymie efforts to reconnect with smugglers), and criminal prosecution.

Because of how the CDS was rolled out—piecemeal across the various border patrol sectors over four years—the paper's authors were able to take advantage of pseudo-random variations in its application to ask: to what extent did the CDS's consequences stop people from trying to reenter once they had been apprehended? In other words: to what extent does punishment deter illegal immigrants from attempting to cross the border again?

The effectiveness of the CDS is further supported by a survey of apprehended migrants, which found a stark decline in the number of people saying that they intended to try again once deposited back across the border. Eighty-eight percent intended to try to reenter in 2007; by 2013, that rate was 49 percent.

If its results are accurate, the study provides important insight as to what interventions are most effective at deterring illegal immigration. The number of people apprehended at the southwestern border is at record lows, a phenomenon that many have attributed to Mexico simultaneously experiencing an aging workforce and a steady growth in its wealth. What the paper suggests is that perhaps a shift to a more consequence-focused model of enforcement may also have played a role.

Historically, the general approach to reducing illegal immigration has been to focus on resources—increasing the number of Border Patrol agents, or building a border fence, as was done in 2006. In other words, policymakers have tried to increase the certainty that an offender would be apprehended, rather than altering his incentives by proposing to punish apprehended border crossers.

For most of the past half-century, a person apprehended at the southwestern border by the U.S. Border Patrol has simply been summarily "returned," i.e. dropped off at the border and sent back in to Mexico. The majority of apprehended people did not face any administrative sanctions, nor would they expect to go before a judge or spend time in a jail cell. The USBP preferred this approach given the sheer volume of people they were responsible for dealing with every day.

In the mid-1990s, the Clinton administration began to crack down on illegal immigration, in part by increasing the proportion of apprehended illegal immigrants who faced some form of penalty for their illegal crossing. The shift in policy is captured in the spiking percentage of people who are deported under an official order of removal, rather than simply being summarily returned. 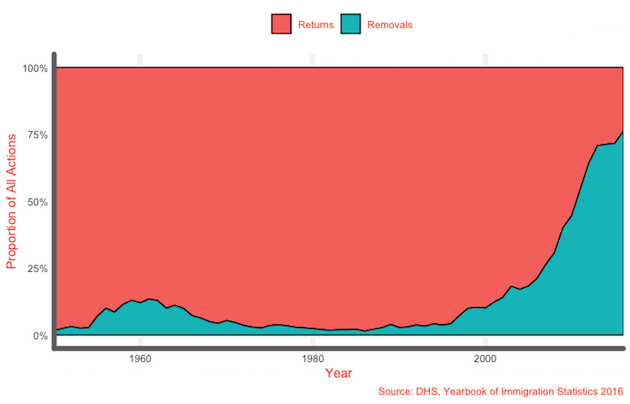 The paper indicates that, more so than an increase in the resources for enforcement, substantive consequences for crossing the border illegally deter people from doing it again. As such, the shift towards exposing immigrants to administrative consequences may have helped to cut levels of illegal migration, and they may now be at historic lows because of that shift.

All of this of course is tied to the Trump administration's immigration policy. Attorney General Jeff Sessions's instruction to southwestern-border U.S. Attorneys to prosecute all border crossers still stands, although its application to families remains in legal limbo. Prosecution initially showed lackluster results, but the administration pointed to month-on-month declines in border apprehensions in June and July as evidence of the program's success.

Whether or not zero tolerance will work—or even be implemented—in the long-run remains to be seen. But the evidence does seem to indicate that there is reason to believe that it will long-run keep illegal immigration levels low.