The Supreme Court heard oral arguments Wednesday morning in a case in which the plaintiffs allege that Google took advantage of a feature of class-action law to funnel millions in settlement funds to friendly universities and programs while leaving nothing for consumers.

If successful the suit could, as Manhattan Institute director of legal policy James Copland put it, stop trial lawyers from "dol[ing] out clients' money as treats to their favorite charities."

The case, Frank v. Gaos, grew out of a class-action lawsuit brought by appellees Paloma Gaos, Anthony Italiano, and Gabriel Priyev on behalf of 129 million consumers against Google. That case, Gaos v. Google, claimed that Google had violated the class's privacy rights by "leaking" search terms to third-party marketers in contravention of its own privacy policy.

This happened, they argued, because Google transmitted the search terms used to reach a site to that site. Therefore, if a search term included identifying information (e.g., a person's name), a user would be deanonymized to third parties.

After four days of negotiations, the two sides reached a settlement of $8.5 million, as well as some changes to Google's FAQ explaining its use of "referral headers." Both parties agreed that attorneys' fees and administrative costs—totaling about $3.2 million—would be withdrawn from the settlement fund, leaving approximately $5.3 million for the consumers—about four cents per person.

This is where things get messy. Because of the small size of the payout-per-consumer, the federal district court decided that instead of paying each class member, the proceeds would instead be distributed through what's called a cy pres award (pronounced "sigh pray"). Cy pres is a process by which some portion of a class-action settlement is disbursed to charitable organizations rather than class members. Because of the size of the Gaos class, the settlement designated six recipients who got most of the remaining funds—class members themselves got nothing.

What is more, several of those cy pres recipients—Harvard, Stanford, the AARP, and the Chicago-Kent School of Law—had a preexisting relationship with Google. And three of the recipients were almae matres of the class attorneys who signed the settlement. This effectively meant that both sides transferred money to parties they had an interest in, rather than the consumers who were ostensibly meant to be remunerated for harm done to them.

It was this situation—$5 million for friends of Google and the class lawyers, nothing for consumers—that prompted class members Ted Frank and Melissa Holyoak, both attorneys at the Competitive Enterprise Institute and members of the Gaos v. Google class, to sue Gaos and Google in what is now Frank v. Gaos.

"This case is really about attorneys selling out their clients," Holyoak told the Washington Free Beacon. "We are arguing that this is unfair, and this is an abuse of the class action system, and an abuse of the cy pres system."

Specifically, Frank and Holyoak are arguing that the cy pres payout violates rule 23 of the Federal Rules of Civil Procedure, which stipulates that any class settlement must be "fair, reasonable, and adequate" with regard to redressing the claimed harm.

"Rule 23 says that class actions have to be fair, adequate, and reasonable. And we're saying this is just not fair to have money go to third parties, when it could go to class members, who are the actual clients," Holyoak said.

But the Ninth Circuit Court of Appeals, which heard the case before the Supreme Court took it up, disagreed. Its own precedent, the Ninth Circuit said, stipulated that a cy-pres-only settlement was acceptable "where the settlement fund is ‘nondistributable' because ‘the proof of individual claims would be burdensome or distribution of damages costly.'"

It is not yet clear if the Supreme Court will be more sympathetic to CEI's argument than the Ninth Circuit was, although its new conservative majority might be expected to join with the opinion of the Department of Justice, which filed an amicus brief in support of Frank and Holyoak. If CEI wins, however, it will have a major impact on the ability of large firms like Google to avoid substantial class-action liability, which could have significant repercussions for decades to come.

Woman Turns to Supreme Court to Get Her Guns Back 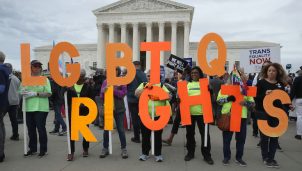