More than 20,000 parents, students, and educators packed into a tiny New York City park to demand access to charter schools on Thursday.

Esther Ansah arrived with her triplets out of gratitude for the success Simon, Samuel, and Naomi, have enjoyed at the Bronx Success Academy. One of the perks of having triplets is that it increases your chances of winning the city’s highly competitive charter school lottery. One of the 9-year-olds won the golden ticket in kindergarten; the academy accepted all three.

"Their charter is the best chance that they have at the future, so I knew I had to do that for them," she said.

The trio thrives at the school. One of them—Ansah isn’t saying whom—even skipped a grade. She can’t imagine what the transition to public school would be like if liberal New York City Mayor Bill de Blasio cracks down on charter schools to benefit his political allies in the teachers union. Her Bronx neighborhood is filled with nothing but failing public schools.

"I don’t know what I would do, but I know that they’d be taking away my kids’ future," she said.

The kids seemed oblivious to their perilous situation. They played with chalk, hopped on parked rental parks, and danced when Questlove took the stage for a free concert.

These are some of New York’s luckiest. More than 140,000 New York City students attend failing schools, according to rally organizers. The number is batted about by everyone who addresses the crowd. Parents, who wear red shirts that say "Don’t Steal Possible," look horrified.

Educators and entrepreneurs are stepping in to fill the gap. Steven Wilson, founder and CEO of Ascend Learning, opened his first charter school in Brooklyn in 2007 to counter the terrible public schools in the poorest sections of the borough. Wilson now operates seven schools with 3,000 students. He’s most proud of the school in Brownsville where students from one of New York’s toughest and most impoverished neighborhoods pack into classrooms to soak up a traditional liberal arts and college prep education. Ascend Learning had the highest English scores in all of Brooklyn in 2012. Wilson hopes the success of his students serves as a wake-up call to public schools.

"Any system that is isolated from competition is going to become sclerotic, bureaucratic, and unresponsive to those they serve," he said. "We should be welcomed [by politicians] for showing the system as a whole what is possible."

Wilson is more confident in his pupils than he is in New York’s leadership. He says the existing public school system has become "an employment system for adults, not an education system."

"If de Blasio is serious about ending inequality and increasing incomes, you would think he would be committed to helping the least privileged among us not get trapped in failing schools," Wilson said. "I’m hopeful he will change his views and see charters as an important tool for reform."

The education reformers and entrepreneurs from charter schools like the Success Academy and Achievement First have inspired more than just students. Teachers are also drawn to alternative systems. Guerschmide Saint-Ange left her job as a Hampton, Virginia public school teacher to return to her childhood home of Brooklyn. She joined the Achievement First school network because she "wanted to be inspired and to be passionate about my work."

Khadija Bonhomme-Kennedy left her career as a counselor in public and Catholic schools to take a job as a middle school math teacher at the West Harlem Success Academy.

"I was attracted to the rigor of the program. It raises the bar for the kids and for me. It pulls the kids higher than they otherwise would go," she said.

Parents hope that the same change that happens at the individual level can spread throughout the entire school system. Camille McKinnon doesn’t view charter schools as an enemy of the public school system. She sees it as a tool to help improve all schools.

"We all want the same type of improvements in our schools. We all want to make sure our children don’t get left behind," McKinnon said.

McKinnon’s daughter Blessing is a lucky girl. She won the charter school lottery as a kindergartener, but her mother’s health problems precluded her enrollment. McKinnon placed her in a public school. She regretted the decision almost immediately. "I realized that she was in a system where a few people make it out but most fall by the wayside," McKinnon said. She applied for the lottery every year before winning Blessing enrollment in the Bronx Success Academy.

Charter school opponents do not seem receptive to the idea of joining forces. Four women held a hastily-made banner that read "#RevealYourDonors Wall St? Wal-Mart?" A man in an orange New York Communities for Change shirt handed out flyers about soaking the rich. None could talk without the approval of a white guy clutching a Banana Republic bag, sporting two pierced ears, and wearing shoes that cost more than some of these families took home in a week—just the type of guy I want to talk class war with.

He promised to get me in touch with "one of our parents" and when she failed to materialize through his smart phone, he requested an anonymous, candid chat on the ills of charter schools. Charter schools, it turns out, are bad because hedge funds. Or something.

"They pay less taxes then turn around and give millions to charter schools. It takes away from public schools," he said.

"So you’d rather them not donate money to education?" I asked.

"Capital gains—you know? They pay less than you and me," he said.

We played this game for a couple of minutes. I asked him about education and schools, he talked about taxes and "bad money" from unsavory sources like Center for American Progress bankroller Walmart. Politics and schools are indistinguishable to the young man.

That kind of attitude frustrates Grace Yoo, a science teacher at the West Harlem Success Academy.

Yoo has been a teacher for three years at the charter school, but got her first taste of traditional public school work over the summer when she worked as a field experience manager at a Brooklyn public school. She discovered a system broken by bureaucracy, administrators out to take care of administrators and employees who cared more about politics than children. That is the system de Blasio is trying to protect.

"The choice is often do you side with the union or with the children? I’ll just say the mayor makes poor choices," Yoo said. "It’s all political to them." 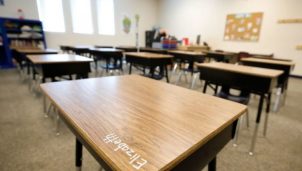