Data from Washington State show spikes among kids 12 and under

The number of children exposed to marijuana has risen significantly since the drug was legalized in Washington State, a new report from the Washington Poison Center shows.

The Poison Center, which is responsible for poison control and which catalogs self-reported instances of poisoning with marijuana products in the state of Washington, has seen a steady increase in reports since Washington State voted to legalize marijuana in 2012. 2017 saw the highest number yet: 378, more than double the number reported prior to legalization. 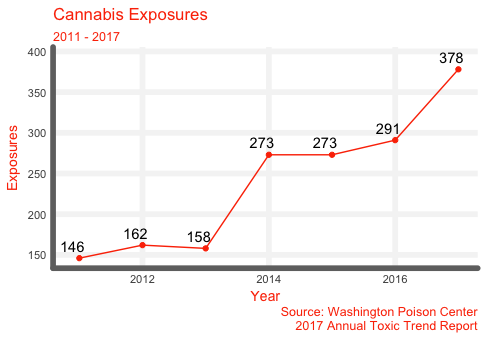 23.2 percent of individuals exposed to cannabis who contacted the Poison Center developed moderate or life-threatening symptoms.

In 2017, approximately 40 percent of all reports were for poisoning of Washingtonians age 18 and under, with the most regularly reported age category being those age 5 and under. There was a 57.7 percent increase in the number of under-fives exposed to marijuana between 2016 and 2017. This boost is likely tied to the passage of a second law increasing the number of marijuana retail outlets.

Smart Approaches to Marijuana, a public advocacy group that opposes marijuana legalization, tied the increase in youth exposure to marijuana to the availability of "edibles," which add THC to sweet treats like cookies, lollipops, and brownies. At least 43 percent of poison center reports are were for edibles, with another 33 percent attributable to "unknown."

Edibles, SAM argued, are "highly appealing to children," and have "flooded" the market in the wake of legalization.

"This report is extremely troubling," said Kevin Sabet, president of SAM. "As Big Marijuana continues to churn out kid-friendly edibles, more and more young children are ending up in emergency rooms. The preponderance of data show that marijuana has a damaging effect on developing brains but reports such as this get swept under the rug as lawmakers rush to liberalize drug laws."

Marijuana is currently legal for recreational use in nine states and the District of Columbia; a further 21 states allow medical marijuana. Last week, Senate Minority Leader Chuck Schumer (D., N.Y.) introduced a bill to remove the drug from schedule of drugs under the Controlled Substances Act, effectively decriminalizing it at the federal level.