Hawley sounds the alarm on economic roots of deaths of despair

Life expectancy in Missouri fell by nearly a year between 2012 and 2018 as the region has grappled with an epidemic of opioid, suicide, and alcohol-related deaths, according to a new report.

A report from the Missouri Department of Health found that the state's life expectancy fell in 2018, continuing what Sen. Josh Hawley (R., Mo.) described in a Thursday speech as many years of decline. A Missourian born in 2012 could expect to live about 0.8 years longer than a Missourian born in 2018—a staggering decline, given the overwhelming trend of increases in life expectancy around the world.

This decline reflects national trends, a multi-year life expectancy drop of the sort that occurred at the height of the 1990s AIDS epidemic and the influenza epidemic of the 1960s. According to the Missouri Department of Health, the state's decline is not the result of a graying population, but rather "a reflection of increases in death rates among younger persons for external causes such as drug overdoses, suicides and homicides." 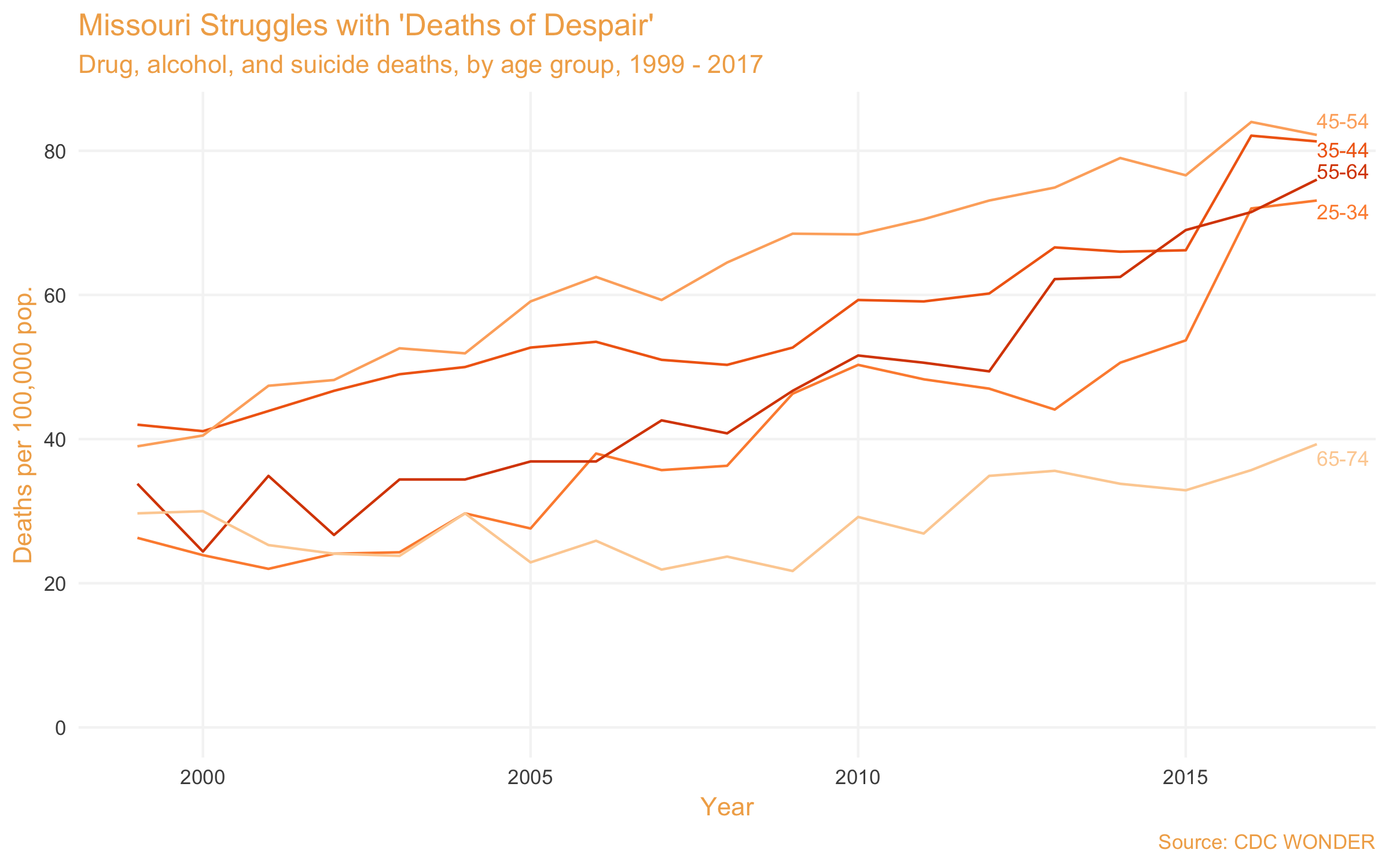 Specifically, young and middle-aged Missourians—ages 25 to 55—have borne the brunt of these increases. Within Missouri as a whole, the state Department of Health said, "from 2008 to 2018, suicides increased by 53.5 percent, accidental deaths by 33.6 percent and homicides by 30.7 percent."

The staggering increases of early mortality, often described as "deaths of despair," have attracted the attention of state and national lawmakers. Hawley said addressing the epidemic must be a top priority.

The term "deaths of despair" describes not one crisis but several and is often misused, but originally referred to declining life expectancy among low-status white Americans, many of whom live in deindustrializing, midwestern states like Missouri.

In Hawley's view, these deaths reflect an economic malaise driven by the collapse of middle-skill work, which is chewing through much of America's working class.

"These numbers are tragic, but they are more than that," Hawley said. "They are the signs of a crisis. We are witnessing the slow-motion collapse of the working class in America. All Americans suffer from deaths of despair, but we know from the evidence that it is working people and working families who are hit hardest."

This collapse is well-documented. A recent report from the St. Louis Federal Reserve showed how the white working class has steadily shrunk over the past 40 years. Some of that shrinkage is a result of individuals moving into higher status jobs and earning more income. But as some rise, those at the bottom fare worse—as one recent paper noted, "middle-age mortality increases among non-Hispanic whites are driven almost entirely by changes in the bottom 10% of the education distribution."

Hawley emphasized that social decay is not just a challenge for whites, but for all Americans.

"The struggle of working life today … is a struggle shared by white and black alike, and by everybody of every race," he said. "The breakdown of family and neighborhood, the loss of good work and the epidemic of addictive drugs—these things know no racial boundaries."

Hawley connected this breakdown to concrete policy decisions on trade, immigration, and finance made over the past few decades. U.S. trade liberalization, in particular, appears to have disproportionately harmed low-skill American workers who have seen their jobs offshored as the American manufacturing sector has collapsed. This collapse has been directly connected to the rise of "deaths of despair." Hawley said the rise in early death among the working class can only be addressed if lawmakers address the root cause of regional economic decline.

"The working people of this country, their future and their families that are going to define the future of our country," Hawley concluded. "That is what we should be debating … because this is what is going to define our time."

Homeland Security Solicited Twitter To ‘Become Involved’ in Disinfo Board