'When they give us that inch, that bump-stock ban, we will take a mile'

The March for Our Lives rally in Washington, D.C., held on Saturday focused mainly on calls for a new ban of certain guns and ammunition magazines.

A series of emotional and passionate speeches bookmarked by performances from celebrities, students, and activists called for a number of sweeping new gun-control proposals as a response to the shooting in Parkland, Fla., which left 17 dead. The speeches focused heavily on banning America's most popular rifle, the AR-15, and similar firearms as well as banning so-called high-capacity magazines, though details on what the protesters believe constitutes a "high-capacity" magazine were sparse. The crowd, which CBS News estimated to be 200,000—or less than half what the organizers requested space for in their permit application—was filled with signs advocating for a new ban on "assault weapons." 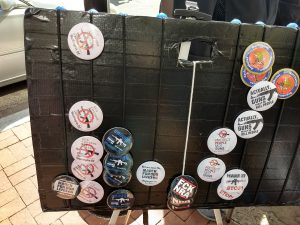 Pins for sale at theMarch for Our Lives / Stephen Gutowski

Delaney Tarr, a student from Stoneman Douglas High School, said in her speech that everything the marchers were doing was in support of their goal of achieving new gun-control measures.

"All for that assault weapons ban, to keep these weapons of war out of the hands of civilians who do not need them," she said. "All for the prohibition of high-capacity magazines because no hunter will ever need access to a magazine that can kill 17 in mere minutes."

Tarr said the activists would take both the big and the small.

"When they give us that inch, that bump-stock ban, we will take a mile," she said. 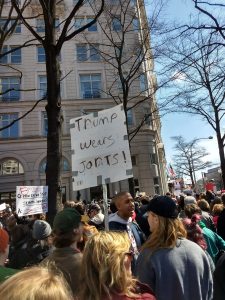 Sign at the March for Our Lives / Stephen Gutowski

After accusing Senator Marco Rubio (R., Fla.) of not valuing the lives of the students killed in Parkland, student Sarah Chadwick said the goal of the activists is to vote out those who don't agree with their goals.

"I say one life is worth more than all the guns in America," she said to cheers from the crowd. "This is not a red vs blue issue. This is a morals issue. To the politicians that believe their right to own a gun comes before our lives, get ready to get voted out by us."

However, despite the focus on banning undefined "high-capacity" magazines, Florida state senator Lauren Book (D.) told the Miami Herald the Parkland shooter used 10-round magazines during his attack. 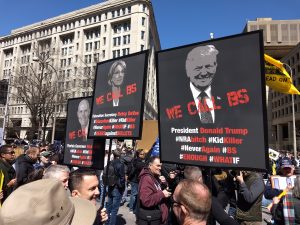 Protest signs at the March for Our Lives / Stephen Gutowski

The activists recently set up a 501(c)(4) dark money group, a common way to organize politically active nonprofits, to plan and fund both the march itself and future activism to impose the new gun-control measures they support. The group is not required to disclose its donors but is able to participate in political speech so long as it is not the main focus of the group's expenditures.

The students said they would not hold back in advancing their goals. Attacks on the National Rifle Association as well as Republican-elected officials were common both on stage and in the crowd. Signs carried by protesters ranged from jokes about President Trump wearing jean shorts to calls for bans on AR-15s to attacks on Rubio's Catholic faith complete with a blood cross draw on his forehead. A group of counterprotesters that set up in the middle of the intersection at 10th Street and Pennsylvania Avenue were mostly ignored by the crowd, except for the occasional profanity-laced scream from marchers. 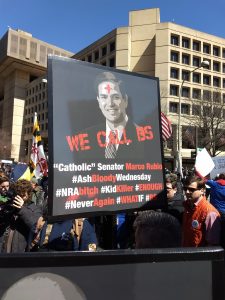 Anti-Rubio sign at the March for Our Lives / Stephen Gutowski

Protesters were generally cordial with the Metropolitan Police Department officers and National Guard troops assigned to police the event. The Free Beacon did observe a protester with a "Grandma Says Fuck The NRA" sign taped to a stroller bearing a small child yell at a caravan of police cars as they tried to make their way through the crowd near 12th and Penn. She was accompanied by a man who had symbolically put duct tape across his mouth to indicate he was marching on behalf of those who have been silenced, he began yelling "whose streets? Our streets!" through the duct tape. Nobody joined his chant.

The speakers encouraged the crowd, of which a third or more appeared to be made up of school-aged kids, to register to vote throughout the event. Volunteers from the League of Women Voters and the Democratic Party of Virginia were stationed outside of different Metro stations helping register any attendee who was interested in voting.