The New Jersey man who was arrested for illegally carrying a gun despite having a valid permit is exploring legal action against authorities after charges were dropped on Friday.

Roosevelt Twyne's lawyer told the Washington Free Beacon he is researching legal avenues for recovering damages from the Roselle Park Police Department and the prosecutor's office. Attorney Evan Nappen said Twyne, who has been on unpaid suspension from his job as a licensed security guard since the February arrest, is "extremely pleased" the case was dropped. He said, however, there are significant issues left to resolve, and Twyne is looking at the best way to seek damages over the ordeal.

"We still need to get his gun back," Nappen told the Free Beacon. "We're working on that. Then, of course, you want to clear the record with expungement so he doesn't have an arrest record. We're looking at and weighing the options on further civil action."

Nappen said the civil case faces significant legal hurdles, but it is a necessary step to prevent New Jersey gun owners from being put through similar circumstances by law enforcement officials. Twyne's situation has also prompted Republican lawmakers in the state to call for changes to gun laws in order to better protect owners.

"New Jersey's over-zealous gun laws have enabled scenarios where law-abiding citizens—in this case, a security guard nonetheless—are being prosecuted," Assemblyman John DiMaio (R.) said in a statement. "Unfortunately, those good intentions have bad consequences. We want to fix that."

The Republican bill would clarify the state's restrictions against hollow-point ammunition, which is commonly used for self-defense in the rest of the country. Twyne had initially been charged with illegally carrying restricted ammunition despite public guidance from New Jersey State Police that the polymer-tipped rounds he had were legal. The Union County Prosecutor's Office admitted as much in its statement dropping all charges against the security guard.

"Mr. Twyne, who is an employee of Brinks, produced a permit to carry the weapon, which was subject to certain conditions," the office said in the statement. "In particular, the permit was expressly limited to the time he was on-duty with Brinks. At the time of the stop, Mr. Twyne was not on duty with Brinks—and, accordingly, he was not legally permitted to carry a weapon at that time."

The office said Twyne was stopped 16 minutes after leaving work, was cooperative with law enforcement during the arrest, and there was no evidence he intended to break any law. It decided to exercise "prosecutorial discretion" in dropping both the ammo and gun-carry charges against Twyne.

"The UCPO is the oversight agency for our county who approved the charges in this matter," he told the Free Beacon. "Probable cause for this arrest was present and the defendant did not follow N.J. firearms transport laws. I cannot comment beyond what the extensive press release states."

Nappen disputed the idea that Twyne did anything wrong and said the police and prosecutor in the case misinterpreted New Jersey's complicated gun laws. He said state law requires anyone who wants to transport a firearm to either obtain a valid gun-carry permit, as Twyne does, or rely on certain exceptions to the law which allow for transporting handguns but only while unloaded and locked away. He claimed law enforcement in the case ignored Twyne's license.

"If you have a carry license, you don't utilize the exemptions. You're not going anywhere with an exemption, you're carrying by way of the license," Nappen told the Free Beacon. "So, they're saying they're dropping the charges pursuant to an inapplicable exemption that's inapplicable because he has a license and inapplicable because it doesn't exist based on their misinterpretation of ‘place of business.' That is the legal argument why they're utterly wrong on what is in their statement."

As he explores options for how best to pursue action against the authorities, Nappen credited the public outcry against the case for forcing New Jersey officials to drop the charges. He said media attention was key to raising public awareness of Twyne's situation, adding that the outpouring of support around the country helped prevent a drawn-out legal battle.

After news of the arrest made its way into the public eye, leading gun-rights groups, including the National Rifle Association, Second Amendment Foundation, and Firearms Policy Coalition came to Twyne's support. Grassroots supporters also emerged as 2,566 people donated $61,449 to a legal defense fund set up to support him.

"It got to a point where I think they just realized, given all the pressure, that the smartest thing for them to do, which is absolutely correct, was to dismiss the case," Nappen said.

Nappen said he expects Twyne to return to work while he explores possible legal recourse for the arrest. 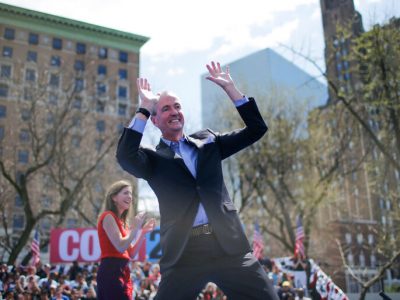