Carla Coleman, a current employee in Grayson’s Washington office, appears on Grayson’s most recent SEC filings as holding positions for two separate hedge funds run by the congressman—both of which do business in the Cayman Islands and have come under heavy scrutiny in recent weeks.

Coleman was hired in January 2013 as a scheduler and office manager for Grayson’s main office. The SEC documents showing her position within the funds were released in late 2014—more than a year and a half after she was hired to be part of the congressman’s staff.

"Ms. Coleman has a part-time position with the Fund and is paid by the Fund. This job is completely separate from her responsibilities in Rep. Grayson’s Washington, D.C., congressional office," Scudder said in an email statement.

"It’s not correct to say that she has ‘administrative duties for Rep. Grayson's hedge funds while working out of the Washington, D.C., office.’ Her administrative duties for the hedge fund are not performed in the congressional office, and she does not use any congressional office resources when performing those duties. She is not ‘senior staff’ under the Ethics Reform Act, and therefore she is allowed to do any outside work."

However, Matthew Whitaker, executive director of the Foundation for Accountability and Civic Trust, said congressional staffers do not always have to be senior staff to be prohibited from performing certain outside jobs.

A staff member "should not undertake any outside employment that would involve the member personally in the selling or endorsement of any goods or services."  Any staff person (not just senior staff) has limits on employment selling goods and endorsement of services—(Coleman) can’t sell to any person that she came into contact through the congressional office or indicate her affiliation with the congressional office," Whitaker told the Free Beacon.

"I think it demonstrates Grayson’s ethical violations and his prohibited ties to the funds," he said.

In recent weeks, Grayson has come under fire for managing three hedge funds bearing his name while serving in Congress, actions that are in possible violation of House ethics rules.

"The House ethics rules do not allow a sitting member to ‘permit his name to be used’ in the name or advertising material for entities like law firms, associations and financial entities," Politico previously reported on Grayson’s dealings.

Two of the congressman’s hedge funds have combined to pull in over $25 million in sales.

Grayson Fund L.P, which is based out of Delaware and consists of three investors, shows sales totaling $13.2 million, according to November regulatory filings.

Grayson Master Fund (Cayman) LP, one of the funds based out of the Cayman Islands, shows two investors and an additional $13.2 million in sales.

After Politico first raised questions on the hedge funds, Scudder defended them by saying they are exempt from ethics rules that prohibit lawmakers from running financial institutions with their names attached.

"You can’t avoid fiduciary duty by saying ‘my investors are smart,’" Bernie Black, a professor at Northwestern University School of Law and Management, told Politico.

The hedge funds were created in 2011 after Grayson lost re-election.

Pelosi: ‘I Love Alan Grayson’ But Wish He Would Run for a Different Seat

Alan Grayson to Run Again for Congress, But He’s Not Sure Where 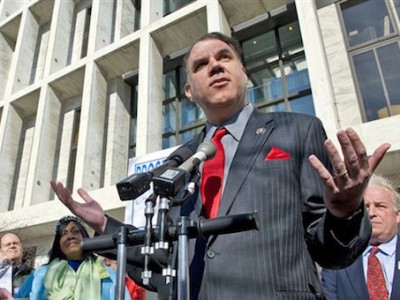